Earlier this week, Manga Entertainment UK release Part 1 of Studio Pierrot’s sequel series Boruto: Naruto Next Generations, an adaptation of Ukyō Kodachi and Mikio Ikemoto manga about the adventures Naruto’s son. Customers noticed a discrepency between the packaging’s listed Special Features and those included on the disc however: the listed “Boruto OVA” isn’t actually included in the release. We reached out to Manga UK for comment, who provided us with this response:

This is a misprint that has already been corrected for the next print run.

While the aforementioned OVA was included in Viz Media’s North American release of the set, the series’ Australian release by Madman will include the OVA in their Part 2. When asked if the OVA would be included in their Part 2 as well, Manga UK told Anime UK News that all Special Features were TBC at this time.

Manga UK describes the story of Boruto: Naruto Next Generations Part 1 as follows:

Meet Naruto’s son! His name is Boruto and he’s just like his dad – unfortunately. He’s rambunctious, rebellious, and more than a handful! He’s joined by the next generation of the Hidden Leaf Village – including Sarada, the daughter of Sasuke; and Mitsuki, a shinobi of mysterious lineage! Boruto and his friends have their hands full when they investigate a dangerous entity known as “The Ghost.” Can Boruto save the village just like dad?

Boruto: Naruto Next Generations debuted in Japan in April 2017, following the conclusion of the long-running Naruto Shippuden anime, and is currently being simulcast weekly by Crunchyroll. The manga is also available with new chapters serialised monthly in Viz Media’s Shonen JUMP app.

This is not the first OVA mishap the distributor has had this year, after our review of The Ancient Magus’ Bride Part 1 noted that the advertised 3-part Those Awaiting a Star OVAs were actually exclusive to the Blu-ray release. At the time, Manga UK confirmed with us that this was a result of sharing masters with US distributor Funimation, who released the series as a Blu-ray and DVD Combo Pack.

Credit to Jaysgba for the tip. 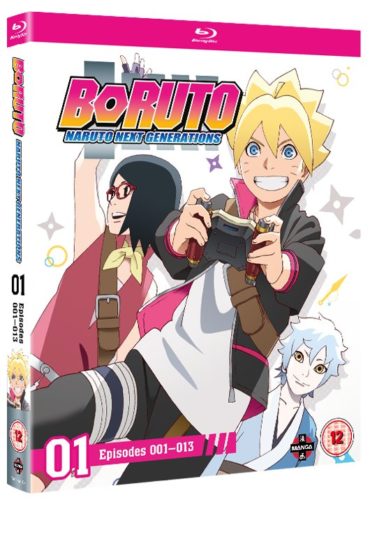 The story of Naruto’s son makes its second appearance in the UK, though its safe to say this second set focuses more on Sasuke and Sakura’s daughter Sarada than Boruto himself. Does this approach work or not? Let’s find out!