“Science is built up with facts, as a house is with stones. But a collection of facts is no more a science than a heap of stones is a house.” – Henri Poincaré.

Part of Weekly Shonen Jump, the opening volume of this post-apocalyptic manga has plenty of things going for it from the beginning.

It starts with typical student Taiju, who announces to his scientifically-gifted friend Senku that he is going to tell the girl that he loves, Yuzuriha, that he has been in love with her for five years. Meeting under a tree in the school grounds, just as Taiju is about to tell her how he feels, a bright light appears in the sky. Taiju pushes Yuzuriha towards the tree for safety, but it is of no use, as the light suddenly petrifies every human being on Earth. All of humanity is turned into stone.

Despite this, people’s consciousness remains, for a little while at least. For most people, they eventually lose it, but Taiju keeps his consciousness alive by his determination to both free himself and restore Yuzuriha to normal. As the days, weeks, months, years, decades, centuries and even millennia pass, finally Taiju breaks free from his stone shell, where he finds a message carved into the wood of the tree. This message leads him to discover that Senku has also broken free of his stone, keeping his consciousness alive by counting how long he has been stuck in this state. Thus, we know when Taiju broke free: 5th October, 5738.

With the two friends united, they begin work to rebuild civilisation from scratch, with Senku the brains and Taiju the brawn, as well as trying to figure out how to restore everyone, and the cause of the light. After several experiments, they eventually create a chemical to destroy the stone casing on people and release them. At first, they plan to release Yuzuriha, but when they are attacked by lions which have since escaped from zoos and bred over the centuries, the first person they release is someone Taiju recognises as Tsukasa Shishio, “The Strongest Primate High Schooler”. They free him and survive the attack, but as they prepare a new batch of the chemical to release Yuzuriha, Senku learns something disturbing: due to him being attacked by adults when he was younger, Tsukasa believes that only children should be revived, and he starts to destroy and thus murder the stone adults. A race to create two civilisations begins: Senku’s scientific society for all, and Tsukasa’s youthful utopia.

This opening volume serves mainly as a prologue. The main story starts in the second volume, if the chapter headings are anything to go by. However, there is already plenty in Dr. Stone to like. First is the story. Riichiro Inagaki (most famous for his American football series Eyeshield 21) not only creates a convincing picture of what would happen to the world if humanity vanished, but the character of the blonde scientist Senku is a great one. While in a typical shonen series it is the brawny guy who acts as the main hero, in this series it is the geeky one who steps up as the star, with Taiju providing much of the comedy, Yuzuriha the romance, and Tsukasa the problems. Senku creates realistic scientific solutions for the problems they encounter.

This is also combined with the artwork from the Korean-born artist Boichi (Sun-Ken Rock). The landscapes are wonderful, but it is the character designs that intrigue. Senku may be a science-loving nerd, but there is nothing nerdy about his appearance, with his over-the-top hair and stone-like cracks on his, and indeed everyone’s bodies as they are revived.

Aside from Senku, the other character who is the most interesting currently is Tsukasa. He seems to come across as Death Note’s Light Yagami on “Easy Mode” – not only does he have an incredibly strong body, meaning he can take anyone down in a fight, but just about everyone he sees as a villain has been fossilised, so he can kill them without any form of resistance. It will be interesting to see how he develops. Hopefully he won’t become a two-dimensional villain.

As for Taiju, so far his role has been comedic, serving as the idiot sidekick to Senku as well as the brawn, doing things that Senku is unable to do. When Yuzuriha is finally released halfway through the book, his relationship with her allows him to develop more as a character.

My only real concern in this opening volume is a translation issue. When Taiju finds the message carved into the tree, it is written in English rather than Japanese, and I wonder whether that would impact on the artwork.

As we have not entered the main body of the story, it is too early to say how big a hit Dr. Stone will be, if at all, but the early signs are promising. 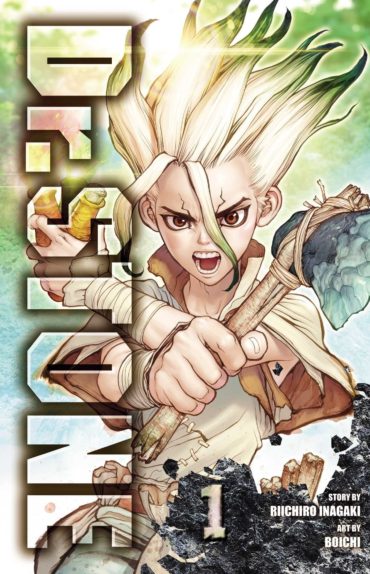 This prequel sees what happened to Senku’s father when the world turned into stone… and the robot he took with him to the ISS.