The list of their titles currently confirmed for release between October-December 2019 is below, listed by alphabetical order. (NOTE: Some of the trailers below were produced for other territories, so information may not match the UK releases).

A trip to the beach isn’t fun in the sun for Asta and the Black Bulls—they’re on a mission to recover a magic stone! Deep in the Underwater Temple lies new danger and mages with extraordinary powers. But getting in is the first challenge! Luckily, Noelle receives help from a mysterious girl with song magic to master a new spell to help her team. But real danger makes a splash when, Vetto of the Third Eye, storms the temple! He takes out Asta’s friends and allies, with unimaginable strength, like they’re nothing. Can the magicless mage face all odds and take on the beastly villain?

What’s scarier than facing an army of ninja warriors? School exams! As everyone scrambles to prepare, Sarada goes on a quest to uncover the secret of her birth and find out more about her father, Sasuke. Will she find the answers she seeks in this shadowy legend? Then Boruto and classmates take a trip to a place haunted by a bloody past—the Village Hidden in the Mist. This is one trip they won’t forget!

The Tournament of Power rages on. The 2nd Universe’s warriors of love are out for blood, Frieza makes his move, ad Goku’s attention turns to Jiren. Unflinching resolve faces immeasurable power, as Saiyan and Pride Trooper test each other’s capabilities. But when Goku’s stamina starts to dwindle, can Instinct save him?

Time is winding down, fighters are falling out,and the battles are heating up!

This is the story of a new Saiyan.

Earth is at peace after the Tournament of Power. Goku, knowing that there are ever-stronger forces in the universe he has yet to encounter, spends all of his time training to achieve another level. One fateful day, a Saiyan appears before Goku and Vegeta who they have never seen before: Broly. How can a Saiyan – who had all supposedly been annihilated after the erasure of Planet Vegeta – appear on Earth? With the return of Frieza from hell, a fierce battle awaits these three Saiyans who have followed completely different destinies.

The box office smash hit can now be added to your collection – the new movie from the global phenomenon series is now one of the only anime films to ever reach £1m at the UK box office.

Fruits Basket – Season One Part One

After a family tragedy turns her life upside down, 16-year-old high schooler Tooru Honda takes matters into her own hands and moves out… into a tent! Unfortunately for her, she pitches her new home on private land belonging to the mysterious Souma clan, and it isn’t long before the owners discover her secret. But, as Tooru quickly finds out when the family offers to take her in, the Soumas have a secret of their own‚ when hugged by the opposite sex, they turn into the animals of the Chinese Zodiac!

A young priestess has formed her first adventuring party, but almost immediately they find themselves in distress. It’s the Goblin Slayer who comes to their rescue–a man who’s dedicated his life to the extermination of all goblins, by any means necessary. And when rumors of his feats begin to circulate, there’s no telling who might come calling next.

Kaguya Otsutsuki suddenly emerges from Madara’s body. She is the mother of Hagoromo, the Sage of the Six Paths who entrusted his powers to Naruto and Sasuke. We learn about Kagura and Hagoromo’s history and about the Divine Tree, the birth of Ninshu, the ninja Creed and the rivalry between Indra and Ashura. Back to the Fourth Great Ninja War, Obito opens up to Naruto about his dreams and their shared desire to become Hokage.

Okko’s Inn is an anime film directed by Kitaro Kosaka, a key animator who worked on numerous classic films at Studio Ghibli, including Spirited Away and Princess Mononoke.

After losing her parents in a car accident, Okko goes to live in the countryside with her grandmother, who runs a traditional Japanese inn built on top of an ancient spring said to have healing waters. While she goes about her chores, Okko discovers there are spirits who live there that only she can see – not scary ones, but welcoming ghosts who keep her company, play games and help her navigate her new environment. The inn’s motto is that it welcomes all and will reject none, and this is soon put to the test as a string of new guests challenge Okko’s ability to be a gracious host.

Maka is a Meister and Soul is her Weapon. As students at the Grim Reaper’s Death Weapon Meister Academy, their study habits couldn’t be more different. But in battle against the supernatural forces of evil, they’re a freakin’ lethal team. That’s when Soul transforms – literally – into a razor-sharp scythe, and every defeated wicked soul he sucks down makes him more deadly. That’s when Maka unleashes the merciless slayer within, wielding her partner and dropping monsters. Seriously. Monsters. Like the witches, werewolves, and zombies that lurk in the shadows and feed on the souls of the innocent. Every freakish ghoul Maka and Soul take out strengthens their bond, and fighting alongside their fellow Meister/Weapon classmates, Maka and Soul are the world’s last line of defense against evil.

Thirty-seven-year-old Satoru Mikami is a typical corporate worker, who is perfectly content with his monotonous lifestyle in Tokyo, other than failing to nail down a girlfriend even once throughout his life. In the midst of a casual encounter with his colleague, he falls victim to a random assailant on the streets and is stabbed. However, while succumbing to his injuries, a peculiar voice echoes in his mind, and recites a bunch of commands which the dying man cannot make sense of.

When Satoru regains consciousness, he discovers that he has reincarnated as a goop of slime in an unfamiliar realm. In doing so, he acquires newfound skills—notably, the power to devour anything and mimic its appearance and abilities. He then stumbles upon the sealed Catastrophe-level monster “Storm Dragon” Verudora who had been sealed away for the past 300 years for devastating a town to ashes. Sympathetic to his predicament, Satoru befriends him, promising to assist in destroying the seal. In return, Verudora bestows upon him the name Rimuru Tempest to grant him divine protection.

Now, liberated from the mundanities of his past life, Rimuru embarks on a fresh journey with a distinct goal in mind. As he grows accustomed to his new physique, his gooey antics ripple throughout the world, gradually altering his fate.

All of the above titles are listed on Anime-On-Line with English and Japanese audio options. 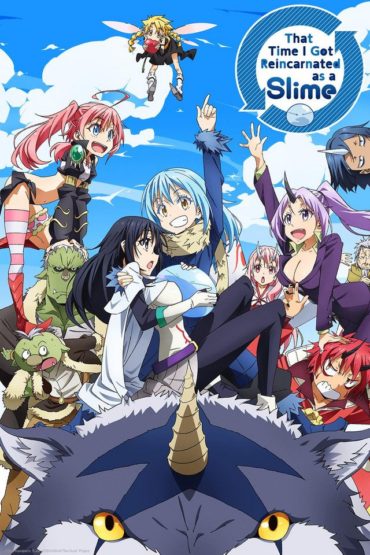