The Japan Foundation will launch their Touring Film Programme for a new run 2020 in ten days time. It is the 17th edition and runs from January 31st to March 29th across 22 venues in the UK. With 20 Japanese films due to be screened, many for the first time in the UK, audiences will experience a wide range of stories that look at joy and despair as people seek happiness.

Live-action adaptations of manga, a Kon Ichikawa classic, a highly-rated documentary and a Masaaki Yuasa anime make up the programme and all have been listed below with trailers, the two special guests announced and the locations across the UK where the films will be screened.

Takeo (SUZUKI Ryohei­) is a lovable giant admired by his fellow male students but struggling to find his own love story – girls tend to be repelled by his hulking looks or fall for his best friend (SAKAGUCHI Kentaro). That is until the day he saves Rinko (NAGANO Mei) from a pervert…

After participating in their school’s sack race, an unlikely romance begins between an introverted Hayama (NAKAJIMA Yuto) and outspoken Uemura (ARAKI Yuko). As their lives unfold over the next 7 years, can they overcome obstacles and continue sharing meals in good times and bad?

Mami (KADOWAKI Mugi) is an otaku and a hikikomori (shut-in). Worried about her future, Mami’s father finds her a job as a videogame tester, where she meets Ryotaro (MIURA Takahiro). Encouraged by him to draw game characters for the company, she takes her first tentative steps towards new opportunities.

Afflicted by muscular dystrophy, Yasuaki (OIZUMI Yo) doesn’t let that slow him down. A charming and eternally positive man, he is determined to live an independent life and fulfil his dreams with the help of coerced volunteers Misaki (TAKAHATA Mitsuki) and Tanaka (MIURA Haruma). Based on a true story.

As Tokyo burns in the wake of air strikes in the closing months of the Pacific War, nursery teachers led by Kaede (TODA Erika) scramble to evacuate the children under their care to an abandoned temple. A rare film showing the little-known realities of women on the home front who answered the call of duty in the face of adversity.

KAMEOKA Takuji (YASUDA Ken) is the perennial supporting actor, constantly typecast as background characters, from homeless to yakuza roles. Thirty-seven years old and single, he reaches a crossroads in his life when he meets a female bar owner (ASO Kumiko) that may change everything.

Sato (MIURA Haruma) is a singleton in his late 20s, longing for the perfect meet-cute to kick start his love life. One day, he meets Saki (TABE Mikako) in an unlikely encounter on the street, soon sparking a romantic connection. Is it a miracle? Based on a story by one of Japan’s most popular novelists, the story asks what is necessary in attaining happiness in a relationship.

Having relocated from the big city to a rural town, timid Yura (SATO Yura) feels isolated in his new Christian school. Initially sceptical of the new worshipping practice, he begins to have apparitions of a tiny, mute Jesus who seems to answer his prayers. But he should be careful what he wishes for…

Koh (INAGAKI Goro) leads a mundane life as a village charcoal maker – a profession he took over from his father. One day, an encounter with his old military buddy from the Self-Defence Force (HASEGAWA Hiroki) brings back complex memories, making him reconsider his passive existence.

Wishing to open up another line of communication with her rebellious teenage daughter, in the name of light-hearted revenge, single mother Kaori (SHINOHARA Ryoko) begins creating embarrassingly sweet messages in her child’s lunchbox meals. Will it work?

Little Shota (TERADA Kokoro) gets the shock of his life when he discovers that the father he looks up to plays the despicable heel wrestler, Cockroach. Once a star champion, Takashi (TANAHASHI Hiroshi) decides to overcome his injuries and re-join the wrestling big league to win back his son’s heart.

Filmmaker Nobutomo begins to notice gradual changes affecting her nonagenarian mother. Turning the camera on her parents’ life, she presents an intimate portrait of the highs and lows of a family living with Alzheimer’s and the reality of geriatric care in Japan’s super ageing society.

Yuko (HARA Hideko) wakes up in the hospital with amnesia, oblivious to her son’s death. Realising this, her family decides to innocently deceive the mother, pretending that he is alive and well, working in Argentina. Meanwhile, the rest of the family struggles to deal with their grief.

A gritty coming-of-age drama depicting the lives of a Hakodate bookstore clerk (EMOTO Tasuku), his co-worker (ISHIBASHI Shizuka), and housemate (SOMETANI Shota) as the carefree trio fight the sense of being adrift, hedonistically enjoying nightly escapades. But their happy days hinge on a delicate balance.

In a bid to rid himself of his crippling gambling addiction, Ikuo (KATORI Shingo) moves to his partner’s coastal hometown in an area recovering from the devastating 2011 earthquake. Initially adapting to the new environment, his vice soon catches up to him in a vicious cycle.

Makabe (YAMAZAKI Masayoshi), a first-class professional burglar, witnesses arson while on a job at night. The fire brings back memories of a past incident some 20 years before and sets in motion events which will determine his destiny.

The House Where The Mermaid Sleeps   (Dir: Yukihiko Tsutsumi, 120 mins.)

Teetering on the edge of divorce, a couple is faced with tragedy when their daughter becomes braindead with little chance of recovery following an accident. Confronted by an impossible decision, the parents must seek alternative solutions in a bid to keep her alive…

Progressive for the time of its production, this black comedy follows the undoing of a married TV producer and womaniser as the women in his life join forces in conspiring to kill him. Starring many representative figures of Japan’s silver screen, this stylish work by the director of Tokyo Olympiad is a rare treat praised by his contemporaries.

At Hyakkaoh Private Academy students are ranked on their gambling abilities rather than grades. The coveted prize for becoming the ultimate gambling champion is a ‘blank future’ that will give the winner autonomy over their life after graduation. Who will win happiness by betting on their lives?

After young firefighter Minato (KATAYOSE Ryota) rescues avid surfer Hinako (KAWAEI Rina), the two fall in love. But Minato’s life is cut short in an accident at sea causing the distraught Hinako to stay away from the ocean, until the day she hums their song and he appears in the water… OZAKI Masaya is perhaps best known as one of Japan’s most accomplished screenwriters. Mainly writing for TV dramas, the adaptations of his scripts such as that for Umechan Sensei (2012) have attracted a great number of viewers in the past few decades. Also a talented film maker, Her Sketchbook (2017) – a unique coming-of-age story of a young woman who has been socially excluded in Japan – is his second feature film, following his debut work Rendezvous! (2010). He also wrote the script for a feature film set on the Okinawan islands, A Yell from Heaven (2011), which was screened as part of the Japan Foundation Touring Film Programme 2015. OZAKI will attend special Q&A screenings of Her Sketchbook at: 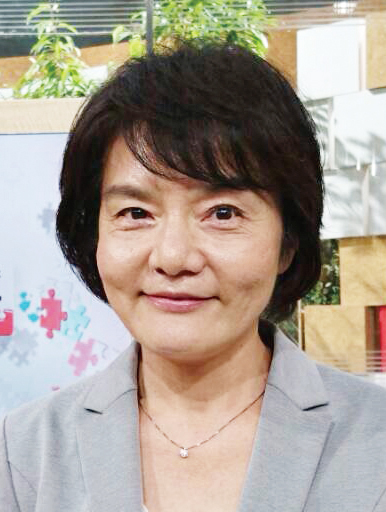 NOBUTOMO Naoko has been producing documentaries for Fuji TV since 1986. Her documentaries have tackled various social themes, most notably her own struggle with breast cancer. Her feature film debut, I Go Gaga, My Dear started off with just one screening in a regional city. As favourable reviews spread, it went on to be screened at over seventy cinemas in Japan as well as overseas. Documenting her small tight-knit family’s struggle to come to terms with her mother’s declining health due to dementia, this touching family film reflects on the common and timely issues existing in Japan’s ageing society while giving us an intimate insight into the director’s own life. NOBUTOMO will be available to answer questions on I Go Gaga, My Dear during special Q&A screenings held at:

A variety of these films will be screened in the following cities: