My Dress-Up Darling is a manga that delves into the world of cosplay – with a fair chunk of fan-service added to the mix.

The story follows Wakana Gojo, a high school student living with his grandfather, Wakana’s parents having died when he was younger. Wakana is keen to follow in his grandfather’s footsteps as a craftsman of hina dolls, but currently he has only mastered making the clothes. However, when he was younger, other kids hated him because his love of dolls made him different from other boys. Because of this, Wakana is a loner and has no friends at school.

When the sewing machine at home breaks, Wakana uses one of the school’s machines in the home economics classroom to make some doll clothes. However, he is spied upon by one of his classmates, a gyaru girl named Marin Kitagawa, who is the most popular girl in his class as well as an otaku. At first Wakana panics, but Marin loves the fact that Wakana can make these clothes. Marin then reveals that she is a secret cosplayer, but it is clear to Wakana that she is hopeless at making outfits, so Marin asks him to make an outfit for her.

Thus the sheltered Wakana finds himself having to make his first full-scale outfit, while becoming friends with extrovert with some questionable tastes. How questionable? Well, let’s just say that the first cosplay Wakana is asked to do is a character from a video game called Saint ♥ Slippery’s Academy for Girls – The Young Ladies of the Humiliation Club: Debauched Miracle Life 2.

This is just one of many adult features that appear in Shinichi Fukuda’s My Dress-Up Darling. While nothing is ever fully exposed, at least in this first volume, there is a fair amount of fan-service that appears. As soon as you open the book, you see a colour picture of Marin dressed in lingerie. Very early on in the story we see Marin wearing her school uniform in a gyaru style, with her dress short enough to briefly expose her backside. Then you get to the scenes when Wakana has to measure Marin for the costume, which leads to him becoming incredibly embarrassed as he is forced to get up so close to her.

While the fan-service will put some readers off, one thing that may attract the attention of cosplayers is attention to detail regarding the subject. One scene sees Wakana and Marin buying the materials for Marin’s outfit, leading to a shopping trip in Ikebukuro. Among the places they go to is a wig shop called Swallowtail, which is a real-life business. In the manga you see a sign advertising the shop with a web-link that takes you to the shop’s actual website.

One area of interest to me is that this is the first time I have reviewed a title published by the English language Square Enix Manga label, so it was interesting to see how they do things. While the Taylor Engel translation appears fine, I am somewhat bothered by the lettering by Ken Kumura. There appear to be too many different fonts being used, and some of them, such as the one used when Maria speaks in a cute way, can be difficult to read sometimes.

If you can get past the fan-service and pile of fonts, you can see the relationship between Wakana and Marin is one that will probably expand and develop as the story continues.

Read a free preview of the manga at the publisher’s website here. 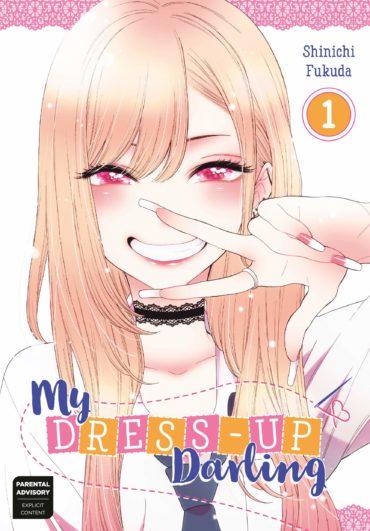