People often change as they get older, and that’s what seems to be the case regarding the leads in this lesbian romcom manga.

Catch These Hands! begins with a woman named Ayako Takebe. In her youth, she was a delinquent nicknamed “The Black Shadow of Tenjinyama”, who could beat up just about any other girl in the area. There was one exception: Kirara Soramori, “The Bloody Cardigan”, their matches usually ending in draws.

Having grown up, Takebe is sick of the fact that all her old friends have now got married, have jobs and are having kids. She decides it is time to put her delinquent past behind her, and she goes shopping for some new clothes. In one shop, she spots a sales assistant with a name badge reading: “Kirara Soramori”. Soramori is actually a very nervous woman, but because of her unusual name Takebe realizes this must be the same girl she knew, and challenges her to a fight in the local park.

Soramori turns up, but agrees to the fight on condition that if she wins, Takebe has to go on a date with her. It turns out that Soramori never wanted to be a delinquent herself, but she just got into fights that she always won. Whenever she wanted to ask Takebe on a date when they were younger, it just resulted in more fights. Similarly, today is a draw, with Takebe admitting that the fights were only draws because Soramori was going easy on her. However, because of this admission, Takebe finds herself agreeing to the date, promising she will never fall in love with Soramori. The manga then follows nervy Soramori’s attempts to win Takebe over, and Takebe’s attempts to become more respectable.

The characters in Catch These Hands! are the main strength of the series, especially the differences in how the two leads have grown up. Soramori has put much of her past behind her already, having a decent job, and at least being mature enough to confess her romantic feelings; Takebe still has her delinquent vibe, which, despite wanting to get rid of it, she can’t ever fully escape. She wants to conform to the standard female stereotype: get married, have kids etc., but it seems unlikely she ever will, and given how Soramori feels about her, the reader would rather see Takebe settle down with her instead.

In this opening volume, the comedy is stronger than the romance. There is plenty of slapstick violence in the fight scenes, especially in the flashbacks of Takebe and Soramori’s delinquent days, as well as the social misunderstandings of both characters, whether it is Takebe not being able to get out of her delinquent mindset, or Soramori lying to her co-workers about her private life. The romantic side of things is only just starting, but don’t expect anything too raunchy. This manga has a 13+ Teen rating, and feels more shojo-ai than yuri.

But other than that, not much stands out so far in this first volume. The comedy, the art, Amanda Haley’s translation, all of it feels OK, but not that gripping. Nothing is really enticing enough to make me think I should read the second volume other than the possibility of it improving. The plot is interesting, but everything feels that it could do better.

Things in Catch These Hands! may well get better in the second volume, but I’m unsure if it will. 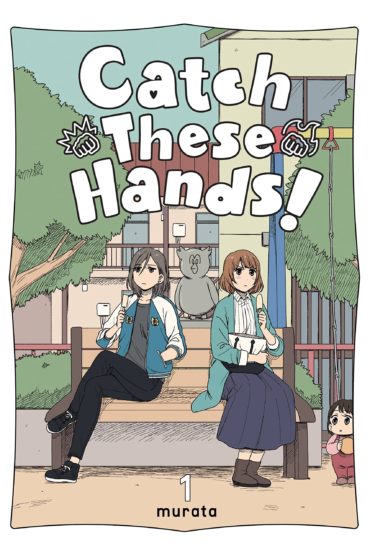