The Pokémon Company International describe the film’s story, as follows:

“Pokémon the Movie: Secrets of the Jungle” tells the story of Koko, a young boy raised by Pokémon, and the creation of a new bond between humans and Pokémon. ​Deep in the jungle, far from any human settlement, is the Forest of Okoya—a Pokémon paradise forbidden to outsiders and protected by a strict code of rules.​ In this jungle lives Koko, a human boy who has been raised as a Pokémon by the Mythical Pokémon Zarude. Koko has grown up never doubting that he is a Pokémon. But one day, a chance meeting with Ash and Pikachu leaves Koko with his first human friend. Is he truly a Pokémon? Or is he, in fact, a human? When danger threatens the Forest of Okoya, the bonds between Pokémon and human—as well as the love between parent and child—will be put to the test.

The film is directed by Tetsuo Yajima (Pokémon the Movie: The Power of Us at OLM (Guyver: The Bioboosted Armor, Pokémon the Series), with a screenplay co-written by himself and Atsuhiro Tomioka (BEM, Digimon Adventure:). The film’s music is by Taiiku Okazaki, who performed The Great Passage opening theme “Shiokaze”.

A release format for the film has yet to be confirmed at this time. Earlier this year, The Pokémon Company International partnered with Netflix to release Pokémon the Movie: Mewtwo Strikes Back EVOLUTION, a CG remake of the first ever movie, outside of Japan. 2018’s Pokémon the Movie: The Power of Us, however, was released theatrically in the United Kingdom and other territories.

For collectors of the Pokémon Trading Card Game, the new Mythical Pokémon Zarude makes his debut in the Vivid Voltage set – released today. Players of the Pokémon Sword and Shield video games in the UK can receive a download code for the normally unavailable Pokémon from GAME stores from 13th November to 13th December (where stores are open, with leading fansite Serebii reporting that online availability is coming soon). Fans in Ireland can receive a Zarude download code by signing up to GameStop. 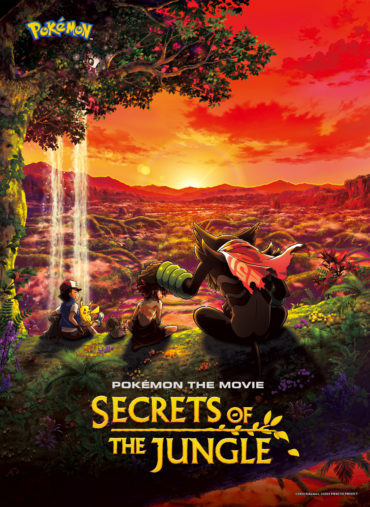 Pokémon the Movie: Secrets of the Jungle Premieres on Netflix Next Month

Netflix and The Pokémon Company International confirm an October release for the long-delayed anime film Pokémon the Movie: Secrets of the Jungle!

Hayao Miyazaki, Naruto and Doraemon among list of most famous Japanese people

A study by the Japan Press Research Institute to find the most recognised Japanese people alive and dead has revealed some surprising results.