Author Sugaru Miaki wrote the Three Days of Happiness novel back in 2013 and then it received a 3-volume manga adaptation between 2016-2017, which led to people becoming aware of this supernatural tale. Now, seven years after its publication in Japan, Yen Press have brought the novel to the West, where it will hopefully find a whole new audience to enjoy it.

The story follows 19-year-old Kusonoki who is in college and broke. After being given time off at work after collapsing from not eating in days, Kusonoki resolves to sell off some of his books and CDs to try and make ends meet. While selling his books to the owner of a used bookshop, our protagonist learns of a place where he can sell his remaining years for cash.

With no real motivations or dreams for the future, Kusonoki decides that selling some of his remaining time on Earth doesn’t sound so bad and heads to the shop. There he meets a woman called Miyagi, who informs him his life is only worth ¥300,000 (roughly £2,152.68 at the time of writing). The worth of your life is based on how impactful you are, both on the world and on those you meet and spend time with. This evaluation also reveals that Kusonoki only has another thirty years and three months left until he dies.

Having been left with this appraisal, Kusonoki decides to sell off his thirty years, leaving only three months of his life left to enjoy the money he’s given. The day after he returns to his apartment, Kusonoki is shocked to find Miyagi at his door as she informs him that she’s now his ‘monitor’, making sure he doesn’t do anything stupid (like committing a crime or suicide) before his time runs out.

Kusonoki is stuck with Miyagi night and day and he’s told he can’t even go more than a few feet away from her or he risks instant death. At first, Kusonoki tries to ignore her existence (as Miyagi tells him to), but eventually, the two begin to become friends as Kusonoki spends his days trying to tie up any loose ends before his passing.

What follows is a tale of regrets and figuring out what happiness means. One major regret of Kusonoki’s is losing touch with his childhood friend, Himeno, who was his only friend early on in his life. The two promised to be together should they still be on their own as adults, but Kusonoki doesn’t even know if she remembers this exchange. Before he passes on, he wants to find her and see how she’s doing now.

Three Days of Happiness is an interesting drama with a supernatural spin. There is a lot of depth here and keeping a small collection of characters gives it the time to flesh out Kusonoki and Miyagi to the fullest. Initially, I wondered if experiencing Kusonoki’s days would be boring, but actually, this book proved gripping.

There is something to be said for how powerful a story is when there is a firm ending in sight. Knowing Kusonoki only has three months left and watching how he chooses to use that time is not only intriguing but also leaves the reader wondering if his choices are the right ones. That draw keeps you turning the pages to find out how everything comes to its end.

One thing I especially appreciated about Three Days of Happiness is that Kusonoki isn’t written in such a way as to gain sympathy from the reader. He’s had options to improve his life before getting to this point and we clearly aren’t meant to feel sorry for him. I’m not sure we’re even supposed to like him. He’s balanced out well by Miyagi, who has a tale that does deserve sympathy and is far more likeable as a person. In many ways, she’s the perfect monitor for our protagonist, given their personalities and outlooks on life.

As a single novel, this is a rewarding read. Although it’s one of author Sugaru Miaki’s first works, it reads well and I’d certainly like to see the stories Miaki wrote after this localised in the future. The only real criticism I could give it is that the supernatural element of selling your life isn’t explored quite as much as it could be, but that’s a fairly minor issue.

I’m also not sure how I feel about the ending as I find myself left with questions that will never be answered. Again not a huge problem but I can’t help wondering what would have happened if Kusonoki did a few things differently. Some of these are certainly things the author could have explored and didn’t.

As previously mentioned, Three Days of Happiness has been brought to the West thanks to Yen Press and has been translated by Stephen Paul. The translation reads well with no issues to note, although I confess it would have been nice to have a single translation note about how much ¥300,000 was in at least dollars to prevent a mid-read Google. This release comes in the form of a hardcover book with a single colour page.

Overall, Three Days of Happiness is an interesting read with plenty of depth. While I’m left conflicted about the ending, I think the quality of the story makes up for any reservations I may have. If you’re looking for something different and on the shorter side then this is well worth checking out! 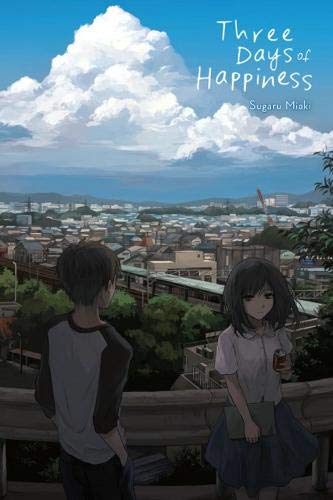