Readers may already be familiar with the name Josee, The Tiger and the Fish thanks to the film by Studio BONES which was given a theatrical release last year and is now available on home video. What you might not know is that the work is based on a short story written by Seiko Tanabe in 1984 and was then included in this short story collection also titled Josee, The Tiger and the Fish.

This book includes nine short stories, which focus on nine different women and their relationships. Some are married, others divorced and others yet still single and waiting for that perfect partner to come along. The opening story is titled I Can’t Drink This Hot Tea and follows scriptwriter Aguri, who is meeting with an old flame who called her out of the blue. Initially, she’s excited about the meeting, but it quickly becomes clear that her visitor may not have the best of intentions for calling her up and may just be wanting to ask for some financial help. This leads to a bittersweet conclusion for the story, something the majority of these short stories have in common.

The second story I Always Had a Feeling follows Kozue, who is preparing herself to meet her younger sister’s husband-to-be. Despite being the older sibling, Kozue is yet to get married or even have a relationship and she’s jealous of her sister for getting ahead. Kozue has always lived with her head in the clouds, imagining her perfect life. Since the announcement of her sister getting married, Kozue can’t help but imagine the kind of man she’ll bring home and what it would be like if Kozue was dating him instead. But of course, this will never be anything more than a dream. On the whole, this one is a little lighter than the opening act and I think that between the two, readers get a good idea of what tone Tanabe is aiming for with the collection.

One of my favourite stories is the fifth, titled Taken Prisoner, which is about Minoru and Rie who are a divorced couple spending their last day together. Rie is relieved that the whole process is over, but Minoru is reluctant to leave her and tries to put it off as long as he can by making idle chitchat. The two reminisce about their relationship, the good and the bad, and Rie even wonders what would happen if she took him back. I like this one since there is such a clearly defined history between the characters and while some of the other tales don’t dive deep enough into the relationships before ending, this one balances it just right.

Of course, I couldn’t talk about this collection without taking a moment to put the spotlight on Josee, The Tiger and the Fish. Compared to the film, this story opens with a much older Josee, who is married to Tsuneo and enjoying her honeymoon. It does briefly explain how the two met (as we see expanded on in the film), but for the most part, this is about their relationship and how, despite her disabilities, Josee lives a happy life with her husband.

Having been written in the 1980s, perhaps it comes as no surprise that this story doesn’t hold the same level of sensitivity and sensibilities toward talking about disabilities as more modern works do. Tsuneo, sadly, makes quite a few remarks about Josee looking “doll-like” and while that would be easy to ignore once, it’s said quite a few times within the 22 pages and always seems to be in situations where Josee is struggling to get around or particularly in need of Tsuneo’s support. I think this is a shame because it undermines the fact that this is one of the few living situations in the book where the couple is actively happy.

While on the subject of things that may rub readers the wrong way, it’s worth mentioning that one of the couples in this book is a woman and her teenage half-nephew. Even though the protagonist Une knows her attraction to him is wrong, she avoids putting a stop to his feelings and instead continues to welcome his advances until after they’ve slept together on a weekend away. This one leaves me with mixed feelings, but in the end, I came away oddly appreciating it, since it does contribute to the overall goal of showing all kinds of love and relationships.

I think that’s where the strength of Tanabe’s writing shines through. Although these stories don’t always have enough time to get you hooked (given they’re all only 20-30 pages long), the ones that do resonate with the reader will be something you’re left thinking about for a while after putting the book down. Given that the stories feature women from all walks of life, there is going to be someone everyone can relate to. Every reader is likely to have a different experience and grow attached to different characters.

In some ways, I think Yen Press has done a disservice to this book by both marketing it as if it was an adaptation of the Josee, The Tiger and the Fish film and calling it a light novel when it certainly isn’t. Seiko Tanabe is an acclaimed Japanese author and I think you would have had selling power on that fact alone. The other problem is that Josee as a film was far more family-friendly than this collection which is focused on mature topics and has quite a few sexual references. They’re very different things and I just hope no one accidentally bought this thinking it would be a novel adaptation of the film!

As mentioned above Josee, The Tiger and the Fish comes to the West thanks to Yen Press and has been translated by Mutt Rutsohn. The translation reads well, although it could have done with another couple of proofreads since there are a couple of instances of missing words in sentences. Not a huge issue, but given that Yen Press has put this out as an expensive hardcover edition, you would expect it to be problem-free.

Overall Josee, The Tiger and the Fish is an interesting short story collection focusing on what it means to be a woman in love. It’s such a varied selection that there will be something for everyone to connect with, making it well-deserving of a place in your collection. 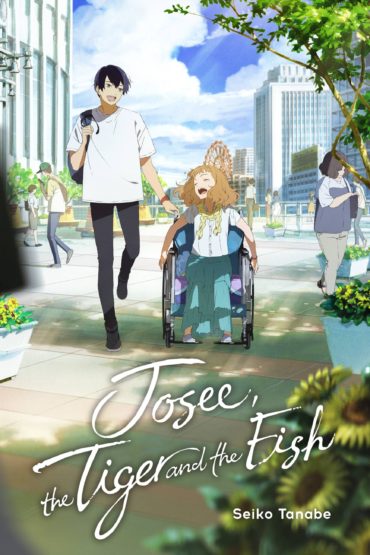 Title
Josee, The Tiger and the Fish