At the end of Volume 2 of the Rascal Does Not Dream of series protagonist Sakuta was reunited with an old friend of his and first love, Shouko Makinohara. However, when Sakuta last saw Shouko, she was in high school and now she’s a young girl in junior high who has no memories of him…?

No stranger to the weird and wonderful by now, Sakuta chalks the issue up as another case of Adolescence Syndrome. However, before he can get to the bottom of what’s happening, he gets wrapped up in another problem involving friend Rio Futaba who finds herself with a doppelganger!

Rio has been Sakuta’s friend since he entered high school and she’s a member of the science club, as well as having a crush on Sakuta’s other friend, Kunimi. She’s the smartest person Sakuta knows and the one he’s turned to when needing help with the previous cases of Adolescence Syndrome he’s found himself involved with.

Now that there are two Rios, one has found themselves kicked out of their home and once Sakuta finds her trying to stay at an internet café, he invites her to stay with him and his sister, Kaede. Since the group are currently on summer vacation, this gives our protagonist ample opportunity to investigate and find out what’s caused Rio’s doppelganger to appear.

Both Rio theorizes that a substantial shift in their emotional state has caused the split, with both halves being at odds with one another. While Sakuta suspects this has something to do with Rio’s feelings for Kunimi, this proves to not be entirely the case as the book goes on.

While every story in Rascal Does Not Dream of has been fantastical, they’re always very grounded when it comes to the emotions causing Adolescence Syndrome. The same can be said here where, if you take the doppelganger out of the equation, you’re left with a teenage girl struggling to come to terms with her feelings. Someone who has to wrestle with her anxiety, loneliness and desire for attention, which I’m sure will be relatable for many. Since the two Rios never meet, worrying that doing so would cause a paradox that might kill one or both of them, it’s easy for us readers to understand Rio’s problems away from the more supernatural element of it.

I also appreciate that while Sakuta does everything he can to be there for Rio, he doesn’t fix everything for her. Adolescence Syndrome can only be resolved if the person wants it to be and makes an adequate change to their lifestyle. So, in this case, Rio has to accept the truth she and Sakuta find and come to terms with it.

The one complaint I have about this book is that it feels like its focus is divided between Shouko and Rio. Ultimately whatever is going on with Shouko is a story the series has no intention of fully exploring right now (and goes on to ignore it for a bit yet, judging by the anime), so I feel it took away from Rio’s tale somewhat. It’s certainly not a big issue and I wasn’t left dissatisfied, but I worry that if the pay-off later isn’t good enough, then it may leave me with a sour taste toward the storyline.

If nothing else, this book proved a welcome opportunity to get to know Rio better, especially since she’s become such an important character in the series. Now we can go into the next tale with a better understanding of what drives Sakuta’s closest friend and how she advises him on his troubles.

Overall, Rascal Does Not Dream of Logical Witch proves another great entry in the series. While I worry about splitting the focus between two different character stories in places, that certainly doesn’t take away from it. Existing fans of Rio’s will enjoy getting to know her better in this thoughtful tale. 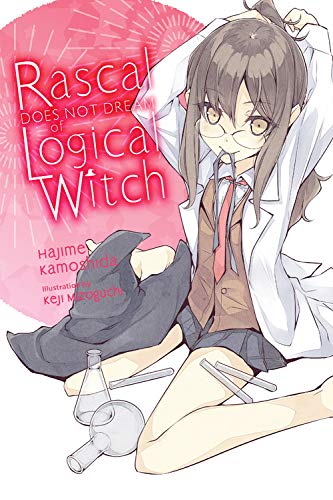 Title
Rascal Does Not Dream of Logical Witch