At the end of Rascal Does Not Dream of a Dreaming Girl, Sakuta was prepared to be killed in a car accident as foretold by a version of Shouko from the future. This would mean his heart is donated to Shouko in the present who will die without it. But at the last moment, Sakuta is pushed out of harm’s way by his girlfriend, Mai, who is killed in his place.

Unsurprisingly, Sakuta is wrecked by the death of Mai, the one person he has been able to depend on, no matter what was happening around him. How is he supposed to go on living without her, living with the guilt that loving him is why she died, something that her little sister Nodoka and her mother blame him for? And if that isn’t bad enough, the press are also hounding Sakuta, hoping to learn more about the accident that killed a rising star like Mai.

To escape the media, Sakuta ends up staying with his best friend Rio Futaba where time passes, no matter how much he wants it all to end. Rio is understandably worried about our protagonist, but she recognises that no one can reach him in this state and does her best to simply be there to lean on, should Sakuta want to open up about some of the feelings he’s buried deep inside.

Eventually, Sakuta is reunited with the older version of Shouko who can’t bear to see Sakuta in this state. She lets him on a secret that would allow him to save Mai, but it means sacrificing Shouko’s future, given that neither Sakuta nor Mai would wind up dead this time to give her the heart transplant she needs. Sakuta has mixed feelings about this since he certainly wants Shouko to live, but at the very least he can’t bear to live in a world where Mai died because of him, so he sets out to save her.

I often praise author Hajime Kamoshida for his depiction of human emotions. It’s something I always loved about his other series The Pet Girl of Sakurasou, and enjoy here in the Rascal Does Not Dream of series as well. Kamoshida excels at showing raw feelings that the reader can relate to, or at least believe in. How Sakuta deals with his grief of losing Mai, as well as the feelings around him are very true to how we as individuals come to terms with something like this happening to us. It makes for a powerful read that leaves us feeling just as crushed as Sakuta does.

What I am less thrilled with is that Kamoshida leans on the concept of time travel to resolve the central problem. While Rascal Does Not Dream of is no stranger to dabbling in the realm of sci-fi with its Adolescence Syndrome and how it affects the cast, up until now it always felt as if the characters solved their problems on their own by resolving whatever caused the strange Adolescence Syndrome they suffered. This time, there’s no real way for Sakuta to do that on his own merits; he has to use what Shouko teaches him if he wants to change anything.

Sakuta does still have to work hard to make sure everything comes together the way it should, which helps balance the fact he’s using supernatural power, but it still feels like we’ve wandered off the path of realism that the stories have otherwise had up until now. Maybe the emotional payoff of the conclusion will be enough to overcome that for most readers (it certainly stopped me from feeling as harshly about it as I could have), but I wouldn’t be surprised if other readers aren’t huge fans of this element.

Overall, Rascal Does Not Dream of His First Love brings one of the most emotional arcs of the series so far to its conclusion. While not everyone will be a fan of the way the story is resolved, it’s hard not to appreciate the strength of Hajime Kamoshida’s writing as he shows Sakuta’s struggles with grief. Certainly, this book is a reminder that when it’s at its best, this series is incredibly powerful. 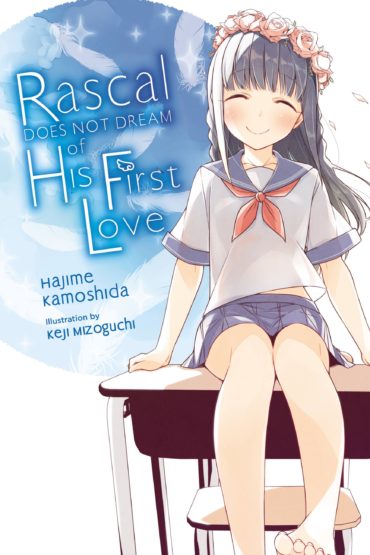 Title
Rascal Does Not Dream of His First Love