When it comes to stories about magic academies, I’m sure the title that springs to mind for most of us is the Harry Potter series by J. K. Rowling. But what if a Japanese author were to take a similar concept and turn it into a light novel series? Well, that’s where Reign of the Seven Spellblades comes in, which I’m here to check out today!

The story follows protagonist Oliver Horn, who is about to start his first year at Kimberly Magic Academy where he’ll be trained to become a full-fledged mage. On the day of the entrance ceremony, he meets Nanao Hibiya, a samurai girl from the distant nation of Yamatsu, who seemingly has no talent for magic but plenty of skill wielding a sword!

During the ceremony, a troll gets loose and goes on a rampage, which leads to Oliver and Nanao teaming up to take it down before anyone gets hurt. Afterwards, the two start to build a firm friendship alongside many of the other first years, but little do they know that life at Kimberly is far more dangerous than it first appears. More than 20% of the first years usually don’t survive to see their second year. If they want to become mages, they’ll have to keep their wits about them!

As we spend more time with Oliver, Nanao and their friends Guy, Katie, Michela and Pete, we get to see all the various backgrounds they come from and their experiences with magic. Katie, for example,  comes from a family that wants better rights for intelligent monsters (such as trolls), which is something that’s looked down on by other mages.

At a first glance, Oliver seems like your perfectly average main character. He’s intelligent, brave and the one who ultimately becomes the leader of the group. However, as the book goes on, it becomes clear that there is something hidden in Oliver’s past which will completely change our perception of him and it’s satisfying to watch this unravel.

In a lot of ways, Oliver is balanced out by Nanao who has a more eccentric personality. She’s powerful, with little regard for her own life because of coming from a nation at war, but as she becomes friends with the others, she finds things to live for. I find the idea of a samurai from the boonies with no real common sense a little generic, but I’m willing to overlook it, since Nanao is otherwise a good character.

At the beginning of this review, I compared the series to Harry Potter and that’s something born from both the characters and the world they find themselves in. Kimberly Magic Academy isn’t all that dissimilar to Hogwarts, complete with grumpy alchemy teacher Darius Grenville (who will remind readers of Severus Snape). There are enough differences between the two where Reign of the Seven Spellblades manages not to feel like a copy of Harry Potter, though.

A notable difference is the fact that the student’s wands double as a kind of sword that can be used in battle. Also, while this is a world where some can’t wield magic at all, it doesn’t appear to be a case where those without magic are unaware of those who do. Ultimately, they’re similar enough that fans of Harry Potter will have a great time reading this, but the series stands firmly as its own thing too.

The author behind the series is Bokuto Uno, who also wrote Alderamin on the Sky. I feel they deserve praise for managing to juggle so many characters and so much world-building in one volume. There is a good split between more serious moments and light-hearted scenes and it’s easy to imagine where the characters are, from page to page. There’s a lot to keep track of, but this never feels like a chore. Uno is clearly experienced at handling a busy story like this one and leaves me eager to find out what else is in store going forward.

As previously mentioned, Reign of the Seven Spellblades Volume 1 comes to the West thanks to Yen Press and has been translated by Alex Keller-Nelson. The translation reads well with no issues to note. The series has been illustrated by Miyuki Ruria (The Greatest Magicmaster’s Retirement Plan) and this release includes colour pages, which shows off Ruria’s eye for action scenes as well as the more peaceful everyday scenes. I do wish there were a few more battle scenes depicted, instead of just showing off the various girls, but hopefully, that will improve in the future…

Reign of the Seven Spellblades is currently on-going in Japan at six volumes and Yen Press have Volume 2 scheduled for an English release in March.

Overall, Reign of the Seven Spellblades Volume 1 gives readers a world filled with magic that they can become invested in. With a wide range of characters to grow attached to and plenty of secrets to get to the bottom of, the series shows a lot of promise. I’m certainly looking forward to seeing how it develops in future instalments. 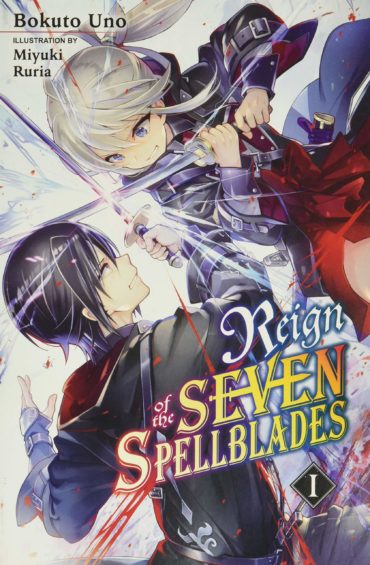 After taking a break in Volume 4 of Reign of the Seven Spellblades, now Oliver is preparing to take down a second target in his quest for revenge – but will he be able to overcome his target’s formidable combat abilities?