After three action-packed books, Volume 4 of Reign of the Seven Spellblades took a step back to give both the cast and us readers a chance to collect ourselves and enjoy a story that was on the lighter side of things. Now Volume 5 is here and it wastes no time in diving into a dark new storyline…

This book puts the whole ‘learning magic at a Kimberly Magic Academy’ on the backseat as we return to one of the plot points from Volume 1: Oliver wanting to take revenge on those responsible for his mother’s death. This time around, our protagonist has his sights set on Professor Enrico Forggieri, who’s got a reputation for being a mad scientist. This is something Oliver gets to see for himself when he whisks Pete off to his laboratory after class one day.

Enrico is a powerful mage who puts his love of science into his spellcraft, creating “golems” to fight for him in various ways. This makes him one of the more powerful enemies on Oliver’s roadmap to revenge, but equally why it’s worth taking him out now while his targets aren’t too concerned about being targeted by the mysterious murderer (whom we readers know to be Oliver) who took out a teacher at the start of the series. It’ll be difficult, given that Enrico fights in a manner completely unlike anything our protagonist has faced so far, but that’s what makes it all the more interesting for us readers.

So, the majority of this volume is focused on Oliver preparing for and then embarking on his pursuit of Enrico, but that doesn’t mean that’s all that happens this time around. We also get to see our protagonist and his friends try to tame griffins in their Magical Biology class, which is not a simple task! They also learn about Gnostics (powerful monsters not from this planet basically) and Gnostic Hunters, those tasked with hunting them. It turns out that Oliver has a connection to a famous Gnostic Hunter which also feeds back into the storyline being told in this book. Finally, we understand Oliver’s motivation, which is the one thing we’ve been missing.

Honestly speaking I am happy that author Bokuto Uno has returned to this storyline since it was one of the things I found most interesting about Volume 1 of Reign of the Seven Spellblades. Oliver presents himself as a fairly average nice guy to his friends and classmates, but there is a darkness hidden underneath that we only see when he’s thinking about those he needs to kill. The more time Oliver spends with his friends, the more difficult it’s becoming for him to keep the hardened mindset of a killer and, eventually, this will all come to a head when his friends find out the truth. I’m sure Oliver and Nanao will come to blows, given her stance on justice and her single-minded personality, which I can’t wait to see, even if that’s probably not until close to the end of the series.

That confrontation is more or less why I keep reading the series. Sure, I enjoy the Magic Academy aspect and how well-written the books are, but when push comes to shove, what I really want to see is more of this side of the story where Oliver is off being a ‘villain’. So I’m glad the author came back to it, even if it has taken several books. I imagine Volume 6 will go back to following the cast’s everyday school life, which is by no means a bad thing after the events of this one.

Reign of the Seven Spellblades Volume 5 comes to the West thanks to Yen Press and continues to be translated by Andrew Cunningham. The translation reads well with no issues to note. Volume 6 of the series is scheduled for an English release on the 6th of September, so not too long to go.

Overall, Reign of the Seven Spellblades Volume 5 proves one of the more interesting entries in the series as it returns to a storyline I’ve been eager to see more of since the first book. Not only does it offer a fantastic fight, but it sets up well for the future of the series, as questions we’ve had since the start are finally being answered. 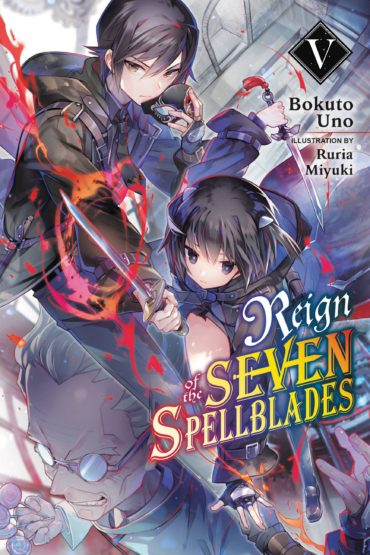