With many of last year’s blockbuster films delayed last year as countries locked down and implemented restrictions to try and restrict the spread of the coronavirus pandemic, one success story amid all of the uncertainty rocking the film industry in particular, was the unexpected and unprecedented success of Demon Slayer: Kimetsu no Yaiba the Movie: Mugen Train, which made history as the first anime and non-Hollywood produced movie to be named the highest grossing film of its release year. As film fanatics across the world have started to return to the cinema experience, all eyes have been on whether this runaway train will continue to pick up speed overseas or if audiences in other markets will apply the brakes.

Funimation UK recently announced that the film’s UK and Ireland box office has exceeded £1 million (With Deadline putting the figure at $1.9m – approx. £1.35m – noting it to be the UK’s biggest anime film in twenty years!). That may not sound like a lot for those used to tracking earnings of Hollywood blockbusters, or even the film’s $44.9m U.S. gross, but hitting seven figures is an extraordinary feat for an anime film in a smaller market like the United Kingdom. Clearly the (Mugen) hype train is showing no signs of slowing down, but let’s look back on how the tracks were laid for it to reach here in the first place.

Demon Slayer was always likely to succeed on its own merit, but the unexpected scale of its success was undoubtedly affected by the coronavirus pandemic and its impact on the global film industry. While western countries were hit especially hard by earlier waves of the pandemic, Japan and other Asia-Pacific nations were able to re-open earlier with domestic films not having the competition from heavyweights like the Hollywood produced superhero and franchise blockbusters that tend to dominate the worldwide highest earning lists (indeed, a glance at the list of 2020’s highest grossing movies shows that the top 3, and over half of the top 10, were produced and released in Asia). With so many impressive achievements under its belt, it’s no surprise that the film became a talking point for hungry cinemagoers. When its runaway box office train started, the world’s media and film industry took note, which would inevitably lead to more eyes being cast on its inevitable UK release.

However, Demon Slayer: Mugen Train wouldn’t have exploded in Japan if the brand wasn’t already on the rise. The 2019 anime series by ufotable of Fate/stay night fame was a worldwide smash-hit, and reactions to an especially slick sequence in its nineteenth episode made the series trend worldwide, where it earned enthusiastic praise from even world-famous streamers like Ninja, who recommended it to his 16.7 million followers.

Demon slayer is going to become the greatest Anime of all time change my mind. https://t.co/lvn9KBjEYq pic.twitter.com/RMoSAdcmVF

The popularity of Demon Slayer saw Koyoharu Gotouge’s original manga series become Japan’s highest selling in 2019 when it wasn’t even the Top 10 the year before. Now, the manga is estimated to be the tenth highest selling manga of all time with over 150 million copies in circulation. The franchise has also become such a magnet for merchandising that “Kimetsu Poverty” was even coined as a phrase (that I also use to describe my bank balance – sorry, but I needed that Shinobu themed ruler). Clearly, Demon Slayer: Mugen Train was primed to be a huge success in its domestic Japan anyway, but no-one could have predicted these specific global circumstances that resulted in the film overtaking Spirited Away to become Japan’s highest grossing movie.

Seeing the recipe for its domestic success and the growing hunger for Demon Slayer, Funimation wasted no time in getting the film onto our big screens on 26th May 2021 – a little over a week after cinemas in the UK started to re-open. While cinemas were eager to show re-releases of classics and to finally give digitally released titles like Oscar winner Nomadland the big screen treatment they deserve, the highly anticipated new mainstream blockbusters are still waiting until later in the summer, like Fast & Furious 9 (24th June) and Black Widow (9th July). While Peter Rabbit 2: The Runaway was celebrated as an early post-lockdown cinema success story, an all-ages family film may not appeal to a key core demographic of cinemagoers: 13-35 year old film fans (regardless of how much it apparently improves on its predecessor). Anecdotal evidence from the Anime UK News community might even suggest that for many who favour the geekier side of the genre spectrum, Demon Slayer: Mugen Train is likely to be the first film they saw in a cinema post-lockdown. There’s plenty to be said about (and indeed plenty of studies into) cinema’s place as a social experience, and Funimation positioned themselves to serve this dish right when people were hungry for it. The film also had the buzz of being a must-see for existing Demon Slayer fans, as it follows in a recent tradition where franchise anime films are direct canon continuations of the series, rather than a non-canon side story typical of popular Shonen JUMP franchises like My Hero Academia.

Arguably, the only competition Demon Slayer: Mugen Train had on release as a nerdy, action-packed film was Godzilla vs Kong (which had previously released digitally the month before). According to the BFI’s weekend box office reports, the two went neck-and-neck with similar debuts and changes in similar weeks (although it should be noted that the accuracy of BFI’s reporting has been disputed by distributors in the past, so shouldn’t be relied on too heavily for analysis). The last time there was this much buzz about an anime film was in 2016 with the release of Your Name, which had to fight off the release of Warner Bros. Harry Potter spin-off Fantastic Beasts & Where to Find Them as well as the continuing run of Marvel Studio’s Doctor Strange. Your Name‘s release was a landmark moment that ushered in considerable interest in a new wave of theatrical anime releases, but with competition including two pop culture juggernauts, its very successful and respectful debut was unable to break into the top ten. Of course, any comparisons with Your Name should be taken with a pinch of salt given how drastically different the global, social, and industry situations were when each released.

It also probably helped that Demon Slayer: Mugen Train also turned out to be a good movie in its own right. It’s usually a challenge to get mainstream media attention on an anime release, especially one attached to an existing property. However, this film’s incredible success elsewhere naturally attracted the eyeballs of larger outlets. While this did result in some mixed reviews by people who struggled to understand an anime from a series they admitted to being unfamiliar with, Demon Slayer: Mugen Train earned the highly sought after praise of Mark Kermode, the country’s most prolific film critic, both on BBC News and his radio show. Kermode is no stranger to anime and was an early advocate for films like Your Name, but for him to feature a title on his regular BBC News film segment is always a massive boon to any smaller film release. Not to mention, it’s often rare for a mainstream outlet to praise an anime film that isn’t a totally standalone picture (remember when The Guardian called Dragon Ball Z: Resurrection ‘F’ a “baffling trading-card-universe-cartoon“?)

With few exceptions, theatrical anime releases tend to be limited one-day events, but Demon Slayer: Mugen Train is just finishing its third consecutive week at time of writing, with listings advertised throughout its fourth week – a monumental achievement that will hopefully indicate an interest in anime films to come, even as competition for cinema screens heat up when the blockbusters return. For Demon Slayer, however, the future for now is a return to television with a second anime season coming later this year. This incredible milestone for Demon Slayer: Mugen Train may not have been as loud if not for the unique circumstances of how the pandemic affected the film industry, but Aniplex and Toho in Japan, and later Funimation here, saw how they could line the dominoes up to capitalise on the slivers of silver lining hidden amidst all this uncertainty, to weave together a smash-hit anime release. 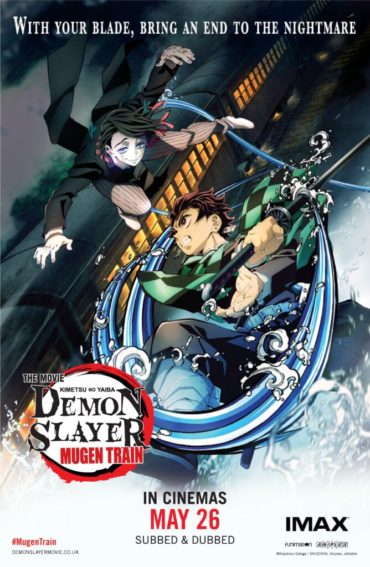