It’s certainly been a long wait for UK Love Live! fans, but The School Idol Movie is finally available in this collector’s edition from Anime Limited. Has it been worth the wait? Well, grab your glowsticks and take a seat, for I think the answer to that is a no-brainer.

The film kicks off exactly where the second season ended, as Hanayo hears the news that the third Love Live! competition is planned to be held at the Toky- ahem, Akiba Dome. While this is big news, it hasn’t been finalised yet, and in order to help make the deal, μ’s have been invited to go and perform in New York to help spread the word about the power of school idols and make them more popular. 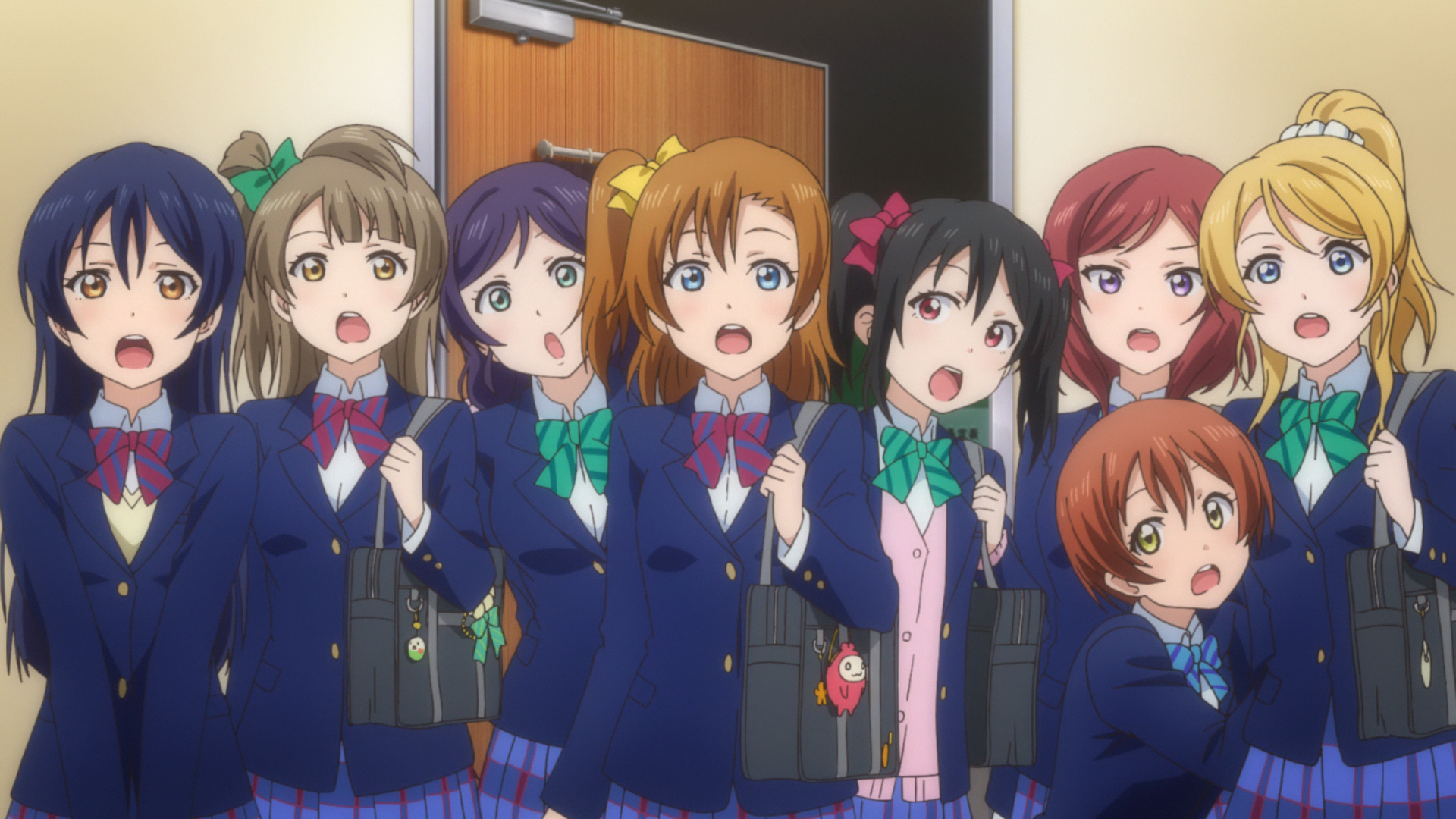 The film is largely split into three parts, and the girls’ trip to New York is arguably the most fun and engaging of them, as it follows a template that many may remember from the K-On movie, which was released a few years prior to this. Thrusting the girls into the middle of a massive foreign city is an absolute delight, as they end up running around looking for a place to hold their performance, getting to take in the sights of New York along the way. Just like the K-On movie did for London, this does the same for New York, showing off everything from glistening skyscrapers and the Statue of Liberty to Central Park and even the poorer side of town, in an amusing scene near the beginning where, having split into different taxis from the airport, Umi’s group gets taken to the wrong hotel. So, it’s not just plain sailing, as they also struggle with the language barrier, the lack of familiar food, and getting lost in an unfamiliar place, all of which I think everyone who has travelled abroad can relate to. 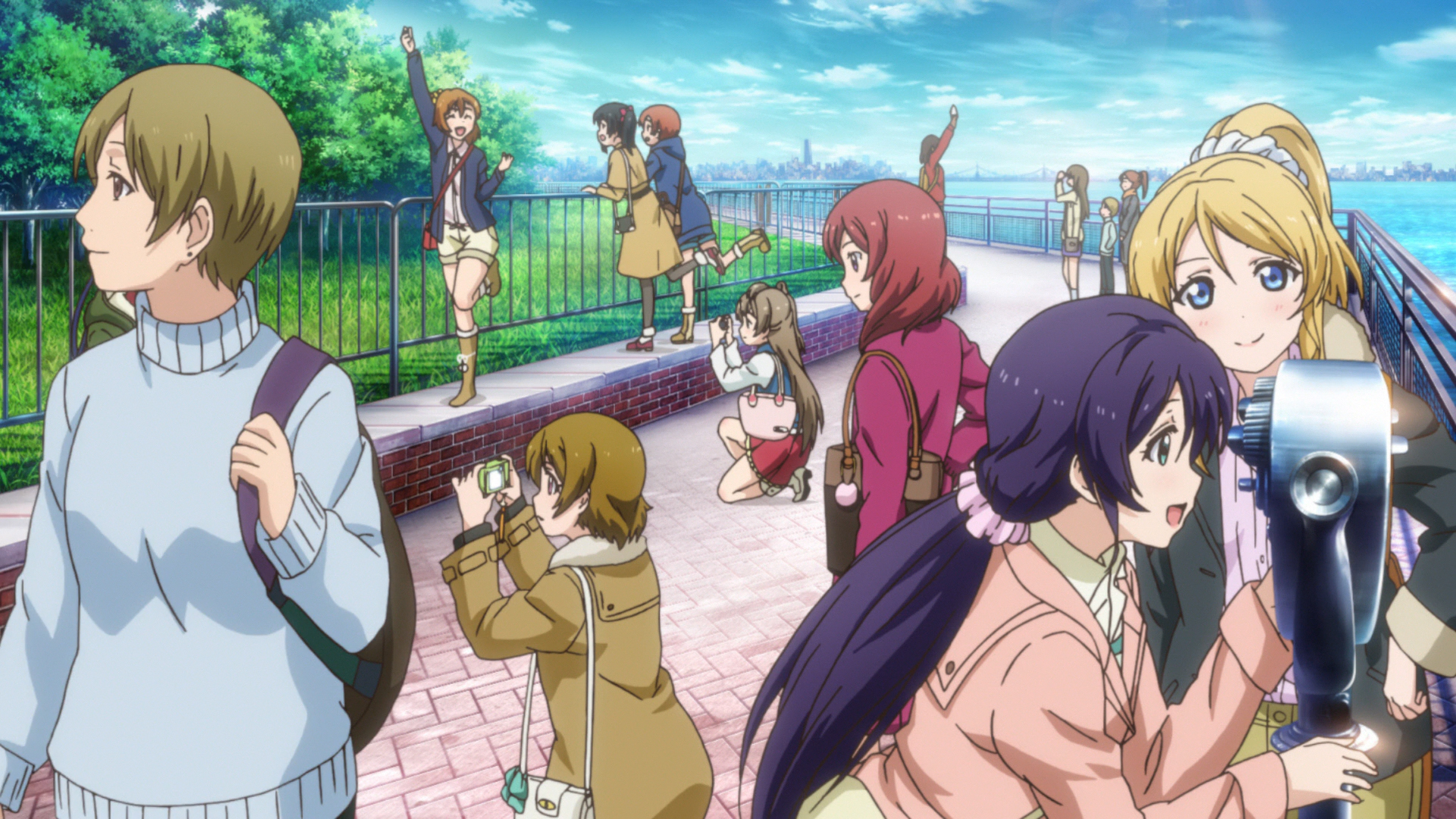 While there is very much a sense of fun and letting go, there’s also a tinge of sadness here too, as the girls are still coming to grips with their decision to split that they made in the second season. Despite that decision, it feels like they aren’t quite done yet, with Maki still writing music and Kotori still drawing out costume designs; but it’s Honoka who still seems the most conflicted, as she clearly wants to keep on singing, but with the group splitting up, she questions where she should go from here.

This ends up being the core focus of the second part of the film, and honestly feels like we are re-treading old ground, as the girls return to Japan after their successful performance in New York to new-found popularity, and face incredibly high expectations placed upon them by fans and rival groups alike that force them re-examine if they should call it a day or not. I think this could have been framed a little better to focus more on the “where do we go from here” question rather than “should we continue”, as we already know the answer to the latter anyway, and the way this part of the film is structured around Honoka, it makes more sense to drill down properly into what she wants to do for herself, rather than the rest of the group. 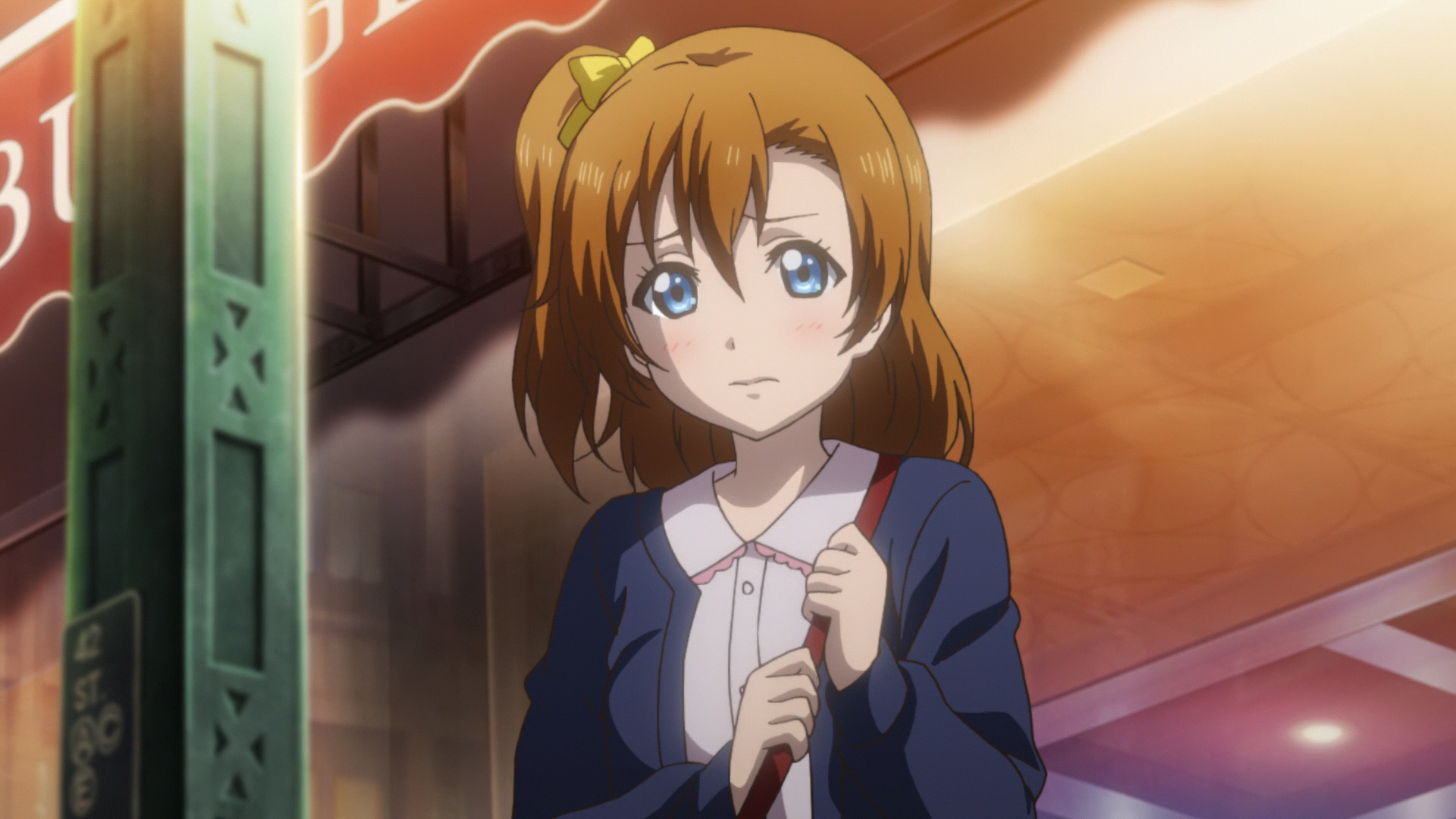 This is there in a way anyway, but I do have conflicting feelings about the way it is executed, particularly with the introduction of a familiar-looking face to offer her guidance and inspiration to things she could have probably realised herself. However, her meetings with this character do work well as “wow” moments in the film when you figure out who it might be and offers up a cute but slightly sentimental smile at those who are particularly invested in Honoka’s character.

For those of you who prefer the other characters in the group though, don’t worry about Honoka stealing the limelight as the rest of the gang get their own fair share of screen time and they all have some great moments throughout the film, whether that’s Rin taking the charge in New York, Nico blasting out her iconic “Nico Nico Ni!” catchphrase and dreaming about getting attacked by the alpacas, or Maki crafting the group’s final song. 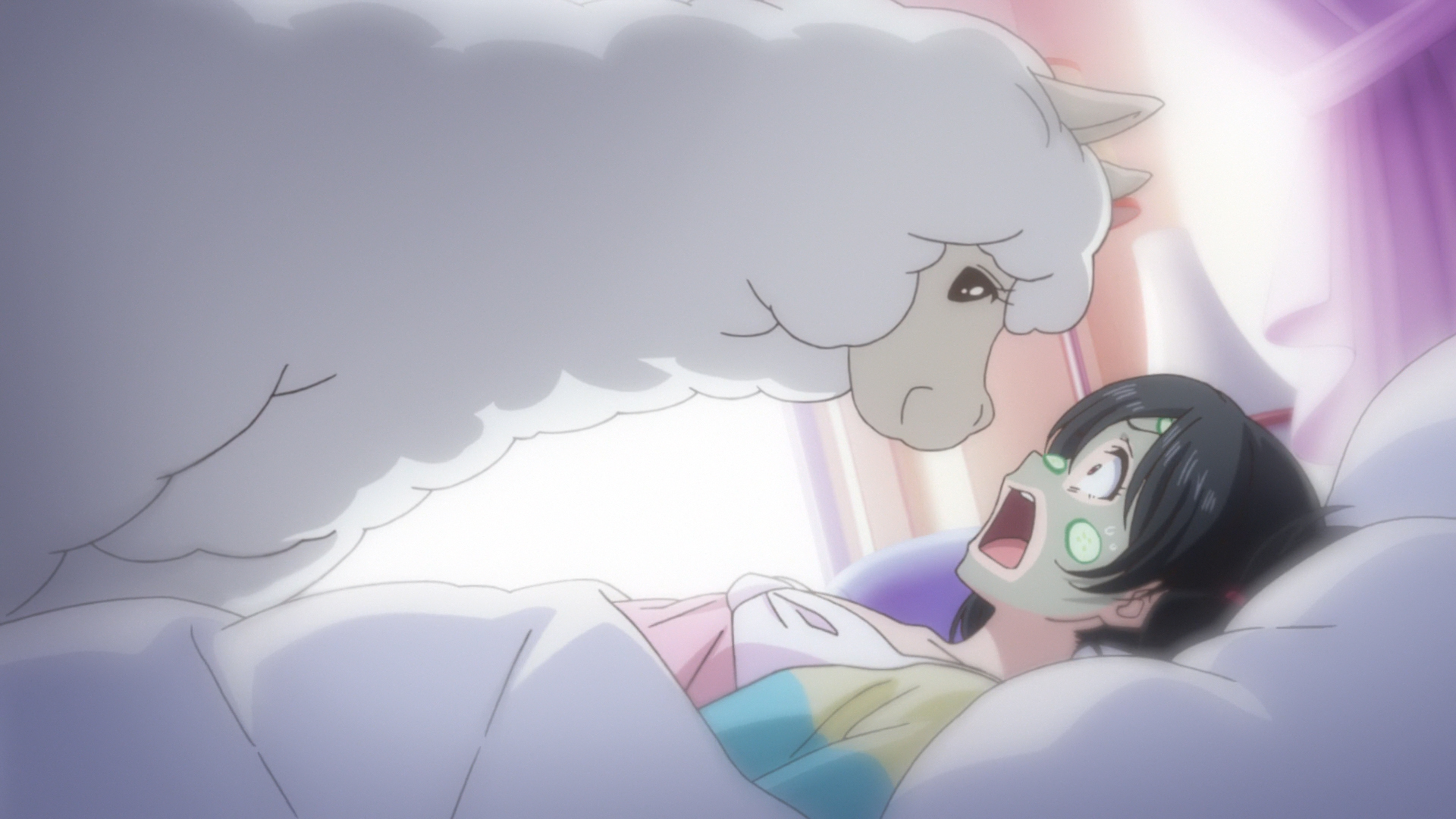 And speaking of songs, each member gets involved in that way too, with each year trio getting their own musical number throughout the story, as the film really takes on board the animated musical vibe that honestly fits in really well with the initial New York setting. While this approach isn’t necessarily new at this point as it was the way Love Live! was initially designed to be, it feels like it really connects this idea perfectly for the first time.

All in all, I love how we see the group really come together in this film and it shows how far they have come since Honoka forced Umi and Kotori onto the stage in the school auditorium. So going into the film’s final third there’s certainly a sentimental but overall joyous feeling, as they decide to put on one last big hurrah, taking over Akihabara and roping in school idol groups from all over the country to show everyone just how good school idols can be. And as the sun sets and we get into the film’s final scenes, it’s hard not to shed some tears as μ’s bows out to the next generation of school idols. 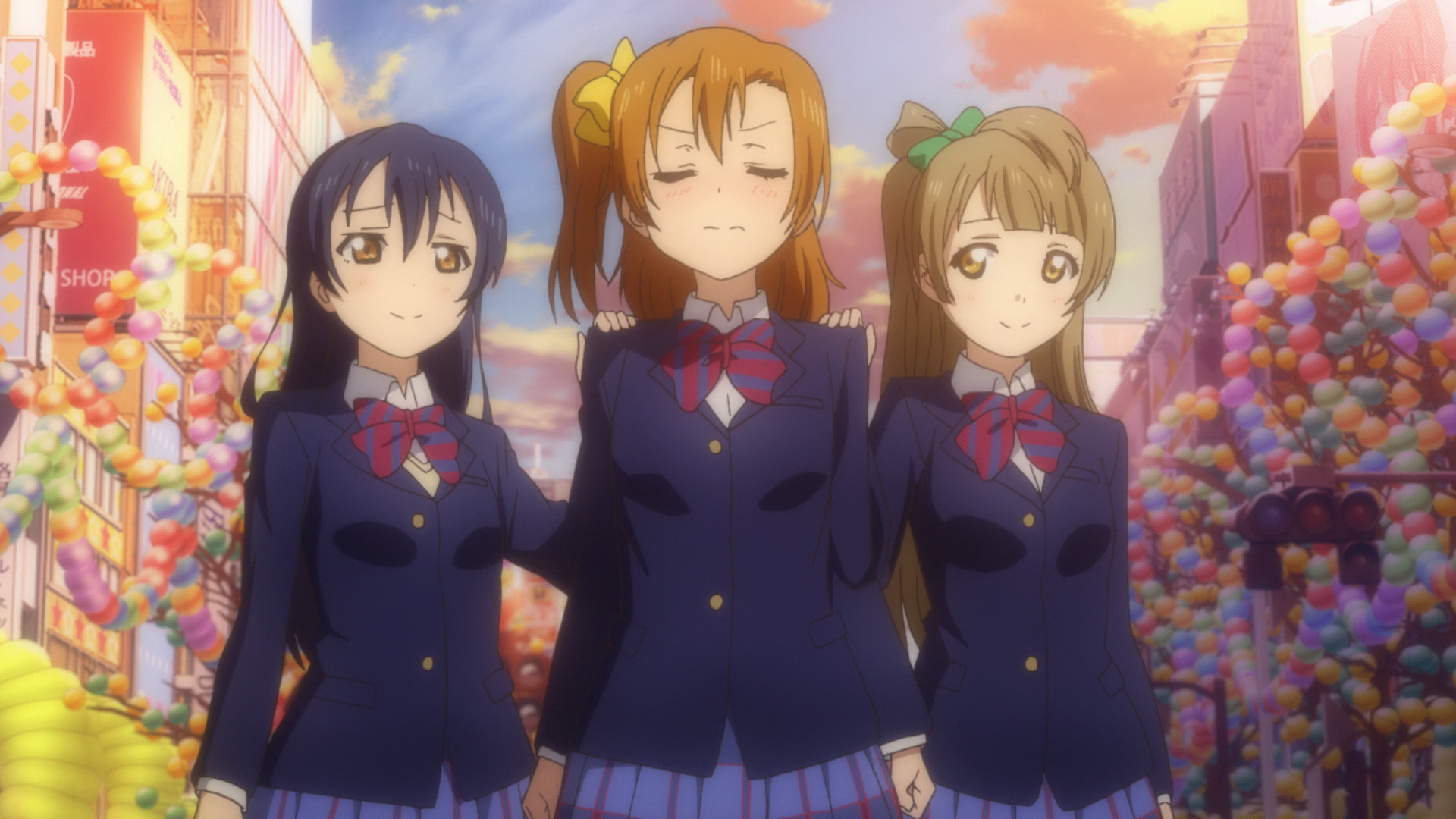 Animation for the film is handled by Sunrise, which looks consistently great throughout, with the movie-size budget helping to elevate it past the TV series with some fantastic and dynamic-looking shots, great character animation (the face game is absolutely on point here!) and some additional CGI oomph when it comes to the performances. While most of these are great in terms of their design and direction, I wasn’t quite so sure about the big New York live, which felt like it missed the mark a little, as it plonks a great big stage down in a nondescript part of the city and inexplicably flips to scenes in Central Park at times. When part of the point around the segment was them trying to choose where to host the performance, it just doesn’t make sense to be so indecisive in where it wants the audience to think it takes place.

The music itself though is fantastic, and while “SUNNY DAY SONG” is clearly the standout climax, the other tracks are really fun and upbeat idol pop numbers that makes you want to chant along. Meanwhile, the lyrics of “Bokutachi wa Hitotsu no Hikari” help drive that sentimental feeling at the end, using the literal meanings of each of the girls’ names to reflect on their growth through the series. The film’s score is composed by Yoshiaki Fujisawa and follows on from his work on the first two seasons, featuring many of the same cute and comedic themes that keep it consistent with the rest of the franchise. 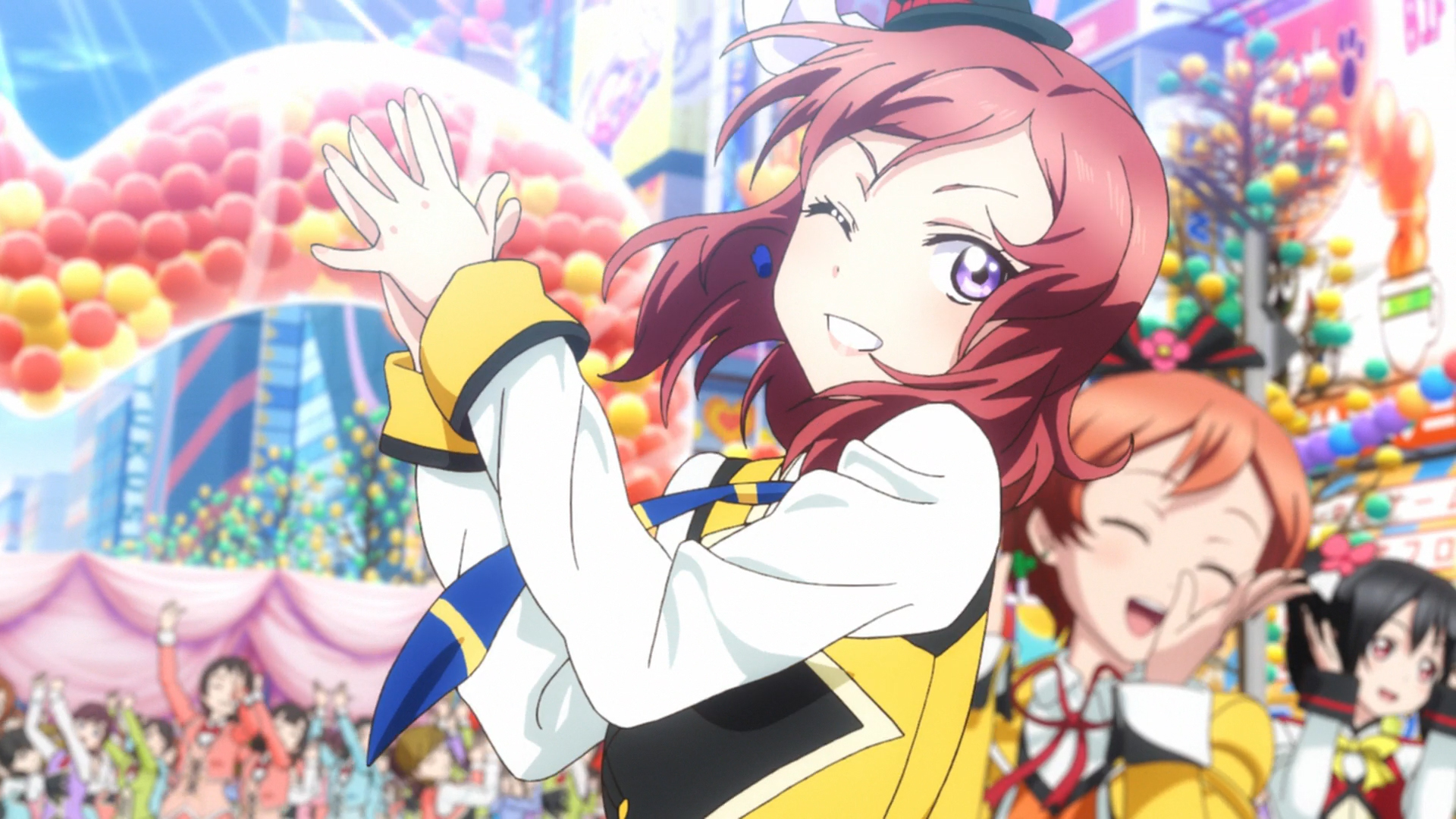 Anime Limited’s release features the film in both Japanese with English subtitles, and the English dub. The Japanese voice cast does a great job throughout with roles that are very familiar to them at this point, while the English dub is pretty good too, and even though it’s not an exact match for the tones of the characters’ voices, they’ve definitely tried their best and they blend well enough into the Japanese songs to keep things from being too jarring as they switch between the two.

On-disc extras include the Japanese promotional videos for the film, alongside clean ending credits. Physically you get the film packaged in a standard Blu-ray case inside the collector’s edition box, along with a booklet featuring character profiles and artwork. With Anime Limited now largely abandoning digipacks, this release feels a bit cheaper than their releases of Sunshine!!, although I know some people prefer the standard Amaray. I do wonder if they would consider a Criterion Collection-style case in future, as the full wraparound artwork included here (which is the main art used for the Japanese digipack) doesn’t really go with your standard Blu-ray branded case. 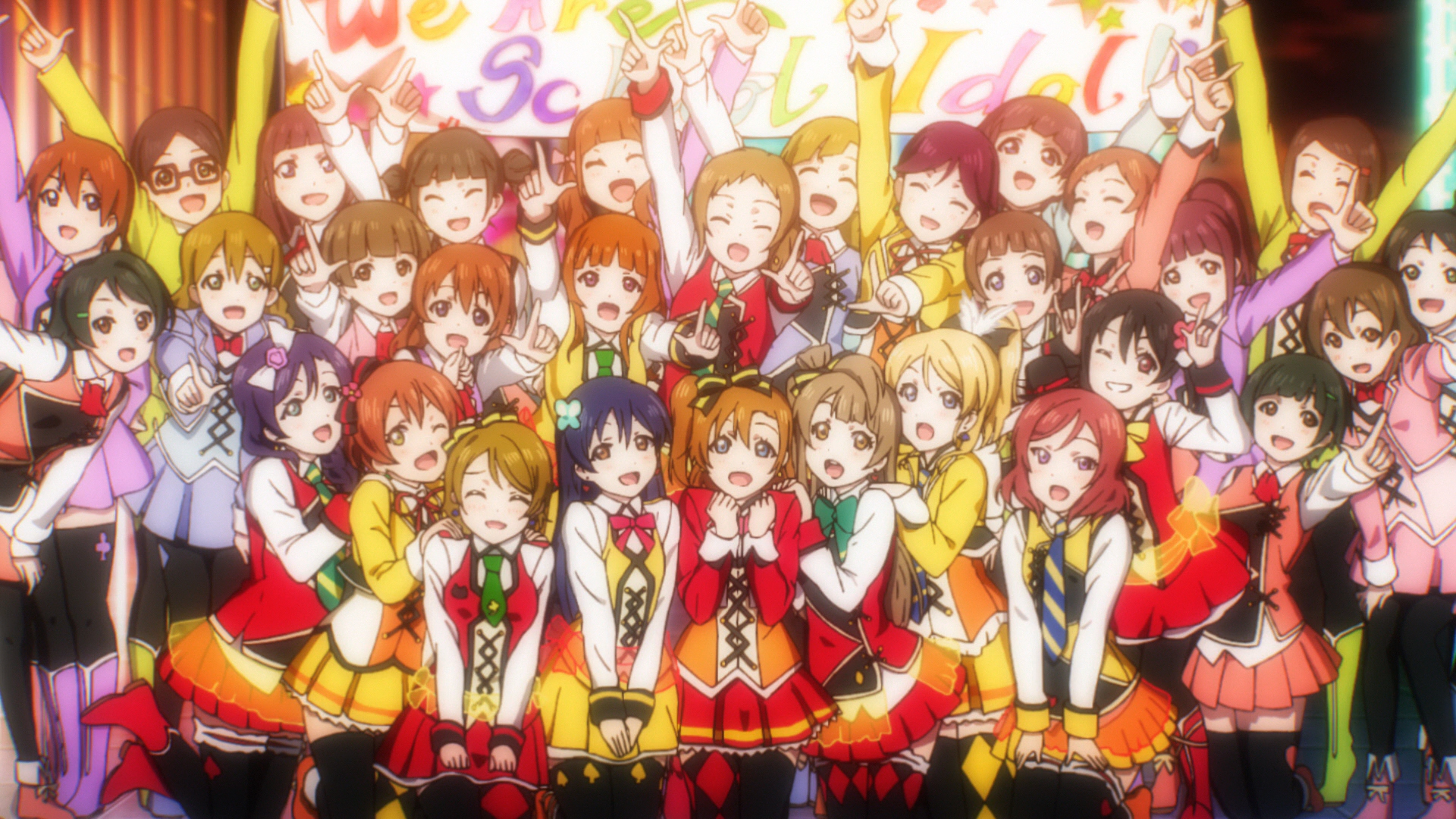 While it’s not quite perfect, overall, Love Live! The School Idol Movie is everything you could want from a piece that wraps up μ’s’ story. It stays true to its characters and themes that have been established in the TV anime and builds on them further with a range of fun and moving moments, while delivering some fantastic songs along the way. With this being a sequel, it does have the pre-requisite of seeing the rest of the anime first, but it’s not really trying to draw in newcomers at this point. It’s a love letter to the fans that have stuck with μ’s all this time and gives a sense of closure to a fantastic story. 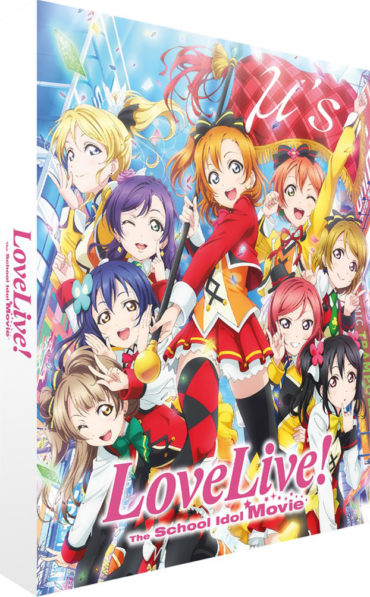