“After we travel around the world together…marry me, okay?” Mitsuki says cheerily to his boyfriend Asahi as they set off into Bangkok on the first stage of their epic journey/holiday of a lifetime. He’s only just admitted to Asahi on the plane that he’s afraid of flying – but now they’ve landed safely in Thailand, the young freelance photographer has regained his equilibrium. Although in downtown Bangkok, they manage to get lost searching for their hotel. Luckily for them, they’re rescued by Layla (originally Reiji, as she freely admits) who takes them under her wing. Over dinner, she explains that in Thailand there are more than eighteen sexual and gender identities. “The culture here allows people to be more open about their uniqueness.”

The countries Mitsuki and Asahi visit in Volume 1 are Thailand, India and Georgia – and after their whirlwind trip to Thailand, India comes as something of a shock. With no one to help them, they find the intense heat oppressive and Asahi begins to flag, showing signs of strain. Even before the trip (Asahi’s mother calls him at the airport to check he’s okay) we’ve been fed little hints that Asahi has undergone some kind of life-changing health-related episode and the mangaka continues to drip-feed more hints (a significant scar on his torso, the occasional concerned question from Mitsuki) as to what he has had to undergo six months earlier.

Tbilisi, in Georgia, offers a welcome relief from the heat of India for the two young men – as well as the chance to visit Sioni Cathedral where they’re captivated by the atmospheric interior and its frescos. But – small world! – they are astonished when a young Japanese woman hails Mitsuki in the cathedral. It’s none other than Kayo – his ex and girlfriend in high school days. Mitsuki is unsure how Asahi feels about this unexpected encounter and is surprised when Asahi suggests they have dinner with Kayo and her friend Ecchan. This leads to some truly awkward exchanges as Asahi (who earlier admitted his main reason for choosing Georgia was his love of wine) passes out after one glass too many of the local red.

Anyone who’s travelled abroad (before all the COVID restrictions, of course) will identify with Asahi and Mitsuki’s experiences. It’s impossible to read this volume without a broad grin of recognition in some places – and, in other places, a tear in the eye. Mitsuki’s reaction as the flight to Thailand takes off is both funny and very relatable – and instantly drew me into the story! From the very start, Mone Sorai cleverly reveals the lives and personalities of the two intrepid travellers as their adventures lead to them learning more about each other away from the familiar world of home in Japan.

It’s the detailed research that delights and convinces – lightly worn as it’s neatly threaded into the story and the drawings so that we, the readers, experience the journey through Mitsuki and Asahi’s dazzled eyes (and Mitsuki’s camera lens). The contrasting reactions of outgoing, impulsive Mitsuki and sensitive Asahi who has a tendency to overthink everything, make them a great pair of viewpoint characters. It will be fascinating to watch how their relationship changes and evolves as their travels continue and they discover different attitudes to sexual and gender identities.

Mone Sorai’s character designs for her main protagonists are not conventional for a BL series, reminding this reader a little of CLAMP in their xxxHOLIC mode (such long, slender legs!) although the close-ups and depictions of the people they meet are very expressive; Mone Sorai’s distinctive graphic style remains very much her own. Particularly impressive is her gift for conveying in greyscale the places the two are visiting so vividly – and the foods too! (Check out her striking double-page image of the Ganges at sunset – with the awe-stricken faces of the two travellers below.)

Translation for Tokyopop is by Katie Kimura and it flows very naturally, conveying the different voices of the people the two men meet, as well as the authorial voice in the background, setting the scene and occasionally adding an observation or two on how things are going for the two protagonists.

This is a charming and lively travelogue, in which we follow the growth of a relationship against the backdrop of changing landscapes and cultures – with all its ups and downs. I’m really looking forward to the second volume (coming later this year) in which the travellers go to Finland, Germany and Italy! 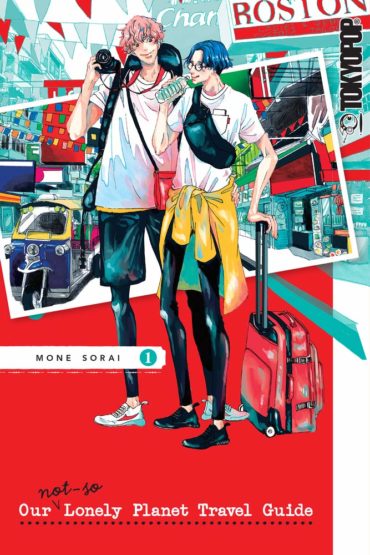 Asahi and Mitsuki continue their round-the-world journey as they land in Finland! But when they encounter some unforeseen obstacles, how well will their relationship survive?