Asahi and Mitsuki are travelling round the world together. They’ve made a deal that they’ll get married if they’re still together when they return to Japan. They’ve just arrived in Finland and as it’s winter, they’re very hopeful they’ll get to see the Northern Lights. A chance encounter with a friendly lesbian couple leads to an introduction to a helpful local guide, Timo, (he looks like Santa Claus, says Mitsuki) and they set off with him and his dog Edd to a remote lake. Where they wait. And wait. Perhaps it’s not their lucky night.

Next stop is rainy Berlin – and the cold and damp sets Asahi’s operation scar tingling, triggering all-too-vivid memories for Mitsuki of Asahi’s brush with mortality six months ago. However, Asahi senses that all is not right with Mitsuki who is usually a bundle of energy and enthusiasm. But each time he asks, Mitsuki insists that he’s fine – until he collapses in the street, sending Asahi into a panic. Luckily, a passer-by has heard them speaking Japanese and comes to the rescue. His name is Leon and his wife Yuriko is Japanese. This Good Samaritan takes them to his house and calls a doctor to attend to Mitsuki. Later, when Mitsuki is on the mend, Leon and Yuriko take the two to visit an authentic Weihnachtsmarkt (Christmas market) where they can sample all kinds of traditional German treats, such as stollen and glühwein. And make memories…

Paris in winter, though, turns out to be something of a let-down; even given the pair’s accepting attitude, they find the incessant preying on tourists at well-known sites difficult to handle. After several disappointments, Asahi makes a mysterious promise to Mitsuki to show him heaven! (As this involves a long journey by coach, I’ll leave it to the reader to discover exactly what Asahi’s promise turns out to be.)

After France, the pair cross into Italy, where this time Mitsuki has a surprise for Asahi: he’s fluent in Italian. He reveals that his maternal grandfather came from Venice and as Christmas Eve draws near, he finds out from his mother that his grandfather’s younger sister Gina (whom he’s never met) is running a guest house in Venice. They end up staying with Gina for Christmas and in a heart-to-heart chat, Asahi learns some surprising facts about her that she’s never even shared with Mitsuki’s family. But the biggest surprise comes from Mitsuki who has a little Christmas gift and a very special promise for Asahi.

One of the many pleasures of reading this very special manga is the way mangaka Mone Sorai skilfully balances moments of mischievous humour, cheekily teasing her readers one moment – as on the very first page, with a steamy scene that turns out to be… well, I’ll leave it to you to discover exactly what’s going on – and the next, delving into much more serious issues involving our two travellers and their relationship. Even though we’ve been encouraged to take the relationship between Mitsuki and Asahi as the Real Thing from the get-go, as the young men pursue their travels, they find themselves forced by circumstances (often out of their control) to reassess and re-evaluate how they feel about each other.

It’s in these chapters that we also get to learn that they haven’t yet come out to their parents – and Asahi has childhood memories that trouble him of the attitude at home being, even if not outright homophobic, nevertheless uninformed and unsympathetic to the possibility of same sex love. And just as the two men are learning more about each other as they encounter the pitfalls of travelling abroad as well as the photo opportunities that photographer Mitsuki craves, it’s impossible not to sympathise with their feelings and reactions. Especially poor Asahi who suspects that Mitsuki is feeling ill as they set off out into the rainy chill of Berlin but every time he asks, Mitsuki insists – of course – that he’s fine! Later, of course, when he’s on antibiotics and recovering, he also insists that he didn’t want to alarm Asahi (why are these scenes so familiar, I wonder?)

This is one of the most charming and readable BL stories available right now, as well as a fascinating travelogue, attractively illustrated by the mangaka and filled with descriptions of the delicious food sampled (mostly enthusiastically) by Mitsuki and Asahi on their travels. But at the heart of the story – and what keeps the reader turning the pages – is the dynamic between the two and how it’s changing and – in spite of some rocky moments – deepening. It’s not going to be plain sailing ahead for them as a couple when they return to Japan, given their traditional family backgrounds, but they’ve met many different couples already on their journey to show them that same sex relationships can flourish as well as conventional partnerships. And if some of the kind and hospitable strangers who help them out along the way stretch the reader’s credulity a little too far, Mone Sorai can be forgiven for always adding something to make the two (and us too) reflect on their lives because of these unexpected encounters. 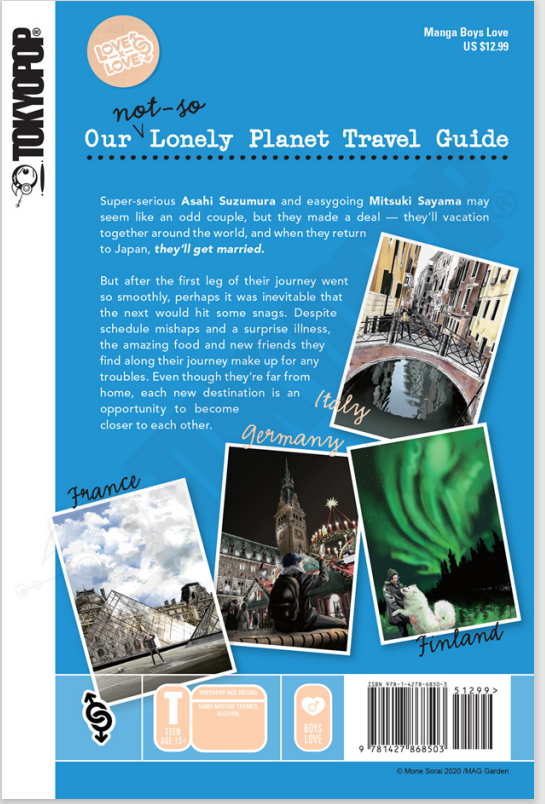 Given the Teen 13+ Age Rating (and the original publisher) in spite of the ‘Mature Themes and Alcohol’ mentioned on the cover, this isn’t a Boys’ Love that presents explicit scenes; the emphasis here is on portraying the ups and downs of an established and ongoing relationship.

The translation by Katie Kimura for Tokyopop for their LOVE X LOVE list deals effortlessly with all the different languages (and the occasional fourth wall-breaking observation from the mangaka).

So which country will Mitsuki and Asahi visit next? Surely they’ll be making their way to the United Kingdom soon? You can keep up with the next chapters in Japanese at the Mag Comi website – but let’s hope that Volume 3 will appear before too long. (This review is of the digital edition – but if you prefer a paper copy, that currently is scheduled to be released on February 22nd 2022.) 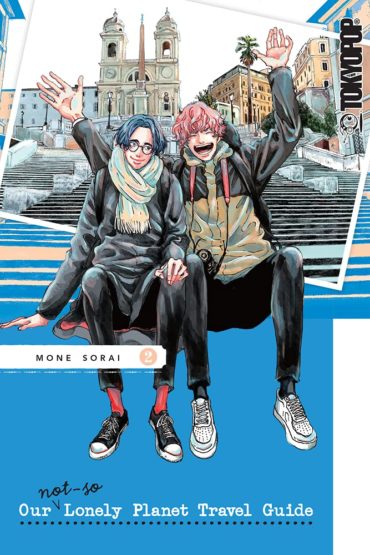 Our Dreams at Dusk: Shimanami Tasogare combines magic realism with the cruel realities of everyday life in a compelling and beautifully drawn manga; this title is absolutely not to be missed!