Otherside Picnic is an episodic horror/thriller story, originally penned as a light novel by Iori Miyazawa in 2017 before being adapted into this manga by Eita Mizuno and, most recently, an anime series produced by LIDENFILMS and Felix Film.

The story follows two young women who each, for very different reasons, find themselves in a strange world they call the “Otherside”. Our main protagonist, Sorawo Kamikoshi, is a 20-year-old student and urban explorer who has a keen interest in the occult and ends up discovering the Otherside by accident while exploring an abandoned building, opening a door to find herself in a world that is very much not Tokyo, with a vast marshland sprawling out beyond.

While she initially uses the Otherside for a bit of escapism, Sorawo underestimates how dangerous this other world is and ends up being attacked by a strange alien-like creature she calls a “wriggler”, due to its snake-like, wriggling appearance. While looking at this creature, Sorawo begins to lose her sanity and falls paralysed into the bog.

A blonde-haired young woman named Toriko Nishina stumbles upon the stricken Sorawo while looking for her friend Satsuki, an occult researcher with whom she often journeyed to the Otherside but who has seemingly vanished without a trace. After rescuing Sorawo and killing the wriggler, the two decide to team up to explore this other world and hopefully find the missing Satsuki.

Having really enjoyed the anime adaptation of this series, I was eager to give it a go in manga form to see how the story fits into a different format. While a lot of the positives that made me enjoy the anime adaptation are still here, I’m not sure if the manga is the best way to present it.

The story itself is interesting, although it’s divided between two separate strands: the encounters with the strange monsters, and the search for Satsuki. The former is where it spends most of its time and is where you’ll get the most entertainment from it, as it takes spooky ghost stories and brings them to life in unexpected ways. In this volume you have the wrigglers, said to be a folk tale to warn against the dangers of snakes in the countryside, as well as the Eight-Foot-Tall Lady who is said to spirit people away. The overall designs of the monsters are very weird, and it’s made abundantly clear that they pose a real threat to humans as Sorawo and Toriko’s lives are constantly in danger, keeping the tension high in every encounter, and what you think might be the way out isn’t always the case, so it keeps you guessing as to what’s going to happen next.

Outside of these encounters and when it’s dealing with the mystery around Satsuki, it doesn’t hold up quite as well. There are a lot of things it needs to set up and it uses the downtime between the encounters to overload you with exposition. While a little bit of explanation is welcome, here it tries too much to tell us what is going on, rather than showing it through the girls’ adventures. Pair this with the constant narration from Sorawo, who appears to be telling us the story after the fact, and it just becomes a bit of a slog to get through. I do know from the anime however that it is a bit slow to get going, but improves later, so I’m hoping that is also the case here.

I do quite like the characters though and our main pair make for an interesting combination. Sorawo is quite plain and boyish but is very outspoken and tries to act like a voice of reason, although it’s mostly just her being a bit of a coward. Toriko is the more adventurous and impulsive one and defies her very feminine appearance by toting around guns and filling the role of an action hero at points. The chemistry between the two is good, which is a necessity for the yuri elements in here, none of which are explicitly stated, but you can see the attraction between the pair through their words and actions, even if it’s one-sided at the moment.

The world itself also has a lot of potential, being a dark reflection of the real world with an abandoned and apocalyptic feel that could throw up literally anything. It’s also heavily influenced by the novel Roadside Picnic by Arkady and Boris Strugatsky, which you can feel not just in the title but in the structure of the world itself and in the way the wrigglers turn into mysterious artefacts that Toriko sells on to friend and researcher Kozakura.

The artwork generally looks good, pairing the weird-looking monster designs I mentioned earlier with some good character designs and a compelling view of the Otherside. However, with the manga being in black and white it does struggle with some of the supernatural effects such as Sorawo’s blue eye and Toriko’s invisible hand, which aren’t immediately obvious. In this case, in particular, I’d give the point to the anime adaptation. There are some nice touches from time to time though, for example the panel edges change shape when the pair are dealing with the monsters, becoming wiggly lines for the wrigglers, and bubbles for the Eight-Foot-Tall Lady.

The series is being published by Square Enix and is available both digitally and as a physical paperback. This volume is translated by Taylor Engel and reads well with no issues to note. There is a bonus short story at the end of the book that focuses on Kozakura and helps to build up her character a bit, which I thought was a nice and funny inclusion.

Overall, this first volume of Otherside Picnic presents the opening of a very interesting story, but perhaps not as effectively as its light novel and anime counterparts, making it sit in a weird place that makes it difficult to recommend over the other two formats. It’s a slow start in any case, with plenty of exposition needed to build up both the plot and the world of the Otherside, but it comes off best when tackling the dangerous creatures that inhabit the eerie other world. If this is your chosen option then it’s still a good read, but personally I’d opt for the anime or light novel over the manga. 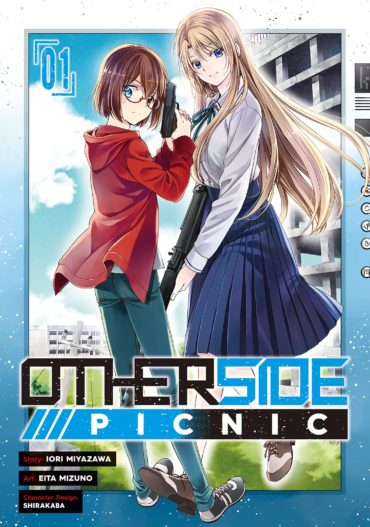 After seeing off the Eight-Foot-Tall Lady, Sorawo and Toriko are spirited away to “Station February”, an abandoned railway station on the Otherside where a lost platoon of US Marines is defending against a literal horde of faces.