Sorawo and Toriko’s adventures into the deadly and mysterious world of the Otherside continue in this second volume, which gets to throw off the shackles of trying to explain the set-up and focus more on exploring different forms of the horror genre.

We continue from where we left off in Volume 1, with Sorawo and Toriko facing the Eight-Foot-Tall Lady, an apparition that takes on the form of the person you wish to see the most in order to spirit you away to who knows where. With Toriko seemingly enraptured by it appearing to her as Satsuki, Sorawo must think of something fast to prevent her from disappearing.

While I won’t spoil the final twist to this tale, I will say that it is a fascinating climax that allows it to dig into the pair’s newly acquired supernatural powers and how they complement each other as a team. While Sorawo has the powers of observation with her eye, she can’t actually do anything to the creatures and weird things they encounter, which is where Toriko comes in with her transparent hand, which can actually interact with these things that plague the Otherside. It’s a simple dynamic, but one I like as it continually pulls them together and makes them rely upon each other to survive, helping to form what, in later stories, becomes an inseparable bond. The opportunities to create situations where they’re completely in peril on their own are also a key part of this, and that’s something we also see briefly in this story with some mind-bending scenes that make you and the characters question what in this world is actually real. And when that idea is so out-there and abstract, that becomes a really hard thing to answer!

After managing to escape back into the real world, we transition into the next main arc, “Station February”. While it does feel a little weird starting with the last chapter of the previous arc for this second volume (I personally would have perhaps varied the chapter counts so each volume is episodically self-contained), it tries to blend the two together by keeping the conversation around the previous arc going and using artifacts from the Otherside as triggers to pull Sorawo and Toriko back through without them having to use the elevator. This gets us into the thick of the action not only more swiftly, but more naturally, where it can create a foreboding and spooky atmosphere by subtly changing things until you realise that they’ve slipped through.

These transitional scenes are great for character development too, as this one sits Sorawo and Toriko down in a pub where they can discuss their latest exploits and just enjoy each other’s company without some kind of monster breathing down their necks. It’s fun getting to see their different personalities, like how Toriko can’t handle her drink very well, and how Sorawo comes across as socially anxious and quite guarded, but is just on that verge of starting to want to open up to her new friend. One thing to probably note here is that, while this is billed as a yuri work, it’s definitely one of those on the subtler side of things, to the point at which it struggles to convey anything beyond friendship for our protagonists which may disinterest some readers who are used to more straightforward romantic relationships.

Moving into this next arc, this sets up a substantial part of the overall story which anime viewers and light novel readers will know we return to later, as it’s broken up into parts as our protagonists get spit back and forth between the Otherside and the real world in different situations. Anyway, “Station February” puts Sorawo and Toriko in the middle of nowhere in the Otherside where they are chased by various monsters until they reach the abandoned Kisaragi Station, which has become home to a platoon of US Marines from Okinawa, who are not only stranded but are struggling to fend off the monsters’ assault.

While this arc is a bit more of a slow burn in terms of its pacing than some of the others we have had so far, this actually becomes a great read for those more interested in the horror aspects, as each individual chapter tackles a different part of the genre.

Chapter 8 features an extended chase sequence that has Sorawo and Toriko running from a horde of dog monsters that are more like amorphous blobs, with unclear features and faces. As you don’t know the nature of the threat, it comes off as very tense and creepy and you can only hope that the pair don’t get caught. Chapter 9 is all about suspicion and jumping at the fear of the unknown, as the pair encounter the US soldiers, most of whom would be more than happy to immediately shoot down anything unfamiliar. Those who know the story will pick up on some clever hints here too on not only what the entire situation is about but also who might get the chop later. Then Chapter 10 does an excellent take on the possessed phone call which goes into some very dark places as it hints at just what the monsters in this area might be. While it may seem that it’s jumping around different concepts, I think it works because of how each one ties into the actual situation and gives us just a little bit more information about what is really going on.

As well as having a good story, there’s plenty of good artwork in here as well, and I think it pulls off a fantastic creepy vibe with the monster designs. Character artwork is strong and emotive, with Sorawo in particular being a delight as she more readily shows her surprise and fear than the more experienced Toriko does. Again, it would have been nice for this to have been full colour to get the most out of showing Sorawo and Toriko’s supernatural powers, but it is starting to use other visual cues here so you can better tell when they are in use.

The series is being published by Square Enix and is available both digitally and as a physical paperback. This volume is translated by Taylor Engel and reads well with no issues to note. As with Volume 1, there is a bonus short story at the end of the book that tells events from Kozakura’s perspective, but this time it doesn’t really add much in terms of extra details.

Now that the exposition is out of the way, Otherside Picnic is starting to pick up into a very interesting exploration of common themes in horror and science fiction, pairing an isekai mindset with a solid leading duo that just needs maybe a little more depth adding to their current relationship to make it a bit more compelling. 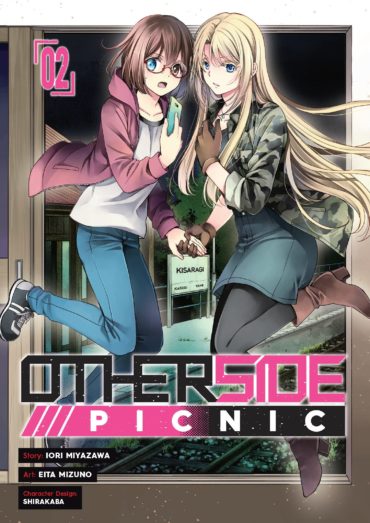 Step into the world of the Otherside, a bizarre and eerie world filled with dangerous creatures from popular folklore that the young women Sorawo and Toriko must face in order to find Toriko’s missing friend, Satsuki