Vampire Hunter D is one of the most successful and enduring Japanese novel series, having started in 1983 and with new novels still being written to this day. Created by Hideyuki Kikuchi, who also created Wicked City, and illustrated by Yoshitaka Amano (whose work has ranged from Speed Racer to the Final Fantasy games) these novels have resulted in the creation of a title character whose ventures into anime and manga have left their mark on popular Japanese culture. Dark Horse are now releasing these omnibus editions of his novels, while Graphic Audio is to release fully dramatised audiobook versions of these books from December onwards.

The story of Vampire Hunter D arguably starts in what was then the futuristic 1999, when a nuclear war struck the Earth. Among the survivors were vampires, or Nobles as they called themselves, who gained control of shelters and technology that allowed them to create their own civilization, with them as the dominant race. While they had all the benefits of future technology, they still liked their medieval-style castles to live in – some things never die, including the Nobles, unless a stake was struck through the heart. The Nobles, however, brought about every kind of monster to subjugate and control the humans they fed on, and even went as far as to wipe out of humanity’s memory of the weaknesses vampires have, like garlic. However, the Nobles grew decadent, the humans would not stop rebelling, and now humanity is once again establishing itself as the dominant race, although the Nobles are still feared.

It is now the year 12,090 AD, and the main areas of fighting between Nobles and humans are in the frontier regions, far away from the centralised Capital. It is here where vampire hunters travel to kill their pray and make money. Among the greatest of these hunters is the one simply known as D. Dressed in black, wearing a wide-brimmed hat, wielding a crescent sword and riding a cyborg horse, D has several advantages over the average hunter. For starters, he is a dhampir, a cross between a human and a vampire, giving him the abilities of both, and who is seemingly related to the “Sacred Ancestor” – Dracula. He is much stronger than any human, but he can also travel during the hours of daylight for most of time, although sometimes he can be struck by “sunlight syndrome” which can cause sudden exhaustion. D also has on him a special blue pendant which can disable just about any technology vampires may be using to protect themselves. Then there is D’s left hand, which contains its own creature, more than happy to talk back to D, with his own magical abilities which he can create by consuming the four elements. He can even bring D back from the dead.

This book contains three different stories. The first, simply entitled Vampire Hunter D, sees D helping a monster hunter called Doris who has fallen victim to a vampire’s bite. Not only that, but the son of the town’s mayor is constantly trying to have his wicked way with her, and another vampire hunter in the area appears to turn traitor and sides with the vampire in question in exchange for immortality. In the second, Raiser of Gales, D finds himself having to deal with a case where vampires are hunting in a village in which ten years earlier, four children suddenly vanished and a month later, only three returned. In the third story, Demon Deathchase, D is in a race against time against a family of hunters as they track down a vampire who is trying to escape with a human girl that he loves, and who loves him in return.

In all of these novels the main attraction is the central figure of D. This half-human, half-vampire creature of seemingly infinite power and the ability to stop all that comes his way is an enigmatic being. Like any professional, he has the right tools for the job, and when it comes down to the fight, while he might lose the odd bout, he will always be able to return and win the final round in a thrilling way. This is partly thanks to Left Hand, who is able to help D regenerate. Left Hand also adds some comedy to the overall dark tone to the series due to his wisecracking nature, in contrast to the always serious D.

D and his Left Hand are the only recurring characters to appear in all three novels. D is a traveller and as such, he is never in one place for too long. Once the story has ended, he is back on his cyborg horse and riding to his next job. There are however some similarities when it comes to side characters. Normally he comes to the assistance of a young woman and, like in many a horror story, she ends up as the “final girl” who survives the terrors around her while everyone else perishes.

As well as the writing, the illustrations add to the dramatic tone. Amano’s artwork, which appears throughout the book, brings to life the gloomy setting of the stories. It enhances the argument that the black-and-white drawings you get in manga, as well as novels, can be better than colour pictures. You get the feeling that you eventually find yourself in a “grimdark” setting.

Regarding the production of this collection, Kevin Leahy’s translation is generally fine, although one or two things do stick out. Some of the expressions feel as if they have been toned down because of bad language, such as: “Oh, you worthless sack of dung.” You get the feeling that “shit” would have been the more suitable choice if you are insulting someone. Some passages feel like incorrect typos like: “Don’t make such a puss.” I’m guessing that should be: “fuss”.

While nothing major, another issue is the use of enlarged initial letters at the beginning of substantial pieces of text. Generally this is no problem, but there is a bit of a design flaw when it opens with mention of D, because there is no space between his name and the second word in the sentence. Thus: “D awoke” can read like: “Dawoke”. You also get “Dhalted” and “Iaccomplished”.

Vampire Hunter D is an entertaining read, mixing elements of many different genres to create something very different from what is often available. If you are looking for something as a change from the more over-populous genres like isekai, it is one you may wish to seek out. 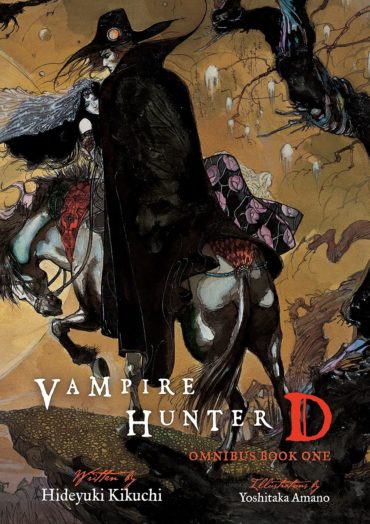