Celebrate the legacy of Akira Toriyama and Toei Animation’s iconic Dragon Ball franchise next summer with the Dragon Ball Symphonic Adventure, a concert experience that combines scenes and sounds from Dragon Ball and Dragon Ball Z, with the late Shunsuke Kikuchi’s original score being performed by the world-renowned Royal Philharmonic Orchestra, with live vocals by Hiroki Takahashi, the singer of Dragon Ball‘s very first opening theme “”Makafushigi Adventure!”. The concert will take place at The SSE Arena, Wembley in London on Sunday 7th August 2022, with tickets going on sale at 10am on Friday 10th December at www.gigsandtours.com and www.ticketmaster.co.uk. Those on O2 Priority will be able to purchase tickets from 10am on Wednesday 8th December.

Since 2019, the Dragon Ball Symphonic Adventure has toured the world with events in France, Belgium, Spain, Portugal and Taiwan. A North American event was announced for 2020, but was cancelled due to the coronavirus pandemic. Overlook Events, the company behind this event, have previously brought the music of other pop culture hits to life with events for Saint Seiya, Final Fantasy VII Remake, Studio Ghibli and more.

Created by Overlook Events, the concert is built on the Narrative Symphonic Experience concept, which mixes a symphony orchestra with rock instruments, live vocals, sound effects and light synchronized to a compilation of anime excerpts projected on giant screens, following a strict narrative. As a result, Dragon Ball Symphonic Adventure is a concert experience that achieves a musical and technical mastery still very rare in an industry dominated by cinema-concerts.

As great enthusiasts of Akira Toriyama’s saga, we spent long months carefully selecting and analysing each scene to draw out the essence of the Dragon Ball story. While reconstructing each arc, each scene was thoughtfully set to new orchestrations of the classic music, to align with our Narrative Symphonic Experience concept. Nothing was left to chance. Now, we invite you to enjoy every minute of this concert experience, from the opening trumpet notes heralding the first transformation of Son Goku, ready to unleash his uncontrollable fury against the mighty Frieza.

Produced by Toei Animation and distributed in the U.K. by Toei Animation Europe and Funimation, Dragon Ball is one of the most iconic and recognisable franchises in anime. Born as a manga in the pages of Weekly Shonen JUMP magazine, Akira Toriyama’s story has been adapted into four television series and twenty feature films, with the twenty-first, Dragon Ball Super: Super Hero, slated for release in 2022. 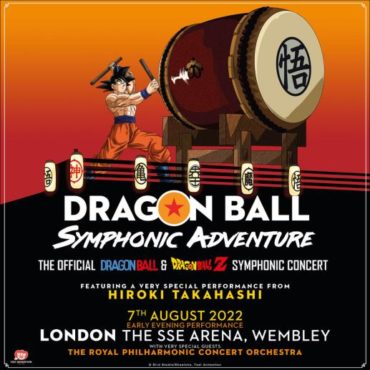 Eighteen years have passed since the television anime Dragon Ball GT was first broadcast on Japanese television and now Shonen Jump’s hit shonen series will be returning to the small screen this July with Dragon Ball Super, which will feature a new original story written by the franchise’s creator Akira Toriyama, taking place several years after the climatic end of Dragon … Continued

Earlier today, Manga Entertainment UK hosted their usual panel at Manchester’s MCM Comic Con event, where they unveiled a selection of titles that will make up their releases in the second half of this year. Perhaps the biggest new announcement was of the theatrical feature Dragonball Z: Battle of the Gods or maybe even their timely announcement … Continued

Late in 2019 Manga Entertainment celebrated the 30th Anniversary of legendary anime Dragon Ball Z with a special collector’s edition – and now the writers at Anime UK News have had the chance to take a look.