One of things that immediately comes to mind when reading the latest volume of Yotsuba&! is: “Finally, a new volume has arrived!” Fans of the excitable green-haired pre-schooler have been waiting for over three years for the fifteenth volume in the series to come out and now she is finally back.

For those unfamiliar with the series, the story follows five-year-old Yotsuba Koiwai, a little girl who finds delight in just about everything she encounters. Most of the stories centre around her and the interactions with those around her, namely with her adoptive father Yousuke, his friends Takashi “Jumbo” Takeda and prankster Yanda, and Yotsuba’s next door neighbours, the Ayase family.

In this volume, Yousuke gets fed up of being cold and declares the joyous time to bring out the kotatsu; Yanda persuades Yotsuba that their house needs a blender so they can make banana juice; Yotsuba and some of the Ayase siblings go on a rock-collecting trip to the beach, and she later joins the girls as they are in the middle of a cram study session. Yotsuba then takes up some crafts, creating her own little book and finally she goes shopping for a backpack as she “is a big girl” preparing for her first day of school.

Yotsuba&! is famous for several reasons, one of which is that author Kiyohiko Azuma (who also created Azumanga Daioh) has said in the past that there would be no anime adaptation. The closest there has been to one is a series featuring a spin-off character, the cardboard robot Danbo, who does not appear in this volume. Thus the series is one of the most popular manga that has no anime.

However, despite having no TV presence, the series still remains popular and it is easy to see why when reading it. Yotsuba is such a joyous character that it is impossible not to be cheered up by her, and indeed by her utter innocence with the world around her. A prime example of this is the chapter “Banana Juice” – or to be exact, “Yotsuba & Banana Juice!”, the chapter titles fit into the punctuation of the manga’s title – where Yanda manages to get Yotsuba to pester her dad into buying a blender rather than buy one himself as it would mean him having to wash it in his own place.

One of the ways Yotsuba’s excitement is illustrated in the story is the reaction shots. Azuma’s way of designing a wide-eyed excitable Yotsuba is always engrossing. Another element is the use of lettering. In the original Japanese and the English translation, whenever Yotsuba gets excited about anything, the font changes to emphasise her passion, even when the subject is entirely mundane, like collecting pebbles from a beach. In the Yen Press release, the lettering is done by Abigail Blackman and she does a brilliant job. Stephen Paul’s translation appears to have no obvious issues.

Another appealing factor about the series is that Yotsuba&! is one of the few manga released in English that is suitable for children of all ages. The series can appeal to anyone, and those with kids who want to introduce them to manga could happily use this series as a way to start them off in this medium.

Yotsuba&! is still as fun and entertaining as it has always been. If absence does make the heart grow fonder, then the three years the series has been away help to prove this statement – although a shorter absence for Volume 16 would be welcome. 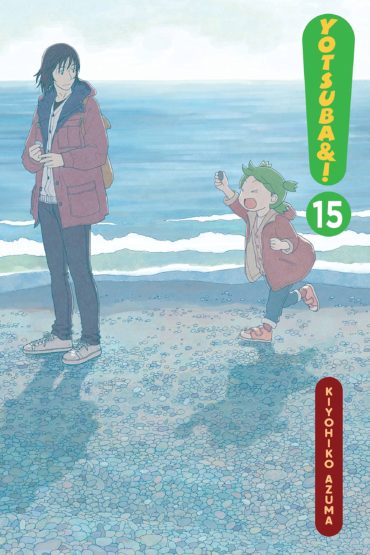