Get ready to experience another Weekly Shonen JUMP hit on the big screen this March: Crunchyroll and Funimation have today announced that Jujutsu Kaisen 0, an anime feature film prequel to Gege Akutami’s hit dark fantasy series, will be released in cinemas across the United Kingdom on 18th March 2022, following preview screenings on the 16-17th. You’ll be able to put your own rotten finger on the button and book tickets from 25th February.

The film is based on an earlier short manga series by Gege Akutami, Tokyo Metropolitan Curse Technical School, which was retroactively retitled to Jujutsu Kaisen 0 and released under that title by Viz Media in English-speaking territories in January 2021. Crunchyroll, who are distributing the film, describe the film’s story as follows:

When they were children, Rika Orimoto was killed in a traffic accident right before the eyes of her close friend, Yuta Okkotsu.

“It’s a promise. When we both grow up, we’ll get married.”

Rika became an apparition, and Yuta longed for his own death after suffering under her curse, but the greatest Jujutsu sorcerer, Satoru Gojo, welcomed him into Jujutsu High.

There Yuta meets his classmates, Maki Zen’in, Toge Inumaki, and Panda, and finally finds his own determination.

“I want the confidence to say it’s okay that I’m alive!”

Meanwhile, the vile curse user, Suguru Geto, who was expelled from the school for massacring ordinary people, appears before Yuta and the others.

“This coming December 24th, we shall carry out the Night Parade of a Hundred Demons.”

While Geto advocates for creating a paradise for only jujutsu sorcerers, he unleashes a thousand curses upon Shinjuku and Kyoto to exterminate all non-sorcerers.

Will Yuta be able to stop Geto in the end?

And what will happen to breaking Rika’s curse…? 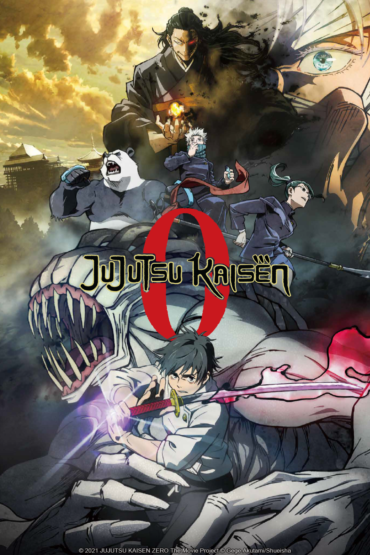 Coming to UK cinemas this week is Jujutsu Kaisen 0, a rare Shonen Jump! movie that is actually canon to the anime its based on, and in this case is actually based on an earlier version of the original manga so it acts as a prequel to the core series, with a familiar supporting cast and antagonist but a whole new protagonist at its heart…