“I just wanted to be happy with Rui.”

Rui and Yuujirou have been inseparable since they were little. Now these childhood best friends are in their final year at high school – and their relationship has deepened into love. When they were children, Rui (with his European colouring) was originally the smaller of the two (and cute) but the years have passed and now he towers over Yuujiro at 186 cm to his tough, judo black-belted friend’s mere 166 cm.

But love conquers all, even Yuujirou’s sensitivity about his height, and from the moment they both confessed their feelings, they’ve been blissfully happy and going steady. They haven’t come out to their families yet but it’s just a question of choosing the appropriate moment… However, looming over them and their friends is the approach of graduation and the need to plan what to do next. Yuujirou’s got it all worked out; he’s going to study architecture at university – so if Rui (who wants to train as a designer like his French grandmother) picks a university close by, they can share a flat and live together 365 days a year at last!

Just as it looks – to Yuujirou, at least – as if he and Rui are set fair, ready to take their next step into the future together, Rui goes quiet on him when he suggests living together. “I wanted you to know first,” Rui says, eventually breaking his silence. “I’m going to France for school.” Rui’s French grandmother, a designer, has invited him to study in Paris – and he’s determined to go. But it’s going to be four long years apart – and Yuujirou takes the news badly, while doing his best to reassure Rui that he’ll support him in his decision. And then, to rub salt in the wound, when the two families join up over an impromptu meal out at Christmas, the topic of girlfriends comes up, prompting an uncharacteristic outburst from Yuuijirou who is still hurting from what he can’t help but see as Rui abandoning him. “Maybe it’d be better for everyone,” Yuujirou says as he walks away from Rui, “if we just pretended like there was never anything between us.”

Graduation day arrives – and then Rui is off to France. Is their relationship really over?

The first volume Deko-Boko Sugar Days delivered a charming, feel-good story of the blossoming love between two childhood friends, enlivened by many cute chibi panels and amusing expressions. But in this second volume, mangaka Atsuko Yusen brings her two main characters face-to-face with the reality of leaving school and taking their first steps into the adult world. ‘Bittersweet’ is an apt adjective to describe what happens. Many high-school relationships crumble and fall apart under such stresses and although readers will be rooting for this partnership to endure the extra pressures put on them by society for being in a same-sex relationship, let alone being separated by many thousands of miles for four long years, it’s by no means a foregone conclusion that they won’t drift apart. Praise, therefore to Atsuko Yusen for not shying away from depicting the feelings of abandonment that Yuujirou undergoes when his dreams for the future are so rudely shattered. He wants to wish Rui well as he embarks on his chosen career path but can’t reconcile those altruistic feelings with the pain he’s experiencing at being abandoned.

Atsuko Yusen’s art is attractive and she’s developed her own immediately recognizable style; she’s another BL mangaka to have come from the Pixiv webcomic stable like Shou Harusono (Sasaki and Miyano) and Mika (I Cannot Reach You). The theme of childhood friends weaves throughout the manga and as the mangaka’s drawings of the two as little children are adorable, it’s difficult to ignore the significance of their enduring relationship. As to the BL aspects, the manga earns its Mature rating for several consensual (but censored) scenes of a sexual nature which develop naturally from the characters’ feelings. The ‘joke’ underlying the two volumes is that – due to Rui’s genes and adolescent growth spurt – given his height, in a traditional BL manga, he’d be the seme (dominant) and shorter Yuujirou the uke. But it’s the other way round here (see dekoboko* below). Praise, then, to the mangaka for showing us that Rui might be gentle-natured but he’s determined to pursue his career in design, no matter what – and it’s Yuujirou who falls apart when he realizes that Rui is going away. It’s painful to watch but it feels real and convincing. It’s the same when she shows us that both young men feel torn up inside by Rui’s decision – but find it impossible to articulate this to each other.

The translation for Tokyopop’s LOVE x LOVE list is by Christine Dashiell who, as always, delivers a readable version that flows really well. As with Gorou Kanbe, the editorial team at Tokyopop have brought us another attractive BL mangaka, whose manga are well worth reading for the positive approach to same-sex relationships and the lively, sympathetic way the story is told.

Deko-Boko Bittersweet Days will be released in both physical and digital versions on March 22nd 2022.

*I was curious as to what ‘dekoboko’ means and, on further investigation, I found that it can be translated as ‘uneven’ which probably refers to the difference in height between the two protagonists and also, perhaps, their contrasting characters. However, there was also an unrelated animated TV series Deko Boko Friends of 30-second-long episodes for preschoolers that aired in Japan from 2002 to 2011.

‘The words 凸 (deko) and 凹 (boko) by themselves mean convex and concave (easy to remember which is which since they’re pretty visually memorable!) and while dekoboko means uneven or bumpy, a 凸凹コンビ (dekoboko konbi) is also a term for an odd couple, which these two definitely are.’ 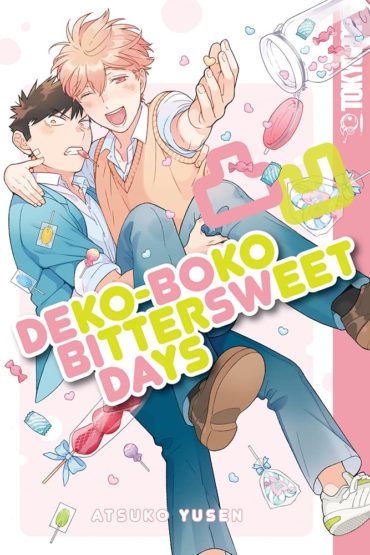 Tomorrow, Make Me Yours Review

‘Espoir’ is French for ‘hope’. Is this a promising start for the new Yuri series from Tokyopop?