When it comes to the BL genre, publisher Tokyopop has had a successful year bringing a large variety of titles to the Western market. This month in particular the company has five new BL titles making their digital debut, one of which being Scramblues which I’m here to take a look at today.

This one-volume story follows Haru Kurosaki, a graphic designer who’s just been tasked with designing an album cover for famous artist Eddie Astley. When the two first meet, Haru finds Eddie intimidating and hard to please, not helped by the fact Eddie suggests Haru isn’t putting his all into the project.

With that meeting ending the work week for Haru, he goes off to enjoy a long-awaited concert where an indie band called Roze are performing. Unfortunately for Haru, Eddie turns up as a special guest. He recognises Haru in the crowd, which leads to our protagonist being invited backstage after the show as a “friend of Eddie’s”.

Seeing Eddie at the concert gives Haru a completely different impression of him. Here he’s softer, happy to joke around with the lead singer of the band who’s a friend from high school and that leads Haru to realise a lot of his perception of who Eddie is comes from the fact he’s been labelled a ‘prodigy’.

After the night of the concert, Eddie and Haru begin to become friends and Haru puts more thought into what Eddie is trying to convey in his music – which in turn may help his design. But the more time they spend together the more Haru realises that his newfound feelings for Eddie may not just be friendship…

As far as debut works go, this one from mangaka Mame March is a good one. Despite only being six chapters long, the book manages to tell a complete story without feeling like it’s rushing or leaving out details. Admittedly I was surprised to find the mangaka pulls this off so seamlessly; I thought for sure we’d have some loose ends, so I’m certainly pleased to have gotten to the end and found my worries unfounded. And it’s also refreshing to have this kind of working adult-orientated story compared to all the high-school or college romances we’re prone to seeing in the English market.

However, where this manga may fall short for some readers is in the romance department. Unlike a lot of single-volume series in the genre, the romance in Scramblues is put on the back burner. It’s clear early on that there is some chemistry between Haru and Eddie, but nothing gets set into motion until the last couple of chapters. I’m conflicted about whether this is a problem or not, since while it means the relationship does develop naturally throughout the story – I also feel it’s just a bit too slow.

Where artwork is concerned, there’s not a lot of focus on backgrounds or details, with most panels being close-up shots of the character’s faces. Maybe this is because the mangaka put her all into the musical performance scenes, which are some of the best in the book, thanks to capturing the characters playing their instruments so well. But I wouldn’t say these scenes make up for the rest of the book, particularly due to the fact the characters often look off-model from page to page and don’t have very detailed eyes which makes them look a little dead inside. It’s a shame because when the art is good it’s very good, but that’s just not often enough.

As previously mentioned Scramblues comes to the West thanks to Tokyopop where it has been translated by Christine Dashiell. The translation reads well with no issues of note. The manga is currently only available digitally, but a print release is planned for the 21st of February 2023.

Overall, Scramblues is a bit of a mixed bag. If you’re looking for something heavy on romance then this won’t satisfy you, but in terms of being a manga about an adult couple working together and falling in love, this has plenty to offer. Especially given that it manages to wrap up its story within the constraints of a single volume! 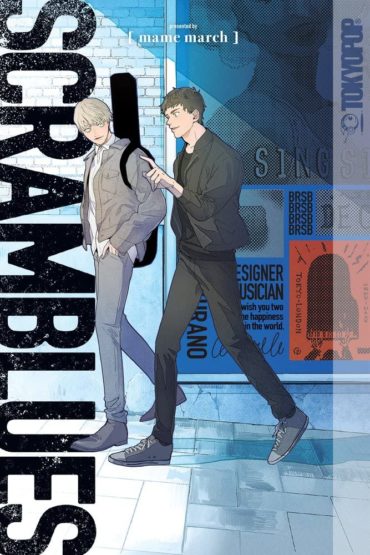