Toward the end of 2021, J-Novel Club released the first volume of Goodbye Otherworld, See You Tomorrow which proved an interesting take on the usual isekai fare. Now the series returns for its second outing and it’s time to find out if it proves as enjoyable a read.

When we reunite with Keisuke and Nito, we find them continuing their travels across the world. Sick of driving around without a map, Keisuke suggests the two seek out a town where they might be able to come across something to indicate where in the world they are and where they could go next. This leads them to a small village that also houses a temple, which the two decide to stay at for a few days.

At first, Keisuke believes the temple to be abandoned, but it’s not long before this notion is dispelled when he meets an old woman called Fago who comes up to the temple each day to clean. Also staying at the temple is Charolles, a young woman and fellow traveller in search of the end of a story she once read. Because the temple houses a large library, Keisuke hopes they’ll be able to find a map but rather than spend time searching for it, it’s not long before our protagonist finds himself wrapped up in the stories of Fago and Charolles…

It turns out that Fago lives close to the temple and she’s not the only one. Not too far away there is a theatre which is home to Jill and Paula and a little way from there lives the guinea pig person, Monty. It’s not just a coincidence that these people all live so close together and as Keisuke spends more time with them, he comes to realise that they’re all connected and these connections are important to them, even if their relationships have become strained. Before they set off once more, Keisuke dreams of bringing the group together and rekindling their feelings. After all, in this desolate world, they have nothing besides one another.

As you may have gathered so far, instead of being somewhat episodic, this book simply has one storyline. I’m undecided as to whether I like this change in direction from author Kazamidori or not, as the previous structure worked so well, but ultimately I think it works out fine in the end. There are certainly enough characters here where even if you’re not invested in one of them, you’ll find someone else to care about and, in a strange way, I suppose that’s reminiscent of the first book.

One of the big storylines in this release is centred around Paula, a wannabe dancer who became estranged from her family after coming out as being transgender. Initially, I was quite worried about this theme when the author introduced it, given that Japan doesn’t have a great reputation for handling LGBTQIA+ content, but to my surprise, Kazamidori did a great job with Paula’s story. It doesn’t gloss over any of the hardships of being transgender, nor does it make light of anything.

Some of the descriptions of Paula are a little heavy-handed and lean into ‘muscular guy in a dress’ stereotypes, but this is a setting in which being transgender isn’t particularly well understood and so it makes sense that the cast who are from this world aren’t very sensitive in their reactions or mannerisms. I’m largely willing to let it off the hook here since Keisuke, who knows better from originating from Earth, handles the whole thing more tactfully and it’s clear the author has no intended malice. And, like I say, the storyline itself is solid and thoroughly explores Paula’s feelings and circumstances, which more than makes up for any small misgivings I may have had.

The other thing I appreciate about this book is that it shows the divide between Keisuke who is an otherworlder and has found happiness travelling with Nito, and those who have lost everything in this world and have all but given up on life. Loss and relationships are the big themes of this book and it’s interesting to see how Keisuke’s optimistic personality rubs against the rest of the cast. While I liked the short story approach of the first book, I do think this kind of storyline was only possible with this change in approach and I think it has paid off well. It certainly makes it a highly recommendable read, given how well it all comes together!

As previously mentioned, Goodbye Otherworld, See You Tomorrow Volume 2 has been brought to the West thanks to J-Novel Club and is available digitally. The series continues to be translated by MPT and the translation reads well with no issues. I especially appreciate how the translation manages to stick to the right pronouns for Paula right from the off. This is also the current volume in Japan as of June 2020 with no signs of Volume 3, but if this is the end of the series, then it’s a fairly good conclusion so I don’t think readers should be worried about that.

Overall, Goodbye Otherworld, See You Tomorrow ends up being another rewarding read, despite a change in direction from the author. If you enjoyed the first book, then there is no reason not to continue on here. I also think the fact the LGBTQIA+ aspect is handled so well means that this series is now recommendable to a whole new audience who might not have looked at it before. 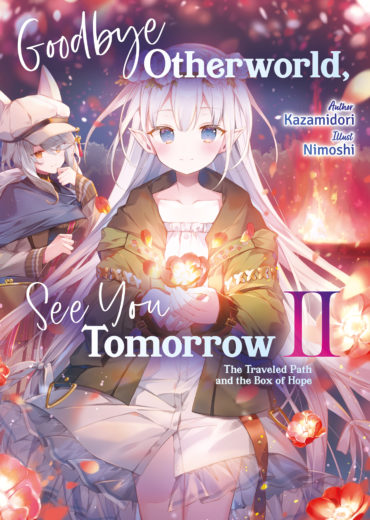 Title
Goodbye Otherworld, See You Tomorrow Volume 2: The Traveled Path and the Box of Hope

Keisuke has been all alone in a barren otherworld for a while now and just as he begins to reach his limits with going through day after day all by himself, he meets the half-elf Nito. As the two begin travelling together, light returns to Keisuke’s world and he begins to enjoy each day as it comes.