This is the everyday story of Hayakawa, a student at university, and his pet/companion Pen (who just so happens to be a penguin). Hayakawa is an easy-going young man (utterly oblivious would be a more accurate way to describe him) so it’s probably just as well he has Pen to look after him, do the household chores and cook his meals – even if most of the time he doesn’t notice, much to Pen’s annoyance. But Hayakawa’s kind-hearted friend Seto notices. He really appreciates Pen’s cooking skills. He can’t stop himself following Pen to watch him in action (folding laundry, going to the local supermarket) and is filled with admiration, wishing Pen could be his pet. But Pen is – for whatever reasons – devoted to the clueless Hayakawa. We also meet outgoing Ota, Hayakawa’s other friend, when he and Pen get into an okonomiyaki-making contest at Hayakawa’s place – although by the time all the chopping, mixing and cooking has happened and the okonomiyaki are ready to eat, what has Hayakawa done? Gone and made himself pancakes, which he’s scoffing, leaving – of course – no room to eat anything else.

And so they go on from day to day, celebrating Christmas with Seto and Ota, then Pen getting lost in the crowds visiting the shrine at New Year and somehow becoming part of a group undergoing the character-building ‘Yamabushi Experience’!  … until one day they come upon a female penguin (she has a cute bow on her head) in a state of great distress. Her owner has collapsed! And there, lying face-down on the pavement, is a schoolgirl. It’s time for Pen and Hayakawa to go to the rescue. Could this be the start of a beautiful friendship?

Penguin & House is mangaka Akiho Ieda’s first manga to be translated into English and it’s delivered in very short chapters (with several 4-koma strips at the end of the volume). This formula tends to rely on a single gag which is then developed and resolved by the end of the chapter. Kodansha have given it an All Ages 8+ rating, which is invaluable for school libraries seeking to expand their manga range. (Although the fact that the main human characters are at university doesn’t make it nearly as relatable as Cardcaptor Sakura or Chi’s Sweet Home for younger readers.) Also, the humour is not very younger-child reader-friendly. Silent Pen is quirky, rather than cute, and as we read more and more of Hayakawa’s insensitive, even thoughtless reactions to Pen’s hard work, we have to wonder why the much put-upon little companion doesn’t just up and leave. There’s no backstory, the situation is what it is. In fact, Hayakawa is so thoughtless at times (especially in the 4-koma gag strips at the end) that he comes across as rather unpleasant; the humour here just isn’t very funny.

The translation for Kodansha is by Sawa Matsueda Savage and kudos to them and the designer for the delightful and helpful translation notes at the back (such as Okonomiyaki or Yamabushi) each one with a little house-shaped image from the text to illustrate the subject matter. Splash pages (‘spot the difference’) and single images (Pen as Van Gogh, Yamabushi Pen, etc.) between chapters add to the fun. Nevertheless, in spite of these nice little extras, the overall impression is somewhat at odds with the manga the publicity blurb chooses to liken it to, going for the ‘if you liked these, you’ll love this’ approach: A Man and His Cat or Way of the Househusband. Neither of these titles seem like a good fit. There’s so much more heart in both those series and while Pen is very caring towards his owner, the running joke of the series seems to be that Hayakawa is so oblivious that he constantly frustrates the little fellow’s best attempts and then some. Also, in spite of the smitten Seto constantly telling us how adorable he finds Pen-chan, I find he looks rather sinister. It’s the eyes. But maybe that’s just me…

Volume 2 is out already from Kodansha and there’s a third to come at some stage. 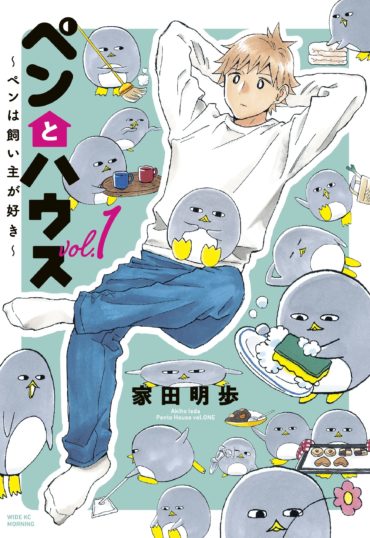 When I think way back into the early days of my anime and manga fandom, I can remember a time when I couldn’t walk into a WHSmiths and easily find a manga section to pick from. I had to take trips to the centre of London and find an obscure comic shop just off China town in … Continued

Who decided the prince should be with the princess? We’ve all (probably) been there, haven’t we? Our favourite character in a TV series is suddenly – and without warning – killed off. For heartbroken (and overweight) Kae Serinuma, it’s the last straw; she takes to her room, refuses to come out, even to go to school. … Continued

Can four handsome boys transform a horror-loving, darkness-hiding, beauty-hating girl into someone “normal”?

@ Full Moon Volumes 1 & 2 David is a vampire; Marlo is half vampire, half werewolf. The young men have been close friends since childhood and in the two volumes of Sanami Matoh’s light-hearted bit-lit manga series ‘Until the Full Moon’ they fall in love and get married. Oh – sorry – forgot to … Continued