Many of you reading this may be familiar with Sweetness and Lightning, a slice-of-life series that ran for 12 volumes and received an anime adaptation in 2016. Now author Gido Amagakure returns with the new series A Galaxy Next Door, but does it prove as delightful as her earlier work? Let’s find out!

The story follows Ichiro, a manga artist who’s forever struggling with deadlines as well as his responsibility as a parental figure to his two younger siblings after the passing of their father. Ichiro wants his romance series to become a big enough hit where he can put aside a college fund for the kids and not have to worry about making ends meet, but with his assistants constantly quitting when they land a series of their own, our protagonist always finds himself scrambling to turn his chapters in on time.

Luckily for Ichiro, his editor has just found him a new assistant called Shiori Goshiki who turns out to be highly capable! Her arrival is a whirlwind and the two begin to pour all of their energy into completing the manuscripts and then collapse in desperate need of sleep. When Ichiro awakens, he sees what he believes to be a pen sticking out of Shiori’s back and rushes over to help her, resulting in him cutting his finger on what turns out to be a sharp stinger protruding from Shiori’s back.

It turns out that Shiori is part-alien, part-human and someone touching her stinger means that the two are then genetically engaged to one another! Shiori has no idea how to break the bond between them and in the meantime, should she stray too far from Ichiro’s side, he’ll suffer the consequence of having a deterioration in his health. Until they can figure it out, Shiori has no choice but to move in with Ichiro, which means a sweet tale of romance and manga begins.

Because Shiori is such a talented assistant, Ichiro planned to keep her on even before this whole engagement problem, so having her move in works out for him. His siblings are also fond of her and happy that their big brother may be able to make his deadlines without losing sleep and becoming a wreck every time.

As the chapters go on, A Galaxy Next Door becomes part slice-of-life and part manga industry as the story flips between Ichiro raising the kids and working on his series. If you’ve read Sweetness and Lightning then you’ll understand why the author has chosen this path, because frankly, they’re great at depicting these gentle slice-of-life family moments.

Of course, these chapters aren’t all Ichiro-centric and we spend plenty of time with Shiori, as well as learning about her history. She comes from a small island where a meteorite once hit and the residents and their descendants gained some kind of alien genetics that allow them to understand what others are feeling by just being near them. Naturally, outside of this island, Shiori’s powers don’t work so she struggles with her new life in the big city and with Ichiro, whose feelings she can’t quite comprehend. This is compounded by the fact the two are now engaged and she’s beginning to care for him romantically but isn’t sure how he feels about her. Thankfully, that is answered by the end of this volume so it’s not going to be dragged out for books to come, which I appreciate and makes me eager to read more of their story going forward.

While the series may seem like a fluffy premise on the surface, there’s a lot of depth to the plot and the cast here. Author Amagakure is talented when it comes to exploring the emotions of our characters while also making sure the reader is having fun; it’s a delicate balance but one she manages to maintain. Her art style is polished, thanks to the many years of experience under her belt and with this being one of Kodansha’s larger format books, we get to enjoy some magnificent close-up shots of the emotional moments. This also balances out some of the busier pages that have a lot more and therefore smaller panels and lots of dialogue, but Amagakure isn’t afraid to turn the characters into chibi versions of themselves to better fit the space and that works well for the more comical moments.

As previously mentioned, A Galaxy Next Door Volume 1 comes to the West thanks to Kodansha and has been translated by Rose Padgett. The translation reads well with no issues to note and there are three pages of translation notes at the back which help explain some of the references made throughout the book. The series is ongoing in Japan with four volumes and Volume 2 is scheduled for an English release in July. The series is also receiving an anime adaptation next year, so there’s that to look forward to.

Overall, A Galaxy Next Door is off to a delightful start as it merges the day-to-day of creating a manga with a heartfelt slice-of-life story about an older brother doing his best to provide for the younger siblings left in his care. Gido Amagakure has created yet another enjoyable series that will leave you wanting more.

A free preview of the series can be found on Kodansha’s website here. 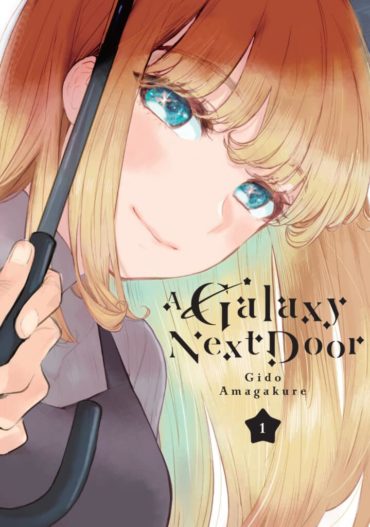 Title
A Galaxy Next Door Volume 1

A Galaxy Next Door Volumes 2 and 3 Review

In these two volumes of A Galaxy Next Door, we watch over Ichiro and Shiori as they navigate the difficulties of their new relationship. From telling Ichiro’s siblings to a visit from Shiori’s parents and a few cute dates in between, there’s a lot happening here!