24-year-old Misuzu Hara is single and teaches in a high school. Her best friend Minako is engaged to Hayafuji and is set on being a homemaker and ideal wife. However, Minako is unaware that four years ago, Hayafuji forced himself on Misuzu – and is still meeting up with her in secret for sex. When a rumour spreads within the school that one of Misuzu’s class, Niizuma, is having an affair with a middle-aged woman, the male staff insist that she must have a talk with him. But Niizuma is very different from the abusive, manipulative Hayafuji; he’s sensitive, perceptive and has a sexual hang-up when it comes to women’s bodies which he blurts out, perhaps hoping that his teacher might be able to offer some guidance or advice. “So…you’re saying men are to blame?” he says to which she, unsurprisingly, replies, “Who else is there?” However, he’s not ready to leave it at that. “There must be some way to keep gender from being a source of conflict. Otherwise you and I are both beyond saving.” When he looks up at his teacher, he sees that tears are trickling down her cheeks. But she’s unable to offer any words of support or comfort; quite the opposite – and he storms out, leaving her thinking, What I just did to that 16-year-old boy wasn’t a decent thing to do. It was the first time I ever gave a man a piece of my mind.

In contrast to Misuzu, Minako wants to give up work to concentrate on being a homemaker (surely an outdated dream, really, for a twenty-first century young woman). She’s not picking up on the strong messages her fiancé’s sending her, especially when it comes to not wanting to have sex with her.

Meanwhile Hayafuji takes some intimate photos of Misuzu during one of their lunchtime trysts, achieving an extra psychological hold over her. And then one of Misuzu’s class, the beautiful Tsubaki Midorikawa, is featured on the cover and inside Young Jump magazine in some revealing swimwear shots. Cue the older male teachers to express outrage and then to blame Misuzu, pressuring her to reprimand the defiant young woman who doesn’t see that she’s done anything wrong. Misuzu feels acutely the difference between the carefree student who sees no personal danger in making the most of her attributes – and her own predicament. Especially as Hayafuji has begun to text her, reminding her that he still has a certain photo of her…

First things first: this 2-in-1 volume merits its 18+ rating and warning as it contains imagery and situations that readers may well find upsetting. It’s a discomforting and unsettling read and the mangaka fully intends it to be so, aiming to shake us from our assumptions and preconceptions. But in doing do, is Akane Torikai delivering us a deliberately skewed view of the daily life of high school teacher Misuzu Hara? Is this how Miss Hara perceives her world? The high school students she teaches are obsessed with sex. In the staffroom, it’s just the same; the older (male) teachers are portrayed as being unsupportive to the point of outright hostile (are there no older female teachers in this school?)  – yet also salaciously leering behind the young woman’s back. Her engaged friend Minako brightly bubbles over with comments highlighting how fortunate she is to have snared her man, while pointing out how unattractive Misuzu must be to be still single. The irony, of course, in that her fiancé Hayafuji is the one who’s using Misuzu as his ‘bit on the side’ and she’s still complying, for reasons which she – and we – don’t yet entirely understand, except guilt and shame seem to be involved. Sex is being used as a form of control, whether it’s by the glamorous student Midorikawa, calling the shots in school, or the middle-aged Mrs Aoda, ensnaring Niizuma at his part-time job – but not once does anyone seem to be in a loving relationship or actually enjoying sex. And that’s what makes this such a depressing read. Of course, it could be that by the time we’ve read all the volumes, Misuzu will have overcome her (utterly understandable) trauma and Hayafuji will be exposed as the abusive manipulative rapist that he is.

So we’re presented with two individuals who are being used: Misuzu (who’s still secretly making out with Hayafuji who constantly belittles her yet claims he’s not turned on by his fiancée) and her student, Niizuma, the target of bullying within the classroom. Misuzu should, as Niizuma’s homeroom teacher, be able to counsel and support the young man. They should – and could – be allies. Yet the pressures placed on them both by the unhealthy atmosphere within the school (and I hope that this depiction of a high school is not implying that all Japanese high schools are like this) make any kind of meaningful conversation an impossibility. Niizuma impulsively accepts the confession of a classmate, Mika – and starts to date her, hoping, maybe, that being in an ordinary relationship will mean he’s left in peace. When Mika, a quiet girl on the plump side, who’s not one of the in-crowd, tries to establish a normal ‘going out together’ state of affairs with Niizuma, she finds that he’s not really invested in the idea and dissolves in tears, begging him not to break up with her, even if they merely keep up the pretence of dating. But after spotting Misuzu and Hayafuji in a café, he now suspects Misuzu might be trapped in an unhappy relationship… and for reasons not clear yet to himself, he knows he wants to protect her. Which is where another schoolmate, Mika’s friend, Kana Misato, starts to get involved (or is that interferes?)

This is Akane Torikai’s first work to be published in English, which is a little surprising as she made her debut back in 2004. Since then, Torikai has released over ten works and was an assistant for Minoru Furuya (The Ping Pong Club, Ciguatera) for a year and a half. She goes to some trouble to build up the oppressive atmosphere around Misuzu: reports of sexual crimes on the media; a thief stealing her panties from the washing; the unhelpful, hostile attitudes of her male teaching colleagues.

This Vertical 2-in-1 edition has two translators: Morgan Giles and Arthur Reiji Morris and they capture the voices of the high-schoolers particularly well. There are matte colour pages at the front of the book and halfway through where the second volume begins. Akane Torikai’s art is very accomplished so that we feel we know the main characters really well from their interactions and reactions. I should stress again that the 18+ rating is there for a reason and that there are scenes of sexual violence that some readers will find upsetting or triggering, so this is not recommendable to all adult readers by any means. I also wonder if they needed to be quite so graphically depicted. The mangaka has an agenda (in 2013 the #MeToo movement of 2017 had yet to take off, so in some ways it was ahead of its time) and it will remain to be seen in the volumes to come, whether that agenda overwhelms the story-telling in an unsubtle way or makes it relevant and relatable.

It’s not clear exactly how the mangaka will go on to develop her themes throughout the next three volumes to come (all 2-in-1) but this volume ends with Minako asking Misuzu a leading question. My hope is that not all the male characters will end up portrayed as villains and not all the women will be shown to be victims or constantly trying to compete with each other. (Are these students ever going to get their final qualifications and graduate? Nobody seems to pay attention in class or do a shred of homework. Just saying…) Volume 2 is due out in print in July. 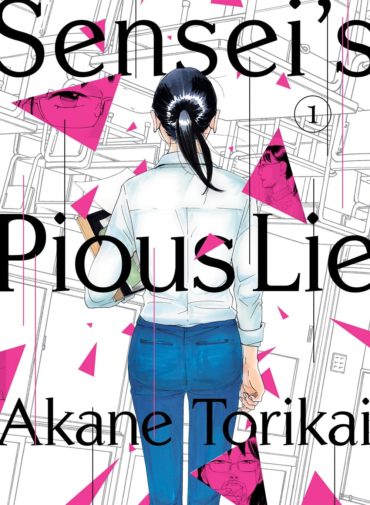 Emma Dreams of Stars: Inside The Gourmet Guide Review

What happens when a young woman who’s passionate about good food sets out to become a Michelin inspector? Find out in the colourful pages of Emma Dreams of Stars!

Inspired by Hikari Wanda’s charismatic dance moves, Kaboku has joined the high school dance club – to find out he’s the only first-year boy! Find out how that’s working out for him in the second volume of Wandance.