I think it’s fair to say that when it comes to the Girls’ Love market, the light novel industry is one that hasn’t quite caught on to the trend – at least in the West. So those looking for something new in the genre may have the new Yen Press release The Magical Revolution of the Reincarnated Princess and the Genius Young Lady catch their eye, but is it worth it? Let’s find out!

The story follows 17-year-old Princess Anisphia, born to a royal bloodline known for its strong magic powers. However, young Anisphia has no talent for magic and finds herself unable to use it! Since she has a brother who can take up the mantle of king later in life, Anisphia removes herself from the line of succession and pours her energy into developing “Magicology”.

As it turns out, Anisphia has memories of a past life in Japan and thanks to this, she has countless ideas for magical tools she can create, both to better the lives of those in the kingdom and also to give her the ability to experience something like magic. For example, Anisphia has a magical broomstick that she loves racing around on and this gives her the experience of flight magic without needing to be able to use magic herself.

It’s due to this broomstick that Anisphia finds herself accidentally crashing a noble party where childhood friend Euphyllia is being shamed for something she hasn’t done and then dumped by her fiancé, Anisphia’s brother! Anisphia does what every good friend would do and kidnaps Euphyllia, removing her from the situation, then back to the castle where she asks her father the king and Euphyllia’s father if she can take her on as an assistant in her Magicology research.

The king is outraged at his son’s behaviour in breaking off his engagement with Euphyllia and readily agrees to leave her in Anisphia’s care. Our protagonist is overjoyed and vows to protect Euphyllia no matter what, even readily proclaiming she’ll marry her if needs be – after all, she finds Euphyllia beautiful and has no interest in getting hitched to a guy.

For poor Euphyllia this is all a bit of a whirlwind and she has no idea what to do with herself now her engagement has fallen through. She’s spent so much of her life preparing to be queen alongside Anisphia’s brother, that she’s never had a chance to think about anything else. Life with Anisphia gives her much more freedom than she’s used to and for the first time, no one has high expectations for her.

The more time Euphyllia spends with Anisphia, the more she begins to see a new path opening up to her. Anisphia is well known throughout the kingdom for being eccentric, mostly due to her weird inventions and impulsive nature that constantly give the king a headache. But she desperately wants to create tools that help people and allow those with no magical talent an opportunity to feel like they are using magic. Euphyllia sees the value in this dream, but she also sees first-hand that Anisphia desperately needs someone to keep her in line before she does something that will cause her harm (like fighting vicious monsters for materials…).

A lot of this first book is set-up, with Euphyllia working through her feelings and Anisphia causing trouble left and right. At first, I thought the pacing was too slow, but the climax manages to make up for that, forcing Euphyllia and Anisphia to work through some of the more difficult feelings they’ve been having. As far as the romance goes, that’s a slow burn and mostly put aside but it’s clear that Anisphia has feelings for Euphyllia and as far as Euphyllia goes, she feels something for Anisphia, she’s just not sure what. Unsurprising perhaps, given she spent all that time engaged to Anisphia’s brother, but I’m sure as the series goes on, she’ll muddle through and find an answer for herself. At the very least, she knows she wants to stay by this eccentric princess’s side.

Because so much of this volume is laying foundations for the future, it’s not the plot that truly shines here but the interactions between the cast. I love Anisphia’s quirky personality and it’s great fun watching the reactions of those around her as she runs around causing chaos wherever she may go. Some of my favourite scenes involve her maid, Ilia, who also doubles as something of a motherly figure to the girl. Up until Euphyllia arrives, Ilia has been the only one able to keep Anisphia in line and it’s clear that there is a strong bond between the two, no matter how much they bicker.

Usually, I find these kinds of light novels lean into either being silly with no real emotional depth or too serious, but author Piero Karasu manages to capture the delicate balance of keeping things light-hearted and also emotional when it needs to be. I appreciate how much character development this first entry provides while also simply being fun to read; it’s sure to please readers, no matter what they’re looking for,  and leave them eager to follow more of Anisphia’s adventures in the future.

As previously mentioned, The Magical Revolution of the Reincarnated Princess and the Genius Young Lady Volume 1 comes to the West thanks to Yen Press and has been translated by Haydn Trowell. The translation reads well and I especially appreciate how Trowell has handled Anisphia’s dialogue, which is quippy and often hilarious. This release includes colour pages handled by series illustrator Yuri Kisaragi which show some of the cuter moments of the book as well as profiles of the main cast. On the whole, the illustrations in this first volume are focused on the girls being cute together, but that’s perfectly fine, given not a lot of note happens until the end otherwise.

The series is ongoing in Japan at 4 volumes and Volume 2 is scheduled for an English release in July. Yen Press also has the manga adaptation coming out in June.

Overall, The Magical Revolution of the Reincarnated Princess and the Genius Young Lady Volume 1 presents an entertaining read about an eccentric young princess and the woman she brings on as an assistant. This first instalment can feel a bit slow as it sets out the foundation for the books to come, but the personalities of the cast and the silly situations they find themselves in will have you eager to come back for more. 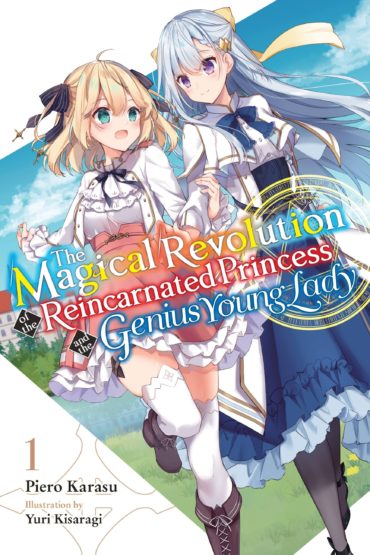