Pirito is a utopia, protected by the mechanical goddess Marie, who looms over the skies above and sings her song to bring peace and love to all, but no one can see or hear her, except for Kai. He’s a young man who works in the factories, with unique markings on his hands and the ability to hear even the faintest of sounds, which help his village to find hidden oil and other treasures on the island. Pipi, a girl from the same village, has been in love with him since they were kids, but can a boy with such unique gifts and a destiny bestowed upon him by the Gods be able to return her affections? Or do the Gods have reasons for this love to never bloom?

Usamaru Furuya isn’t a household name in the West, but he’s been writing manga for many years, mostly  horror with dark subject matter, his most famous work being Lychee Light Club, which has an anime and live action film adaptation. In the UK, he currently has only a few of his works translated into English, but more are due to debut this year: No Longer Human – a retelling of Osamu Dazai’s work of the same name – and The Music of Marie, which is very different kind of story from what he’s known for. Instead of horror, it’s a fantasy coming-of-age series, with heavy themes of religion, free will, love and sacrifice. In the press release for this series, it ‘s marketed as a ‘soaring fantasy with artwork to rival Studio Ghibli’, and I will give it that; the artwork for this series is stunning. The world feels very lush and full, there’s tons of details given in each panel that feels like this world is not only a beautiful place to live but is also LIVED in. If you liked the look of Laputa or Howl’s Moving Castle – so fantasy meets steampunk – then you’ll fall in love with the artwork in this series. The God and otherworldly figures that are in this story, including Marie, are also very distinct; they look part of the same world but are also proportioned differently to feel like beings from another dimension. I’ve shared a few pages in this review, but the art looks lovely outside of the double page spreads as well. I’ve never experienced any of his work previously, so I’m interested to see how Usamaru Furuya’s artwork and storytelling here compares to his horror stuff, mostly to know if any of his other work is as baffling as this series.

The Music of Marie is over 500 pages long and collects both volumes of the original story, so it’s a thick book but not as heavy as other omnibus releases. Still, there’s a lot that unfolds in this book and the slow, low stakes, romance-heavy opening gradually builds to a story far bigger than expected, covering a lot of heavy topics that, I feel, were not written well. It’s very hard to explain why without massive spoilers so the best I can do is discuss the themes and why they don’t work, rather than specific plot points. But if you would rather go in blind, I recommend you stop reading this review now. 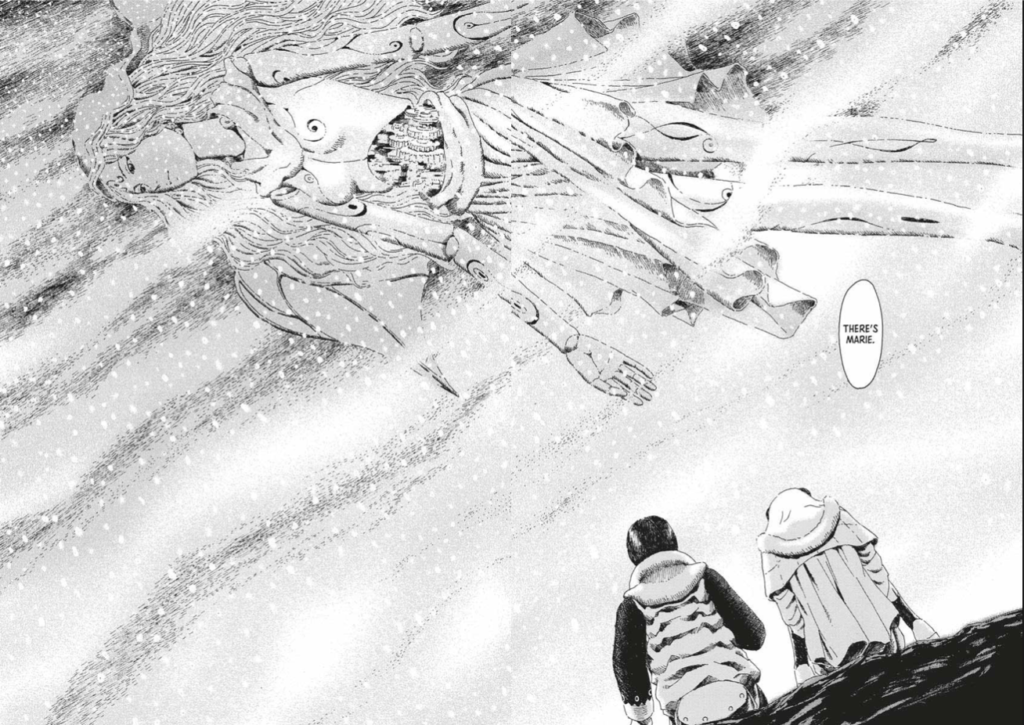 Firstly, the utopia in this world is, for the most part, developed quite well. Not only do we get a full map of the island, but as we read, we experience a lot of their customs (like religious festivals and marriage proposals), how they interact with other islands, and so on. There’s a lot of details that are also thrown into the narrative but aren’t part of the main story; for example, there’s a chapter explaining that there’s an ‘island of man’ and ‘island of woman’ that have just men and women living on their respective islands, with marriage between the same genders being common and accepted. The cost for this utopia, however, is revealed later as Kai comes into his power. Again, I won’t spoil but with the steampunk look and religion being a heavy focus, you can see from the start where the author might be going with it, and the potential for an interesting and nuanced discussion could have been made. But then, towards the climax, we get a montage of what the world is like (supposedly) without Marie, and the picture we get is very much of an apocalypse: children dying, war breaking out, rape, guns, explosions, etc. These images are not subtle and reflect what our world looks like in terms of clothing and buildings, however they only take up half a chapter and are presented as quick flashes, so the scales aren’t balanced. The manga just switches from one extreme to the next to make their point and expects us to believe that if we all just get along, don’t go too far with our technology and believe in God, then we’ll have a utopia. However, this very surface level way of thinking completely falls flat if you give it even a few minutes’ thought; for example, religion has been used as a constant excuse to discriminate against LGBT people, not help them like this book makes it out to be doing, and if technology really is the cause of so much war and violence, then how do you explain Romans or Vikings and similar groups who existed years upon years? Violence is a part of history, not a new concept created because we decided to manufacture video games consoles. But, when you get to the end and read the author’s afterword, it starts to make a lot more sense. This manga was originally released in Japan 2016, and Usumaru Furuya expressed sadness at how the world (at the time of release) had become more violent and he feared for the start of World War III. But the story was originally written 15 years before its release, so that would make it 2001, and I don’t really need to say what historical event may or may not have had an impact on the mangaka at the time when he wrote it. Considering the political landscape we’re in now, with World War III somehow even more on the cards than it was in 2016, I can understand what he was trying to do: a wish fulfilment of a better world where discrimination and war no longer exists. I can imagine some readers may find this world an enjoyable, almost pleasant read to escape into. But from my point of view, it rings hollow with the flat characters driving the story and the sacrifices we need to make in order to apparently get to this perfect world.

Then we get to the twist ending…which again I’ll try not to spoil but…I really can’t leave it unmentioned. If the story had ended before the epilogue, I’d probably have given this book a higher rating, saying it was a misguided, childish attempt at what it wanted to do and left it there. But the epilogue takes place 50 years after the story’s end, and somehow makes it worse; it doesn’t work with the themes it’s trying to go for, the story it’s trying to tell or in terms of the characters. The main problem is in how the story is told; the book switches between Kai and Pipi’s point of view, with the character-driven, romance drama being fuelled by Pipi and the religious, fantasy side of the story guided by Kai. The epilogue is mostly from Pipi’s point of view, but the attempts at horror in the ending are to do with Kai, so narratively it doesn’t hit the mark because it doesn’t make sense when going back and re-reading for the clues building up to it. There are a few good ‘body horror’ images, with the machines playing a large part but again it’s from Kai’s side of the story and what he goes through, so to suddenly have it matter to Pipi when she knows nothing about it, it makes no sense. If the story was tweaked to have them both together in certain key scenes then MAYBE it couldn’t have landed better, but it still doesn’t change the epilogue from being a twist ending that was just there to be a ‘gotcha!’ moment to the audience. 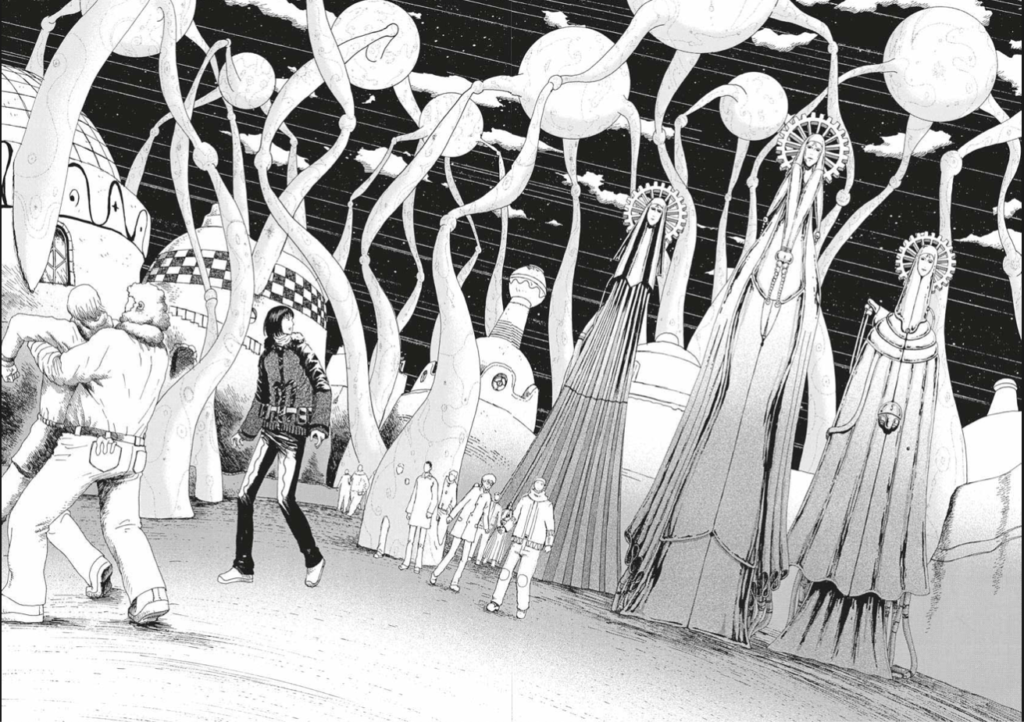 The English translation by Laura Egan is good overall; the quirky elements of the Pirito world are explained clearly and the various lines of religious scripture that are thrown into the book are also well placed and feel as if they are written from an old text. The book comes with a couple of colour pages, to mark the start of each volume.

The only way I can describe The Music of Marie is baffling. The look and feel of the world are good but the characters aren’t interesting, the themes and message of the story are not well written, with the bewildering epilogue making it all worse to the point where I wondered what I just wasted my time reading. If you want something that is completely different to what’s currently in the English manga market, and don’t mind switching your brain off for a wish fulfilment story, then you could probably find a lot to like in this series. But for everyone else, I would recommend not bothering with the tune this story is trying to sing. 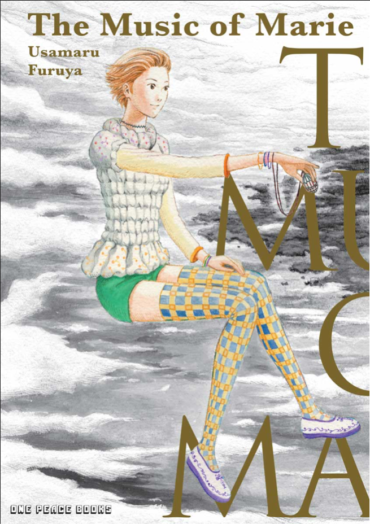 Title
The Music of Marie