The most disruptive one here is me. Why am I like this? – Myeong Lee

High School Reunion. Myeong Lee and Seonho Han, now 27, meet again for the first time since they left school. The story begins at night as the onetime classmates attend a reunion. Why haven’t they kept in touch? And why is Seonho wearing a ring?

Nine Years Ago. The flashback to when Myeong and Seonho were classmates in school is told in light, fresh colours: turquoise, white, sky blue, as though the boys’ memories are suffused with dazzling sunlight. It’s stiflingly hot. Myeong has a collapsed lung and can’t take part in sports (or – lucky! – be conscripted into military service, like the others in his class). When he has a bad coughing fit and starts to hyperventilate, it’s responsible Seonho, the class president, who takes him to the nurse’s office (as usual in manga/manhwa, the nurse isn’t there) and helps him to calm down and breathe normally again.

Flash forward nine years – and all that was left unsaid back then is turned around. Myeong has never forgotten Seonho. But what about Seonho; what does he feel about Myeong and what does that ring mean? Is it already too late to hope for any kind of relationship?

I’ve read the manhwa Hyperventilation several times now and I’m still not 100% certain whether this is the finished version or there’s more to come. The young men’s story could end where this volume concludes with much not being said in words but a great deal conveyed in expressions and gestures.

I’m not wholly convinced by Bboong Bbang Kkyu’s BL manhwa, even though TOKYOPOP have delivered the material in the original full-colour version – and very attractive and significant the colour is, too. However, there’s no escaping the fact that there’s a different rhythm to the dreamlike way the story is conveyed.  There’s very little dialogue. The time scheme hops around; even the first few pages are a flash-forward as the narrative then tells us how we got there – by spooling back to ‘Thirty Minutes Ago’. The nine-year flashback that occupies much of the middle of this volume only enhances the dreamlike effect, especially given the significance of the colour scheme. The fluidity of the narrative makes it seems as if we’re reading the condensed version of a story conceived originally as a film.

As it turns out, there is also a 6-episode anime version (2017, so possibly before the manhwa was published in Korea in 2018 – and the episodes are only three minutes in length). This also explains the very detailed section ‘Reference Materials’ at the end of this volume with comments from the author. ‘Reference Materials’ contains scenery backgrounds and character sketches more appropriate for animation than a static graphic novel.

In spite of the minimal story and character development, this is a very good-looking manhwa: Bboong Bbang Kkyu’s character designs are attractive and the subtle colour palettes add greatly to the atmosphere, whether it’s in the classroom on a thundery day or in the city at night. But it’s hard to form much connection with the characters and their hopes and dashed dreams. Looking back at other full-colour manhwa I’ve enjoyed reading, I wonder if this might also be because the white speech bubbles are so much more prominent when set against colour, which is quite a distraction when we’re used to reading dialogue in the same colour ink as the rest of the manga or manhwa, meaning it blends more seamlessly and naturally into the narrative.

Translation and quality control for this Tokyopop digital-first edition (the paperback will follow in October) is attributed to CCC International. Hyperventilation is a Boys’ Love, released in Tokyopop’s LOVE x LOVE collection and the Mature 18+ rating lists ‘Nudity and Explicit Sexual Content’; it’s sensuously illustrated but there’s no non-con. It’s not possible at this stage to judge how effectively the all-important colour will be reproduced in the physical edition but it works extremely well in the digital version.

How much you enjoy Hyperventilation will depend on your willingness to let yourself be immersed in the visual and emotional experience. It’s a mood piece where minimal dialogue is used, sometimes recurring, almost like a refrain in a song – and the evocative colours of the different scenes play a vital part in conveying the atmosphere as well as the time and place. But if you’re looking for more traditional and detailed storytelling, then it may well leave you feeling a little unsatisfied. 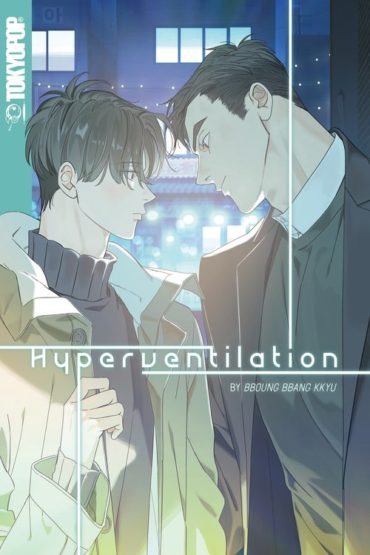