Here at Anime UK News, we’re particularly fond of vampire series so I’m sure it will come as no surprise to find me reviewing the new series The Vexations of a Shut-In Vampire Princess from Yen Press. But does it prove an interesting read? Let’s find out!

Our story follows vampire Terakomari Gandesblood (known as Komari for short), a shut-in who spends her days reading books and working on her own novel. Coming from a renowned family of vampires, Komari’s father doesn’t want her to spend her days closed off from society and after Komari pretends to have ambitions of becoming an empress, her father gets her a position as a commander in the Mulnite Imperial Army!

Komari hears of her new position when a new maid, called Vill comes to wake her one morning and our heroine soon figures out that she has no choice but to accept the job. Things only go from bad to worse when she discovers that her unit is composed of ruffians who are more than happy to revolt against their commanders, should they find them inadequate. Against the odds, can she lead the group to victory in the battles that lie ahead?

Although the country Komari lives in is at war with the six surrounding countries, there’s no real risk to anyone since they live close to a magical item that will resurrect anyone near it, no matter what fatal wounds they may have had inflicted upon them – although they still feel pain, so they certainly don’t want to get hurt to the point of death, even temporarily. So these countries are essentially fighting for the hell of it, with no chance of anyone coming out on top but they enjoy going to war against one another, so no one really cares.

Winning the fights, as it turns out, isn’t a problem for Komari’s ragtag team; her bigger problem is the fact she can’t use magic and is weak and clumsy thanks to her aversion to drinking blood. This means that she needs to spend all of her time pretending to be mighty without actually being made to do anything. Her maid Vill understands Komari’s predicament and tries her best to help out, at least when she’s not lusting over Komari anyway…

Normally I would be all for a set-up like this. A shut-in character who is brought out of their shell and given friends and companions they can rely on is often a wondrous story to watch unfold, but The Vexations of a Shut-In Vampire Princess just isn’t ticking the right boxes for me. Most of this is due to the humour being so centred around Vill’s infatuation with her master, which author Kotei Kobayashi does try to explain toward the end of the book but that comes too little, too late. It’s not much fun to read through dialogue and situations that border on sexual harassment and that Komari is so obviously uncomfortable with.

I could probably put up with this if the humour wasn’t the main focus of the book, but we spend more time with Komari and Vill interacting than we do anything else, including the battles. Not that I think focusing on the battles would have helped either when Komari’s company consists of oddballs like a soldier who only speaks in raps. It’s just very disjointed with the setting and I think most readers are going to struggle to get past that and enjoy what little story there is here. Once we get toward the end and it delves into why Komari became a shut-in, I had a much better time with the book but that wasn’t enough for me to drastically change my opinion.

I think where I ultimately come down on this is that although there are some entertaining bits here and there, it’s just not recommendable. There are so many other stories out there at this point that there is no reason to waste your time on something that has so little respect for its cast and shows no signs of improving on that front either.

As previously mentioned, The Vexations of a Shut-In Vampire Princess Volume 1 comes to the West thanks to Yen Press and has been translated by Evie Lund. The translation reads well with no issues to note. This release includes colour pages with illustrations by riichu, who is also the artist of the (currently not licensed) manga adaptation. As much as I’ve complained about the book, I have to say I liked the illustrations which capture some of the fight scenes and depict some of Komari’s subordinates in great detail. The series is ongoing in Japan with 7 volumes while Volume 2 is scheduled for an English release in August.

Overall, The Vexations of a Shut-In Vampire Princess Volume 1 proves to be the most disappointing light novel I’ve read in quite some time. The issues with it are so prevalent that there’s no getting around them for long enough to find a compelling reason to recommend this to its intended audience. A huge shame, given what it could have been, had some of the personalities of the cast been turned down a notch (or three!). 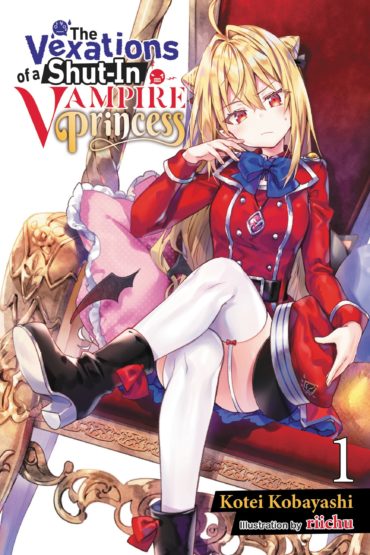 Title
The Vexations of a Shut-In Vampire Princess Volume 1