From Yoko Taro, the mind behind the NieR and Drakengard video game series comes SINoALICE, a manga adaptation of a mobile game directed by the acclaimed creator. Does this first volume prove an entertaining adaptation? Let’s find out!

Our story follows Alice, a high-school girl who at night has dreams where two marionettes ask her what she desires and how she’d like her world to change. Inside her dreams, Alice lives a fairly ordinary life, filled with a nice family and close friends she can rely on. She heads to school every day, fantasises about getting together with her handsome teacher and generally spends her days peacefully.

That is until her best friend in the dream stabs Alice’s love interest and then climbs to the top of the school roof, determined to jump off and kill herself. Alice confronts her in the hopes of stopping her but then decides to jump with her effectively killing both of them. Then she awakens, back in the real world instead of her dream but when she goes down for her breakfast as normal, she finds a grisly scene. A strange girl is sitting at Alice’s kitchen table, eating toast, while completely oblivious to the fact Alice’s family has been brutally murdered and are lying in pieces all around the room.

As it turns out, Alice and the girl sitting in her kitchen are embroiled in some kind of death game. Each girl chosen for this game wields some kind of magical power and is charged with killing the others, although that hasn’t stopped a couple of them from teaming up.

Due to Alice fainting because of the traumatic sight she’s presented with, we don’t learn much more about this setting except for the fact it’s some kind of death game. It’s no surprise that a series with Yoko Taro involved would be violent and weird, but I wish more time had been taken to explain what exactly is going on here. It doesn’t help that Volume 1 only contains three chapters, one of which is spent entirely in Alice’s dream. I appreciate the series is going for a shock factor when we move from that to reality, but when it’s at the expense of some kind of explanation, it just doesn’t work for me.

Most of my understanding of the plot and even simply the fact it’s a death game came from a combination of the synopsis and a short story included at the end of the book! Even for readers who are particularly taken with the genre, this just isn’t going to click with them because there’s so little to grab onto. It could be that the faults are due to the series being based on a mobile game; perhaps that too struggled to explain itself at the beginning or maybe the manga inserted original content and that’s where things went wrong. I’ve not played the mobile game, so I can’t particularly point fingers at it but I know manga based on mobile games often don’t work out well for a variety of reasons.

While I have plenty of criticisms for how the story has been handled, when it comes to the artwork I came away more positive. Drawn by mangaka Himiko, the art is detailed where it needs to be and suitably conveys the horrific scenes in all their bloody glory. The fight scenes are easy to follow and quite graphic, so a warning here for those of faint heart. I appreciate that this is one of Square Enix’s bigger book formats since the bigger panels give plenty of room for the details of Himiko’s art to come through.

As previously mentioned, SINoALICE Volume 1 comes to the West thanks to Square Enix Manga and has been translated by Caleb Cook with lettering by Phil Christie. The translation reads well with no issues to note. The series is ongoing in Japan at three volumes with Volume 2 scheduled for an English release in October, with Volume 3 to follow in March 2023.

Overall, SINoALICE disappoints in the story department with little to get readers invested. If you’re particularly attached to the genre or the creators behind the project, then perhaps there is merit in sticking around since the artwork is quite good. However, for everyone else, I struggle to find anything redeeming here.

A free preview of Volume 1 can be found on Square Enix’s website here. 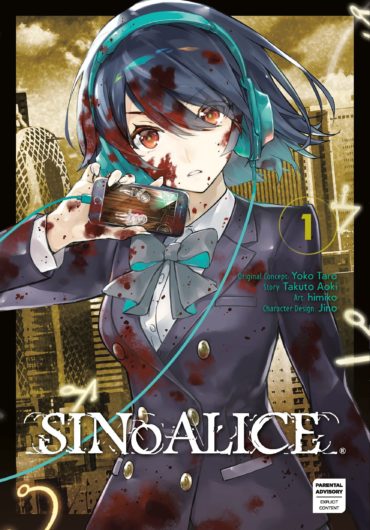