When I last reviewed Suppose a Kid From the Last Dungeon Boonies Moved to a Starter Town, the anime adaptation had just begun. Now that has finished, but that doesn’t mean there isn’t plenty more manga to keep fans going. Today let’s take a look at Volume 4!

This instalment of the series picks up from the end of Volume 3, where Lloyd and friends are taking part in the Military Academy sorcery tournament. Riho faces off against the headmistress of the Rokujo Sorcery Academy, Rol, in the deciding battle, but with so much history between these two, there is more than just the fate of the competition resting on this fight!

Ultimately Lloyd’s team comes out as the winner of the tournament and are given the Holy Sword as a prize, but Rol and her group aren’t happy about the outcome and plot to steal the sword. When Rol’s subordinate Phyllo informs her that sword is with Marie the witch they quickly set about seeking to steal something valuable they can hold hostage in exchange for the sword, but as always nothing goes quite right for this band of villains…

Phyllo steals an expensive orb from Marie’s home, but when Lloyd returns to find the place ransacked he assumes that it’s Maria who has been captured and races off to save her! This leads him to face off with Phyllo in a fight that quickly became one of my favourites in the series so far.

As usual, Lloyd assumes he’s not powerful enough to take down his opponent in a one-on-one fight, so instead, he challenges her to arm wrestle. This leads to the two destroying buildings and flying around the area as their ridiculous strength comes out in full force, I assure you, readers, that this is not a traditional arm wrestling contest by any means!

This fight comes alive thanks to the brilliant artwork on offer by Hajime Fusemachi. I’m sure no one else could depict the fun and insanity of this series as well as they can. I admit that, after watching the anime adaptation, my feelings for the manga had begun to be dampened a little, but this volume drew me back in and got me excited about the story again.

The expressions, comical timing and action shown throughout this volume are fantastic. Despite the fact not that much happens in the overarching story, it’s still a great deal of fun which is perhaps the most important thing. My only criticism is that there is quite a lot of dialogue in places throughout this volume and because Fusemachi draws such small panels, this can sometimes overwhelm the artwork, but it’s by no means a big problem.

Since we’ve just gone through a tournament arc, the next volume of the series is setting up something a bit different with Lloyd taking on a part-time job at a hotel. This gives the cast a chance to relax, but I’m sure it will be filled with a healthy dose of misunderstandings and ridiculous situations that we’ve come to know the manga for.

Suppose a Kid From the Last Dungeon Boonies Moved to a Starter Town Volume 4 comes to the West thanks to Square Enix Manga and has been translated by Andrew Cunningham. The translation reads well with no issues to note. Volume 5 of the series is scheduled for a release in October.

Overall, Volume 4 of Suppose a Kid From the Last Dungeon Boonies Moved to a Starter Town is another fun entry in the series. If you’ve enjoyed your time with the manga so far then this one certainly won’t disappoint you. 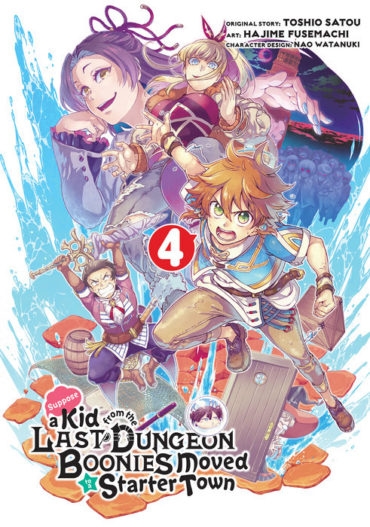