Kororo’s life as she knows it is over: her father’s company is in financial ruin, and the only way to save it is to strike a deal with a very rich young man, who agrees to help on one condition – to marry Kororo as soon as she finishes high school. With one year left until her doom, Kororo decides to spend her last year indulging in her love of women and lesbian romances, sketching art of various ‘couples’ she sees in real life and creating her own stories of their love lives. Amami, her best friend, is happy to help her with her fantasies, but she also has her own desires: to help Kororo out of her engagement!

The series caught my attention from the blurb on the Tokyopop website, and after reading the first volume, I can say that the concept of the series has a lot of potential for comedy and good character interactions. The structure of the manga goes like this: each chapter is told in two parts, the first part is centred on Kororo and Amami in their every day school lives, with Kororo seeing a ‘couple’ in real life (or in some cases, just two people who happen to be sitting next to each other) and basically ‘shipping’ them together. Part 2 is then told from said ‘couples’ point of view, revealing that their relationship is more nuanced than Kororo’s fantasies, with the last bit of the chapter switching to Amami’s POV to progress the overall plot.

There’s tons of room for comedy as Kororo, being a hopeless romantic with a ticking clock counting down to her unhappy marriage, often has fantasies of these random girls that are full of tropes and clichés. Whereas in real life, the people are more complex and, in some cases, have stranger lives than the fictional versions Kororo creates. Especially if Kororo meets up with them again in the future and learns of their real lives, given that her best friend happens to be in love with her, it’s rife with comedic potential. However, real-life shipping is a bit of a touchy subject for some, and Kororo’s enthusiasm has the potential to get annoying or weird if the writer takes it too far, but because of the character’s stress and depression at having to marry someone not in line with her sexuality, and the shipping being her only outlet for her true feelings, it’s understandable and relatable rather than unnerving.

But something is ‘unnerving’ about the series and it’s two minor things that have the potential to be bigger problems later. The first one is the tone in the very early chapters: this might be a case of weirdness early instalment syndrome, but there’s a few instances when the tone switches from high school drama to horror-tinged drama quite quickly. Amami’s love for Kororo is revealed via a room with walls covered in drawings of Kororo (in a very stalkery type of way), we never see the face of Kororo’s fiancé except for one picture Amami draws of him in a very demonic/creepy way, and the tones of the scenes where Amami is plotting (without Kororo’s knowledge) to get her out of the engagement waver between well-intentioned to obsessive. It’s like the writer wasn’t sure how to write Amami or couldn’t decide on the tone of the scenes not around the yuri-stuff. The second thing to note is that all Amami’s schemes and the random couples we follow all have one thing in common – they all lack Kororo’s point of view. From the first volume, we don’t know much about Kororo’s character, except she likes yuri and has an over-active imagination; she’s very removed from Amami’s plans and completely oblivious to her affections. This results in BOTH the faceless fiancé and Amami – and by extension the audience – treating Kororo like she’s a prize to be won. She’s not a real character right now, just a pretty face that the main characters want for themselves. If this is the author’s intention, and if we get a full deep dive into this as well as Kororo’s self-actualisation, then I think that could be a fantastic series, but right now it’s hard to tell this early on the series if it’s just an oversight or laying the groundwork for something bigger.

Mai Naoi is the mangaka here and this is their first series. Overall the art is fine, there’s a clear distinction between real life and Kororo’s fantasies, with flowers framing the appropriate panels. But I sometimes struggled to know which girl was which; there’s a lot of new characters thrown into the mix within the first volume that it was hard to keep up with who knew whom. Translation for Tokyopop’s LGBT Love x Love list is by Caroline Wong; the text reads well, and each main character has a distinct voice which is appreciated, as visually it isn’t always easy to tell.

‘Espoir’ is French for ‘hope’, which is something that I have for this series as it develops. Yuri Espoir has the potential to be good and there’s a few pages and moments I really liked, so overall I would recommend. If you’re interested, it’s available digitally now and physically out in late July from Tokyopop. 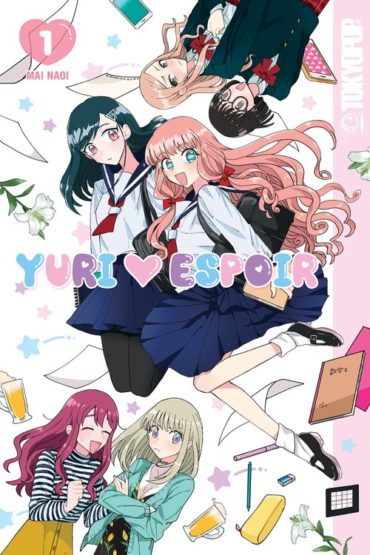