Ever since salaryman Adachi turned thirty, he’s become a wizard! Well, not exactly a Harry Potter-style wizard, but the urban legend that you’ll gain magical powers if you’re still a virgin by your thirtieth birthday has turned out to be true in his case, as he can now hear the thoughts of anyone who touches him. So, when his co-worker Kurosawa, the charismatic star employee of the department, unknowingly reveals that he likes Adachi – really likes him – one thing leads to another and now they’re going out; they’ve even been on a ‘proper’ date together. But Adachi has still not admitted to Kurosawa that he can hear everything he’s thinking whenever he touches him… and he knows that he’s going to have to come clean, sooner rather than later. And there’s always the risk that Kurosawa might be so horrified by the revelation that he ends the relationship. In the meantime, there’s the challenge of what to get Kurosawa for his birthday – and employing a little detective work, aided by his wizardly powers, Adachi is able to present Kurosawa with a new set of headphones. Kurosawa is – of course – delighted. “I’ve just lost my headphones. How did you know?” he asks and Adachi replies, embarrassed, “Uh… I sorta guessed?”

The firm is holding trials of some new strength-training gear and Adachi has asked his novelist friend Tsuge to take part; Tsuge has brought along his younger friend Minato (the dancer who works in delivery) to be part of the ‘fit’ group. Adachi is astonished to learn that Tsuge has – after his thirtieth birthday – acquired the same mind-reading powers; they then discover that wizards have the power to communicate telepathically. This leads to them conversing in a secluded corridor where Tsuge admits to Adachi that he has feelings for Minato. Unfortunately, Kurosawa has followed them and gets entirely the wrong idea. How on earth is Adachi going to explain without also coming clean about his ‘gift’? Is this the end of their brief relationship?

In Cherry Magic! Yuu Toyota has created one of the most likable ‘will they, won’t they?’ couples in recent BL – as is shown by the great success of the live drama TV series and recent film based on her ongoing manga. We’re still way behind the tankoubon releases in Japan (#10 came out earlier this year) but a new volume in English from Square Enix Manga is always very welcome and Volume 5 is no exception. There are several ‘new’ chapters included (the series is still being serialized on Gangan Pixiv) because the physical print editions mean that the mangaka can expand on the original web-based story. It’s good – for Tsuge fans – to see him (and Minato) helping out with Adachi’s work, even if it does lead to a major misunderstanding and some angst on Kurosawa’s part! And there’s the sixth instalment of Tsuge Edition as well.

Not to be over-critical, but there’s no denying that the mangaka’s graphic style, while distinctive, is still oddly gauche, compared with many other BL artists – and yet this also adds to the charm and straightforward way she tells her story. Her art might not be as finely honed as, say, that of Ranmaru Zariya (Coyote) or Natsuki Kizu (Given) but there’s no denying the authenticity of the feelings emanating from her characters or the impact they have on her readers; we’re really rooting for this relationship to work!

Square Enix have produced another very nice trade paperback edition with a colour picture at the front and a ‘sneak peek’ at Volume 6 at the back. The translation is once more by Taylor Engel and reads well; the lettering by Bianca Pistillo deals effectively and clearly with all the different methods of communication taking place from the telepathic conversations between novelist Tsuge and Adachi to Adachi’s more dramatic imaginings, especially when he’s summoned to a meeting with his boss. I’m a little mystified by the M ‘Mature’ rating though, which is really not justified in any way at all – maybe later volumes will contain M-rated scenes but there’s nothing in this volume that merits it.

So there’s much to like in this charming, amusing and sometimes touching story of two salarymen unexpectedly finding love at the office – although there’s a development at the end of the volume that’s going to cause big problems for Adachi and Kurosawa. We’ll just have to wait till January 2023 to find out in Volume 6 what happens next! 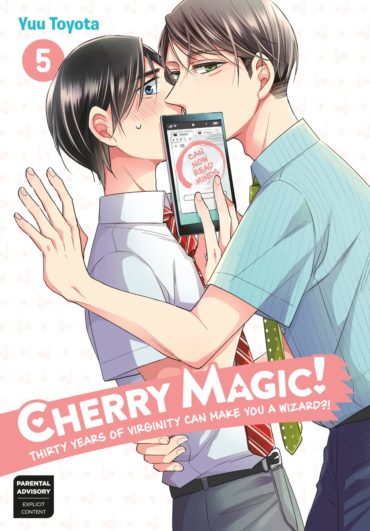 Title
Cherry Magic! Thirty Years of Virginity Can Make You a Wizard?! Volume 5

Soul Eater: The Perfect Edition Volume 1 serves as both a very good introduction to the story and provides a nice incentive for fans to revisit where the story of Soul Eater began.