Mature Content Warning: This book contains explicit content and mature themes, including blackmail, attempted suicide, violence, sex work and non-consensual sex. It is not intended for anyone under 18 years of age.

Salaryman Kei has fallen in love with Momo, a call girl whose sad life story persuades him to pay off all her debts. But taking out a dodgy loan was a really bad idea – and now the loan sharks are after him, reducing him to living in his car. In despair, he decides to end it all – but as he loses consciousness, he sees a man’s face at the window of his car. That’s a warm smile… he thinks muzzily as he blacks out.

When Kei regains consciousness, his arms are bound behind his back. He’s confronted by two shady-looking men. They tell him that Momo’s deceived him and is currently on holiday in Bali and, as he tries to take in the news, offer him the chance to pay off his debt by deep-sea tuna fishing, selling his organs, or – but the explanation of the third option is interrupted. With nowhere else to go, Kei accepts the third option, although he doesn’t quite understand what’s involved at first until he’s whisked away to meet his first client, Mr Maeda, and begins his apprenticeship: something of a baptism of fire. Kei’s been ‘rescued’ by Circus, a brothel that services male clients. Circus is run by the Ringmaster who sports an appropriately splendid moustache and costume to match his nickname. Kei’s fellow debtors are tattooed, gambling-addicted Joe, young and practical Rin (who hopes Kei will help him with the cooking) and attractive, elegant Shiro whom Kei recognizes as the last face he saw before he blacked out in his car. Kei, utterly demoralized now he knows that Momo has not only taken all his money but his self-esteem, resigns himself to this new way of life.

Kei gradually learns more about his three fellow employees and what’s driven them to work in Circus. Kei and Rin are straight (Rin is going out with one of the girls from Quire) but Joe is bi and Shiro seems to be the only one who is overtly gay. However, when Joe goes missing (a not uncommon event, it turns out) Shiro has to ask Kei to help him with a very important client. After that, Kei finds himself inexplicably drawn to Shiro and is curious to know more about him. One day however, when asked to help out with the daily chores at Quire, Kei runs into Momo. Will she recognize him? What will he say to her after all that’s happened to him?

Nemui Asada (My Little Inferno) is one of those rare mangaka who creates stories that stay with the reader long after they’ve closed the book… and in a good way. Her subject matter doesn’t make for easy reading as she puts her characters through some really dark and disturbing situations. So, if you were hoping for a romantic, fluffy BL (like many of Tokyopop’s other BL titles in their Love x Love collection) this one might not appeal to you (and that’s not to denigrate the more overtly romantic titles, either).  Nevertheless, she can find plenty of humour, even in adversity – and genuine emotions of love and friendship surface in a touching and unexpected way. The four men (and the Ringmaster) really look out for one another, even when the going gets tough. The mangaka is not judgmental in any way about Circus, the brothel where the story takes place, nor its customers (or Quire, where Kei met Momo, next door). It just is what it is. Above all, Nemui Asada is good at creating believable characters and making the reader really want to find out what happens to them.

As the mangaka is interested most of all in developing her characters and the sex work that the four men undertake is mostly kept in the background, Loved Circus has practically nothing in the way of visually explicit scenes. However, the manga earns its Mature rating from its very frank depiction of the problems and practicalities of making a living by sex work. Where it shines is in the non-judgmental yet realistic way it shows the clients as well as the Circus employees. “Men come here to reveal their long-hidden fragile sides,” Shiro tells a wide-eyed Kei early on, “and bare their secrets. They entrust themselves to us. It can sometimes be horrifying… gruelling or even foolish. But I still adore each and every one of them. And we grant them a temporary respite. That’s why I love this job. That’s why I hope you come to love this job too.” Yet will his positive attitude ultimately be his undoing?

Another solid translation from Christine Dashiell for Tokyopop captures the mangaka’s sense of humour especially well. Unusually for Tokyopop, there are some noticeable typos in the speech bubbles, especially in the final pages, which hopefully can be corrected for the print edition. The cover art is stylish but uncharacteristically plain for manga: just black and white with ‘Circus’ in sulphurous yellow!

Considering everything that the four central characters go through, Loved Circus is surprisingly upbeat – and by the end, delivers an unexpected yet emotionally satisfying conclusion. This title is not for everyone but it’s one of those rare manga that repay reading several times because of the mangaka’s skill in creating a story peopled by characters you really come to care about.

(This is a review of the e-book; the physical edition will be available in December 2022.) 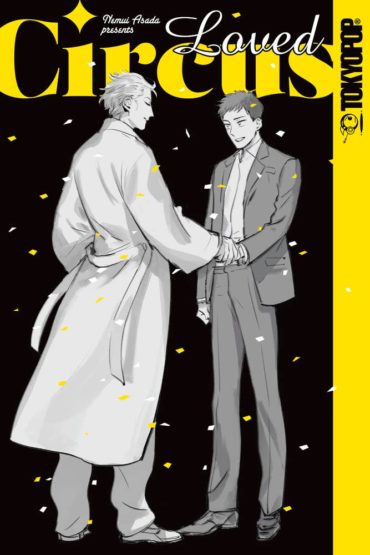 Be My Love, My Lord Review

In a world where beastmen serve and obey humans, what happens when a young man begins to develop feelings for his faithful beastman caretaker?