Volume 2 of Welcome Back, Alice concluded with Yohei and Yui finally getting together. While this should be a happy occasion for the new couple, as is often the case for a work by Shuzo Oshimi the circumstances are complicated and there’s plenty of trouble to come. Let’s find out what’s in store in Volume 3!

Before Yui agreed to date Yohei, she set the rule that, should they go out, Yohei must look only at her and break off his friendship with Kei. Yohei, driven by his desire to be with Yui, readily agrees, but when the two go to school the next day, he finds it’s far more challenging to ignore Kei than he anticipated.

Nevertheless, a month passes without Yohei interacting with Kei and happily spending his days walking to and from school with Yui. However, now that so much time has passed, Yohei wants to move their relationship further than simply holding hands. Despite his best efforts, Yui rebukes him whenever he tries to kiss her or talks about wanting to go further. She tells him not to rush them and that Yohei is being “such a boy”.

A rift begins to form between Yohei and Yui. This is only made worse when Yohei sees Kei being hassled by some thugs one night and steps in to help, which leads to the two sharing a kiss. When Yui finds out the next day, she’s understandably hurt by Yohei’s actions and sets a new plan in motion to keep him away from Kei.

To us readers, it’s clear that the relationship between Yohei and Yui is highly unhealthy, a fact I appreciate that Oshimi doesn’t try to hide. Yui is being manipulative, not just in terms of how their relationship progresses but also by getting between Yohei and Kei. Sure, it might be driven by fear of losing Yohei to Kei but that doesn’t excuse her actions either.

Perhaps the most important thing here is that Yohei also has inklings that what Yui’s doing isn’t right, and I think as time goes on, he will call her out on it rather than remaining trapped. It’s a sensitive topic, but one Oshimi is handling relatively well right now for what it is.

At this point, it would be easy to dismiss Welcome Back, Alice as being melodramatic or shallow, given the way the story has progressed. Especially since it hasn’t particularly developed Kei in this volume, whose circumstances are supposed to be one of the cornerstones of the whole series.

In many ways, this volume feels like a different series where our protagonist is simply a high schooler who’s in way over his head in his first relationship. But Oshimi manages to keep us on track by including Kei enough that we’re reminded that relationship problems aren’t all Yohei has to deal with. The story might be getting more complicated now, but the core love triangle between these three characters is still the driving force. I just hope we get to spend a little more time developing Kei next time around, otherwise his storyline is going to feel like a gimmick which would be a shame.

Welcome Back, Alice Volume 3 comes to the West thanks to Kodansha and continues to be translated by Daniel Koman. The translation reads well with no issues to note. Volume 4 of the series is currently scheduled for an English release in December.

Overall Welcome Back, Alice Volume 3 takes the series in a different direction as it sidelines Kei in favour of exploring Yohei and Yui’s blossoming relationship and the darkness that lurks within. Fans of Oshimi’s work will know more or less what to expect from this development, but it still proves an interesting read all the same. 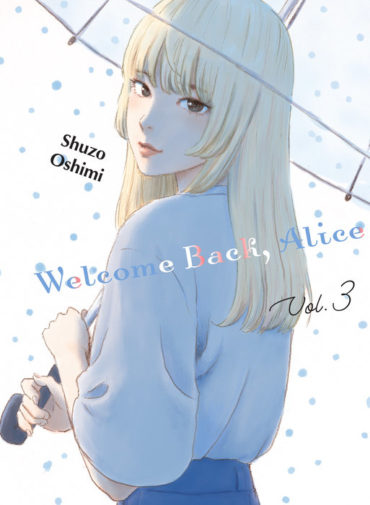 In Volume 2 of Welcome Back, Alice our protagonist continues to struggle with his feelings for his childhood friend but will a favourable change with his love interest help him put his thoughts in order?