This book contains sexual content and is intended for an audience aged 18 years and up.

“A beastman is hardly more than a pet! Don’t imagine you have any right to contradict a human!” Reiji’s father, rounding on Tsubaki.

Reiji Shinozaki is the second son of a wealthy family. As a child he is a given an adorable black-haired beastchild called Tsubaki, who is to be his caretaker – even though he’s two years younger. In this society, beastmen are regarded as second-class citizens, not worthy of an education – but Reiji teaches Tsubaki himself and soon his young student catches up and is able to accompany him to school. Tsubaki’s beastman identity is confirmed by his furry ears and tail which express his feelings (drooping for dejection and disappointment, wagging for enthusiasm and happiness) and help to reinforce the reader’s impression that he’s really a big, faithful dog.

By the time Reiji is a college student, the two are still inseparable but their feelings have deepened, just as societal expectations erect a barrier between them. Tsubaki still calls Reiji ‘Master’. When Tsubaki goes into heat and bares his fangs, one thing inevitably leads to another – but afterward, when Tsubaki happily refers to Reiji as his mate, Reiji is confused. Does Tsubaki understand the difference between being a mate and a lover? Does he have deeper feelings for him – or is it just an animal appetite that needs satisfying from time to time? Tsubaki is deeply confused. To make matters worse, a marriage meeting is set up by Reiji’s father with an eligible and attractive young woman. Tsubaki’s services will no longer be required. Is this the end of Reiji and Tsubaki’s love affair? Will the demands of human society assert themselves over the two young people’s genuine feelings for each other and drive them apart?

Over the last few years, there’s been a gradual increase in the number of Boys’ Love variations on the beast-people trope, from cosy family sagas like Beast’s Storm by Morry Kuroi with humans with ears and tails co-existing with normal humans, via all manner of shapeshifting werecreatures (Coyote by Ranmaru Zariya or Asia Watanabe’s D.S.P Romeo) to the totally furry and superior beasts of Remnant: Jujin Omegaverse by Hana Hasumi, who have subjugated humans to act as their slaves and concubines. These allow for all manner of variations on the master x servant relationship (often translated into dom x sub or nudging into omegaverse territory with alpha x omega and male pregnancy) and spiced up with all the metaphors that ‘bestial lust’ (mentioned in the blurb of this manga) can imply. What’s more attractive in romantic fiction, after all, than being carried away by animalistic, unbridled passion – especially when it can be conveniently explained away by beast genes and an uncontrollable urge to mate? It’s not surprising, therefore, that Be My Love, My Lord wanders into the territory of a nineteenth century romance where the young (human) lord falls in love with his servant (who happens here to be a beastman) – but the demands of his aristocratic family and his role in a repressive, structured society require him to marry a woman of noble birth and produce an heir. While Reiji’s older brother is already married, so the need for heirs is not a pressing one, Reiji’s father just can’t understand why his younger son would want to choose Tsubaki as his life partner, when he’s of a different and lower class.

Cute as this pair of childhood friends are (well, master and servant childhood friends to be accurate) this manga never really moves beyond establishing their sweet and curiously wholesome relationship which – as the Mature rating suggests – includes a number of relatively graphic but consensual sex scenes. The two come up against the dynastic expectations of Reiji’s stern father – but there’s no real danger of a serious family schism as Reiji is the younger son and his brother is already married off. Disappointingly, the problems and societal implications of Reiji and Tsubaki’s inter-race relationship are never fully explored. Their story is imbued with a warm and fuzzy atmosphere which means it’s a good comfort read – but the fact that a whole short story appears at the end (before the two chapters of cute and sexy bonus material) suggests that there could and should have been more. The 32-page short story I Have my Flaws, but Will You Still Love Me? isn’t related to the main manga except when the ‘I’ of the title (a young man whose good looks conceal a needy and short-tempered personality) is occasionally portrayed with cat-like ears and tail (and yes, he is the neko in the nascent relationship, but he isn’t a cat-boy).

Adumi Nagano is a new mangaka (to me) with only three titles to their name so far, all written for a BL magazine I hadn’t come across before: LiQulle (Overlap). I have to admit that I don’t care for the cover art (although the art showing the main pair as children on the rear cover is adorable) as it evokes a Harlequin Romance feel, over-feminising Reiji – although this is a personal preference and other readers may well appreciate it. However, beyond the cover, we find a different and more fully realized portrayal of Reiji – both in the art and the way the story plays out – a Reiji who is quite capable of provoking, then encouraging Tsubaki to get closer to him.

The translation for Tokyopop is by Christine Dashiell and makes for a fluent, enjoyable read. As with most of the other titles in Tokyopop’s LOVE X LOVE range, Be My Love, My Lord is being published in digital first of all, with a print version to follow, in this case in March 2023. 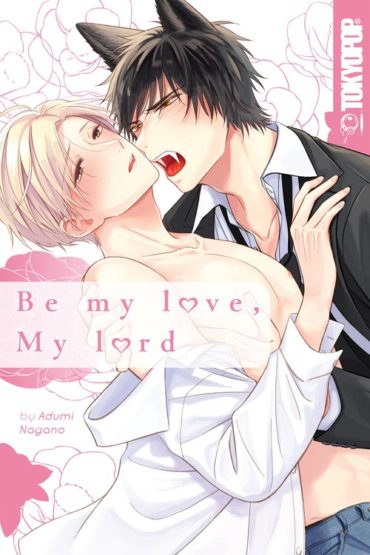 Title
Be My Love, My Lord