Recently there has been something of a surge of historical romance manga making their way into the English market like My Dear Detective: Misuko’s Case Files (available on Azuki), My Happy Marriage (Yen Press/ Square Enix) and One Peace Book’s latest addition – Usotoki Rhetoric. Today I’m here to check out this latest release and find out if it’s a must-have for shojo fans!

The story takes place in Showa 1 (1926 in the Western Calendar) where we meet the protagonist, sixteen-year-old Kanoko Uraba. Kanoko has left her hometown behind after the residents turned against her, due to her ability to ‘hear lies’ and has just reached the town of Tsukumoya when we meet her. Currently homeless and starving, it’s not long before Kanoko collapses but luckily for her, she’s just met detective Iwai Souma who won’t turn a blind eye to those in need.

Souma takes Kanoko to a nearby restaurant where she’s fed a decent meal and Souma’s police detective contact and childhood friend, Hanasaki Kaoru, promises to introduce her to a stable job. Things are beginning to look up for Kanoko, that is until she overhears the restaurant owner’s son, Taro, lying about stealing money. Kanoko can’t help but speak up and tell him not to lie, but with no evidence to prove her claim, she worries that the new friends she’s made will turn their backs on her and brand her a bad omen like those in her hometown.

To make matters worse, the next morning Taro goes missing and it becomes a race against time to find him before anything awful can happen. Kanoko and Souma search together and thanks to Kanoko’s power and Souma’s quick wits as a detective, they manage to rescue him from a dangerous situation. Now Souma believes in Kanoko’s powers and asks her to work as his assistant, but can Kanoko overcome her fears of abandonment?

Usotoki Rhetoric Volume 1 is made up of four chapters, across which we get to see Kanoko and Souma tackle three different mysteries. There’s quite a variety in the cases they take on, including investigating a robbery and a kidnapping. I’ve read five volumes of this in Japanese so far and can say that it continues to offer quite a wide variety of stories as the series goes on, which is important for a title in this genre.

As Souma and Kanoko work together, we get to learn more about Kanoko’s power, and how the intentions behind words spoken can influence whether she hears them as a lie or not. Together, the two work out secret hand signals so Souma can know at a glance if someone is lying or not during their investigations. Of course, we also see glimpses of Kanoko’s past and how these powers proved a problem for her as a child, when she couldn’t understand why no one else could hear the lies and that even revealing that someone is lying can cause problems in relationships and hurt people’s feelings.

The series ran in Bessatsu Hana to Yume, but despite being in the popular shojo magazine, it’s not big on the romance side of things. It’s obvious that Kanoko is developing some feelings for Souma, particularly since he treats her so well and believes in her, but it’s clear that the series isn’t particularly interested in dealing with the romance side of things just yet, so readers hoping for that may be disappointed.

The mangaka behind the series is Ritsu Miyako, who has a couple of other series to her name in Japanese, but this is her English debut. The artwork side of things is great, with detailed backgrounds and attractive character designs. In sidebar notes throughout the manga, Miyako talks about how she spent a lot of time researching kimonos to make them accurate to the era and how troublesome that proved. She also looked into popular hairstyles in the era (although she admits she chose what she thought looked best in the end, regardless of accuracy). You can tell how much care and attention has gone into the setting. I also appreciate that all the speech bubbles containing lies have a uniquely patterned background, so it’s easy for readers to tell at a glance who’s not revealing the truth in a given scene.

Miyako isn’t afraid to have some fun with the art either, as she often transforms her cast into chibi versions of themselves for smaller panels where they might be bickering about something or other. This only enhances the variety of personalities the cast offers, particularly Souma who is clearly a very talented individual but can often be found wailing about being poor/starving/tired. He’s surely a handful for Kanoko and Kaoru, but he’s lovable all the same, thanks to the earnest and caring side of his personality. If an anime is ever made I hope they put Mamoru Miyano in Souma’s role; he would be a perfect fit and I find myself reading all of Souma’s dialogue in his voice already…

As previously mentioned, Usotoki Rhetoric Volume 1 comes to the West thanks to One Peace Books and has been translated by Molly Rabbitt. The translation reads well and the lettering (which goes uncredited), is also largely problem free.

There are a few scenes where the text doesn’t fit in speech bubbles, which a slight redraw would have fixed. I also noticed some sign translation being stuck above or below the sign in question, which would have been better in translation notes at the back of the book or in-between panels, particularly when it’s not critical to readers’ understanding of a given scene. Admittedly this bugs me perhaps more than it normally would because I have these problems a lot with releases put out by One Peace Books so it’s always disappointing to find that they’re still not improving in that regard, despite criticism from fans and other reviews outlets alike.

The series is complete in Japan at ten volumes, having run between 2012 and 2018. In English, One Peace Books has Volume 2 scheduled for release in February, with Volume 3 following in June 2023.

Overall, Usotoki Rhetoric is a combination of interesting mysteries and heartfelt character development in a time period we don’t see a lot of in the English market. While it may not be heavy on the romance side of things and have a few small quality issues, readers will still find themselves rooting for Kanoko and Souma as they solve cases together. A highly recommended read if you’re taken by the premise! 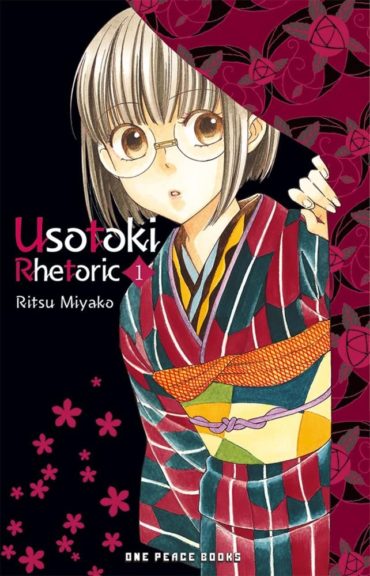