Before announcing the launch of Ize Press this autumn, the imprint of Yen Press focusing only on Korean manwha, Yen Press picked up a few Korean webtoons. Among these, there is Daughter of the Emperor, which the manga publisher will continue to publish as a Yen Press title.

“I detest you, Emperor! My body and blood will never forgive you. Even when my body perishes, a child of my blood will curse you instead.”

Ariadna is the new-born princess of the Agrigent Empire, the only daughter of the mad and bloodthirsty Emperor Caitel. She was originally a Korean woman, who was killed and then reincarnated into a fantasy world resembling Europe in the 1800s in terms of architecture and Medieval Europe in terms of fashion.

Ariadna is only a few weeks old when she realises what’s going on, thanks to memories of her previous life. She knows that her father is a psychopath, and she’ll do whatever she can not to be killed in this world too. But first she needs to learn how to walk, talk and eat all by herself. In this new life, where her father considers her a bug and her mother has passed away, she is in the care of Serira, a nanny, and the maid, Elena.

However, there might be more than meets the eye to Caitel. In fact, he keeps appearing in Ariadna’s rooms to play with her and even sentencing one of the concubines to death because she made Ariadna cry. And when the little princess’ life is in danger, he swoops in to save her. There are a lot of mysteries surrounding Caitel, and Ariadna can’t help but be curious, especially when a mysterious man seems to banter with the emperor without worrying about his life. Who is this man who has magic and can turn himself invisible?

If surviving wasn’t enough for Ariadna, she also has to deal with the curse that her mother pronounced on the emperor, that undoubtedly involves Ariadna too. She’s in for a wild ride.

Daughter of the Emperor has everything that you would expect in an isekai manwha. A heroine from modern-day Korea waking up as a character in a fantasy world where she takes it by storm. Well, the preamble of the story is there, but it seems like we’ll get to the “storm” part pretty slowly as Volume 1 sees Ariadna still younger than a year old.

The relationship between Caitel and Ariadna is weird. He’s like a killing machine with no emotion, but Ariadna might change that. With her, Caitel appears to be softer, which leads me to borrow a Japanese word to describe him—tsundere. He shows her his softer side, but that might be due to him thinking that she can’t understand it nor noticing the difference. After all, who could possibly know that a few-months-old child has the mind of an adult?

There is not much action in the story, with the settings repeating from Ariadna’s room to Caitel’s office and to his room. Ariadna’s job is to develop a relationship with her father so that he won’t kill nor sell her (at least we hope he won’t). The slow storytelling is also due to the narrative that has a lot of inside thoughts more than dialogue windows, that at times make the reader think “get to the point”.

The manwha reads from left to right like a Western book and is in full colour. The illustrations resemble a manga style, and the colours are muted. The cover is simple but effective. Printed on matte paper, it has a nice finishing touch: spot UV (the shiny parts) over the cover illustrations, both front and back.

Daughter of the Emperor is written by Yunsul and illustrated by Rino. The manwha was originally published by Webtoon, and it’s been translated into the English language for Yen Press by Micah Kim. Volume 2 is already available in bookstores. 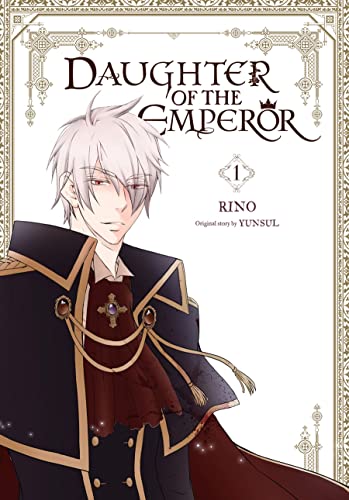 Title
Daughter of the Emperor Volume 1