“I’ve never been that girl who gets carried when she falls during sports day. And I’m not the kind to give out chocolates on Valentine’s Day. A tall, lanky physique with a rather low voice, and a masculine face inherited from my parents. I’m painfully aware that I’m more hero than heroine. I shouldn’t hope for that to change.” – Yoi Yakiguchi, In the Clear Moonlit Dusk Chapter 1.

Earlier this month, I reviewed Mika Yamamori’s Tsubaki-chou Lonely Planet Volume 1 from Yen Press. Today I’m here to check out her current ongoing series, In the Clear Moonlit Dusk which makes its way to print thanks to Kodansha. Does it prove an interesting read? Let’s find out!

Our story follows high school student Yoi Yakiguchi who’s known by her fellow students by the nickname “prince” thanks to her long legs and masculine face. Because of this, Yoi spends her days being swarmed by classmates who find her attractive and those who admire her from afar; no matter where she goes, she’s the centre of attention and a source of gossip.

However, Yoi isn’t the only one known as a prince at her school. There’s also Ichimura, an upperclassman famous for his good looks and wealthy family. Although Yoi can’t help but wonder if the rumours about him are exaggerated when they talk about him being entrusted with companies and having made hundreds of girls cry already!

One afternoon, Ichimura bumps into Yoi in the stairwell and knocks her over. To start with, Ichimura makes the same mistake as everyone else and assumes Yoi’s male, which ticks her off after he’s called her beautiful. Afterwards, Ichimura’s assumption is corrected by one of his classmates and he finds himself horrified that he said such a thing to her. He vows to make amends and finds himself oddly fascinated by Yoi the more he learns about her. Could love be about to blossom between this unlikely pair?

In the Clear Moonlit Dusk is a shojo series, so of course, there are sparks between Yoi and Ichimura. But having said that, it’s not going to be easy for Ichimura since Yoi has never had the chance to get close to a boy before nor even thought about dating anyone. Nevertheless, his advances begin to break down the mental wall Yoi’s built to keep everyone but her two close friends at bay.

For Yoi’s part, she can’t understand why Ichimura would pay her any attention, nor does she understand the feelings she’s beginning to have for him. Having lived her life forever as someone adored by her classmates and not the heroine of her own story, she can’t fathom why that would suddenly change. She’s waited her whole life for someone to tell her she’s beautiful as a woman and not the male persona everyone attaches to her.

Mangaka Mika Yamamori is quickly becoming one of my favourites in the shojo genre. Both Daytime Shooting Star and Tsubaki-chou Lonely Planet have female protagonists who aren’t overly girly, which is something I can better connect with on a personal level. And I truly admire the decision this time around to have a more androgynous character lead the story, since it gives women better representation and, as Ichimura tells Yoi, there is nothing wrong with her being princely instead of girly as long as she’s happy. Both our lead characters are misunderstood and that’s okay because Yamamori is determined to show us that no matter your appearance or way of life, there is someone out there who will love you for exactly who you are.

There will certainly be readers who resonate with the message Yamamori is conveying here and even if that doesn’t matter to you, this is a thoughtful shojo with lovely artwork that’s sure to draw your eye. Yamamori’s trademark style is a focus on character expressions with a willingness to change their appearances to slightly more chibi forms for comedic scenes, which works well here. The two main characters’ designs are also a strong selling point as both are quite attractive and contrast well with one another. Yoi is portrayed with a believably androgynous design, while Ichimura is more like a playboy delinquent (complete with an earring), which fits the rumours surrounding him at school.

In the Clear Moonlit Dusk Volume 1 comes to the West thanks to Kodansha where it has been translated by Jessica Latherow with lettering by Lys Blakeslee. The translation and lettering read well, with no complaints to be had with either of them. This release comes complete with a colour opening page as well as some translation notes in the back of the book, although these are mostly concerning some small references rather than anything notable.

The series is ongoing in Japan with four volumes, Kodansha has released three of these digitally so far and Volume 2 is scheduled for a physical release in January with #3 following in March. The paperback release is in one of Kodansha’s larger formats, which the art benefits from, so I highly recommend checking that out over the digital version.

Overall, In the Clear Moonlit Dusk Volume 1 offers a thoughtful romance about a heroine who simply wants to be seen for who she really is. This one is sure to resonate well with its audience and I for one can’t wait to see more of the characters’ story as time goes on. A highly recommended read for fans of the genre.

A free preview for Volume 1 can be read on Kodansha’s website here. 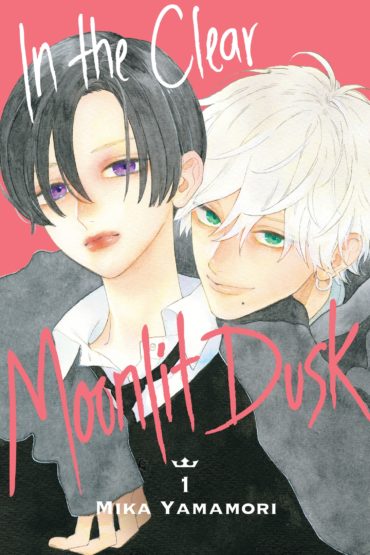