Readers may already be familiar with author Keishi Ayasato thanks to the Mythical Beast Investigator manga or light novel series Torture Princess which Yen Press has just finished releasing. Ayasato is known for crafting fantasy works with intriguing settings and emotionally driven storylines, but does that extend to the new series The Bride of Demise? Let’s find out…

Our story is set on an Earth that is overrun by mysterious beings known as Kihei who threaten humanity’s very existence. Protagonist Kou Kaguro is an orphan attending Twilight Academy, which trains students as soldiers to fight against the Kihei. The school is split into different departments covering Combat, Defense, Medicine, Architecture and the department Kou’s in – Magic Research. Combat and Defense are known for being high-risk, given that the members tend to fight against Kihei often, whereas Magic Research is relatively safer.

Nevertheless, every group runs the risk of running into Kihei while on a mission and as luck would have it, when out on a routine expedition, Kou’s team comes across a powerful Special Grade Kihei that threatens to kill everyone. Deciding it’s better to sacrifice himself to save everyone else, Kou distracts the Kihei and runs into some nearby ruins where he tumbles through the floor and finds himself coming face to face with a mysterious girl called White Princess. Although he’s never met her before, their meeting feels like it fills a hole in Kou’s heart, and he senses she will be an irreplaceable companion…

As it turns out, White Princess is also a Kihei, but she’s a “Bride”, a special Kihei who will work with a human partner. When Kou eventually makes it back to the academy, he’s transferred to a new class, one filled with people like him who have a Kihei bride by their side. Spurred on by love and wanting to live a peaceful life with their beloved, these students fight together with their brides against the Kihei in the hopes of stopping their advances.

White Princess is a powerful Kihei, but Kou being a part of the Magic Research department has never learnt how to fight particularly well. Now in this specialised class, he’ll be facing off against Kihei more regularly which means his life is in more danger than ever before. So Kou begins training with White Princess by his side, but he has this nagging feeling he’s known her far longer than he should have. Why is that? Well, you’ll have to find out for yourself, but trust me the answer is well worth finding out.

On the surface, The Bride of Demise may sound like another magic academy series, but to put it under that umbrella would be doing a disservice to Ayasato’s abilities as a writer. Yes, the setting might be a school, but there is far more to it that slowly unravels over the course of the book, both rewarding the reader for continuing and urging them to reach the end to take in the grand majesty of the story being crafted.

Having almost finished Ayasato’s Torture Princess series, I knew more or less what to expect here. This book has a similar structure where an unsuspecting protagonist is thrown headfirst into a situation he’s ill-prepared for. As usual, where Ayasato’s writing truly excels is in the world-building and the emotional bonds among the cast. Kou and White Princess’ relationship, for example, is an integral part of the plot and it proves to be both believable and easy to root for. Kou’s other classmates all have their own stories which are slowly revealed as the book goes on and he becomes closer to them.

The setting is on the darker side for light novels like this, particularly with humanity being backed into a corner by the Kihei and the knowledge that most students are killed before they can graduate. But The Bride of Demise never feels overly depressing, perhaps thanks to the sprinkle of comedy and a dim glow of hope that Ayasato provides. Certainly, if you read the synopsis for any of his books, you’d think they make for grim reading, but that’s not necessarily the case and this is certainly one you shouldn’t judge by its cover.

The Bride of Demise comes to the West thanks to Yen Press where it has been translated by Jordan Taylor. The translation reads smoothly with no issues to note. This release includes several colour pages at the beginning, illustrated by Karuki Mura, which showcase Kou and all of his classmates in full as well as capturing one of the battle scenes from later in the book. While I’m not a huge fan of the character designs since they’re all a bit unnaturally tall and lanky, I do like the colour palette Mura chose which does a good job of setting the tone for the story.

The series is completed in Japan at three volumes, of which Volume 2 is already available in English and Volume 3 is scheduled for February. Usually, I would be wary that such a short series was quietly axed, but Ayasato wrote all of Torture Princess in arcs of three books apiece so it’s entirely possible that this one did just finish up within three and even if it wasn’t planned to end there, it should still be satisfying.

Overall, both fans of Keishi Ayasato’s work and newcomers should immediately snap this one up, no questions asked. It may look like a fairly average fantasy fare, but there’s a lot of depth with plenty of twists and turns you won’t anticipate. 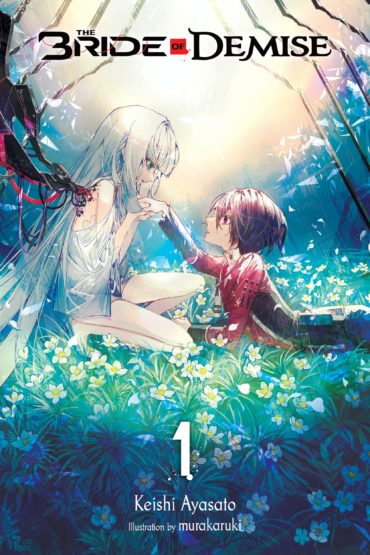 Title
The Bride of Demise Volume 1