An arranged marriage – a marriage of convenience – arranged by parents to bring two families together, with political, dynastic, business or similar societal motives behind the contract has been a favourite fictional plot over many years. But the twenty-first century wedding that we see at the start of I Want to Be a Wall is very ‘modern’ in that the bride and groom are not in any way romantically involved, nor are they ever likely to be; the best they can hope for is that they will be life partners, companions living together but never sharing a bed. This is because Yuriko describes herself as asexual and ‘incapable of romantic attraction’ and her new husband, Gakurouta, is gay and still crushing on his childhood friend, Sousuke. As they try to force a smile for the wedding photographer (both are painfully shy) we wonder what’s led up to this moment. Cut to the couple moving into their new home, and the removal men unpacking boxes and boxes of books. This is Yuriko’s precious collection of Boys’ Love manga. Curiously, her new – gay – husband seems to be utterly oblivious when it comes to BL and she’s eager for him to stay that way. But as his childhood friend Sousuke arrives to offer his congratulations, she recognizes that she’s now party to and part of a one-sided real life BL relationship. “Even if I have to keep my feelings hidden,” Gakuratou tells Yuriko later, “I’ll stay by his side as his childhood friend. From here on out… even if nothing ever comes of it, I’ll continue to love Sousuke.”

The usual ‘newly married couple cohabiting for the first time’ situations are explored: shopping for two; cooking for two, with the inevitable experiments and charred disasters that tend to arise when neither of the pair are used to cooking, and it’s very charmingly portrayed. Gakurouta has even bought a book entitled 800 Steps to be the Perfect Husband which he’s been studying.

Then in Chapter 5, the focus switches to Gakurouta’s point-of-view as he tells the readers how he feels about Sousuke and how their friendship has somehow weathered Sousuke’s many girlfriends (one can’t help wondering why Sousuke, a professional gardener, hasn’t yet settled down). Then we see more of Yuriko’s school life, her long friendship with Ume-chan, their joint passion for BL – and how the two of them grew away from each other at university when Ume became much more interested in her appearance, partying and meeting boys.

I Want to Be a Wall is good at showing us what it means to be a young woman in Japan, feeling pressure to conform to societal norms and get married – and then even more pressure from doting parents, to give them grandchildren. But it doesn’t yet reveal to us exactly how the two protagonists met and decided to commit to a partnership that would be for their ‘convenience’. And I feel even a chapter would have helped at this stage; hitting the ground running makes for a dramatic opening but it’s telling the story the wrong way round.

There are several ways to read this first volume and the least complicated one is to take the situation at face value and applaud mangaka Honami Shirono for portraying an ace/asexual female character. After all, ace/aromantic people, the A in LGBTQIA+, are still greatly underrepresented in contemporary fiction. But so many ‘hang on a mo!’ issues arose for me on reading and then re-reading this manga that I couldn’t ignore them. So, I apologise to readers who love this unquestioningly, but I can’t just happily accept the concept because the sheer practicalities of making such an arrangement work keep arising. These two do indeed make a charming couple but I have so many questions about their futures that I hardly know where to start! If Sousuke were to undergo the ‘gay for you’ change of heart trope so beloved of some BL writers and sweep Gakurouta off his feet, would Yuriko really be happy to stand by and cheer them on? Surely, the two men would be the ones to get married? (Interesting that Yen Press has also published the fascinating and moving Until I Meet My Husband by Ryousuke Nanasaki based on his own experiences as one of the first gay men to marry his partner in a religiously-recognized ceremony in Japan.) And, without going into unnecessary detail, what of Gakurouta’s sexual urges/needs? He’s a grown man. How’s that going to work out now the couple are living together? I don’t want this to sound prurient but surely, it’s a genuine issue as he’s not the one saying he’s asexual. Even if his new wife is certain that she doesn’t feel any kind of sexual or romantic desire for anyone, she nevertheless seems very happy to cheer on her OTPs in the BL manga and novels she reads. What I like about BL, she comes to realize, is that the characters are men. There’s no girls like the protagonists of shoujo manga or the heroines of shounen manga… I can pretend like I don’t feel out of place… It’s another “safe space” for me.

Following through on this, the mangaka includes more than one ‘amusing’ scene in which Gakurouta shows a real interest in BL manga or a BL novel and each time, Yuriko snatches it away from him – and shock, horror! when he asks her about an Omegaverse title, she’s horribly embarrassed. It’s almost a kind of ‘you don’t need to worry your pretty little head about that, my dear!’ role reversal and it honestly doesn’t sit well with me. I also find it hard to believe that he wouldn’t know anything at all about BL as a genre, so it’s a relief when he goes into a bookstore and buys his own. If the implication is that they’ll eventually bond over a mutual love of BL manga and novels, I’m not too sure about that, given that Yuriko is portrayed as unwilling to share or mortified when questioned about various BL tropes/genres, such as Omegaverse (which isn’t exclusively BL anyway).

This Yen Press trade paperback edition is ably translated by Emma Schumacker with lettering by Alexis Eckerman. There are two pages of helpful translation notes at the end, explaining terms like OTP, doujinshi event and allusions to popular series like Prince of Table Tennis. This seems to be Honami Shirono’s second published manga series and her graphic style is attractive and easy to follow within the individual chapters.

I don’t usually quote from publisher’s blurbs, especially when the volume concerned hasn’t yet been published, but my feeling that we needed much more backstory in this volume is obviously going to be addressed in Volume 2 (due out January 2023). Perhaps my concerns will be laid to rest when I’ve read the next chapters:

Any good love story starts at the beginning: Where and how did the lovebirds meet? Was it love at first sight? And most importantly, was there a spark? For Yuriko and Gakurouta, their initial meeting was nothing to write home about—after all, matchmaking services aren’t unheard of. But a chance second encounter on the street revealed that as an asexual woman and gay man, they might have much more in common than they initially assumed. And in that moment, they felt not a spark but something better: the seed of a friendship, ready to take root and bloom. 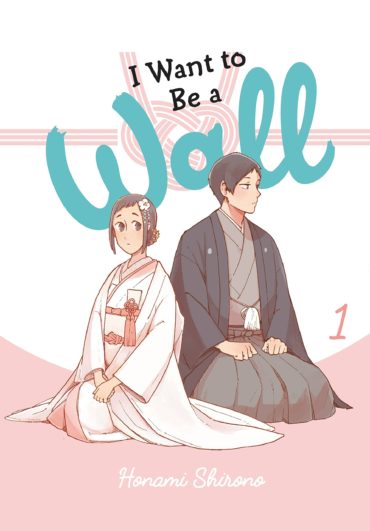 Title
I Want to Be a Wall Volume 1

I Want to Be a Wall Volume 2 Review

How is marriage working out for platonic couple Gakurouta and Yuriko? Perhaps a ‘pilgrimage’ to Kochi will bring them closer together… except it’s only on the plane that Yuriko learns that Gakurouta’s never travelled by air before.