On Ente Isla, the Hero leads the forces of good against the terrifying leader of the forces of the night, Demon King Satan, and his generals Lucifer, Alciel, Adramelech, and Malacoda. Fires and bolts of magical lightning rend the darkness; all is chaos and destruction, as Satan is defeated and drawn through a magical gate into another world…

…which just happens to be Tokyo in the twenty-first century. Cue two very confused devils, Satan and General Alciel, transformed by the portal into young mortal men, then arrested (of course) by the local police. We then see them trying to adapt to living in contemporary Japan without (mostly) their demonic powers. Sadao Maou/Satan gets a part-time job in his local ‘MgRonalds’ burger joint while loyal Shiro Ashiya /Alciel stays at home to do the cooking and cleaning. And all seems to be going quite well until they encounter their old enemy, the demon-slaying Hero Emilia, who has followed them through the gate – and, having lost her powers as well, has had to get a job at a call centre as Emi Yusa. She hasn’t lost any of her burning hatred for Satan, however, and has a few choice things to say to her old enemy…

…except that Maou is rather enjoying his time on Earth. He is highly motivated to become a model employee at MgRonalds and has a staunch ally in cute co-worker and highschooler Chiho Sasaki who has a massive crush on him. But when a series of unusual and localised earthquakes start causing problems for Maou and Emi, the Devil reveals a wholly different side of his nature, summoning enough demonic strength to save innocent bystanders trapped by falling masonry. Who is targeting Maou? Can the Devil redeem himself by these noble acts? Emi is utterly confused. But before she can work out how she really feels about Maou, other demons and allies from Ente Isla begin to make their presence on earth known – and they are all after Satan. Old enemies may be forced to become allies to protect the unsuspecting citizens of Tokyo.

Some anime series that mix fantasy and contemporary life don’t quite convince, but every now and then, along comes one that creates just the right blend of craziness, humour and drama – not to mention sympathetic characters – to make a little comedic gem. The Devil is a Part-Timer! may be only thirteen episodes long, but it is one of the most diverting – and even touching – comedy/action series to be issued on R2 in quite a while. This is down to some nifty and skilful writing, and a light touch with the humour, while still managing to create enough tension to keep us on the edge of our seats. It even gets us rooting for Satan!

The Devil. Satan. Lucifer. These names probably/certainly have much darker associations for those raised in the Christian/Hebraic tradition and even though the Hero fights for the Church on Ente Isla with a sacred sword, it becomes clear as the story unfolds that the forces of good in this ‘other world’ are just as likely to commit atrocities as their demonic opponents and that the warriors on both sides have both destroyed lives in the name of their ‘just’ cause. So even though Sadao Maou is shown with horns and burning red eyes in his original form, this Satan has more of the feel of an akuma or youkai from Japanese mythology than the horned and tailed embodiment of all that is evil. It could be argued that the devils’ transformation to mortal bodies when passing through the portal alters their characters as well… but it’s probably best not to analyze the series, based on the light novels by Satoshi Wagahara, in too much depth and just to sit back and enjoy the show! Another plus is the inclusion of nice little satirical touches about modern life, as when a rival fast-food store, SFC (Sentucky Fried Chicken) opens up across the street.

The US script by Jamie Marchi is ingenious and slick – and if you’re wondering how the Ente Isla language works (all the opening scenes set in the other world are subtitled – and, yes, it does sound a little as if it’s East European in origin) there’s some information in the first Commentary for Episode 1 and an intriguing explanation from the scriptwriter herself. The US cast acquit themselves well, especially Josh Grelle as the Devil himself and Anthony Bowling as the long-suffering Ashiya. Newcomer Felicia Angelle makes a feisty Hero, nicely balanced by Tia Ballard as passionate but ditsy Chiho. But if you prefer the original Japanese cast, Ryota Ohsaka gives us a truly noble-sounding Devil, opposite Nao Touyama as an extremely cute Chiho.

Soundtrack honours go to composer Ryosuke Nakanishi (Love Stage!! High School DxD) who expertly manages the shifts in style between evoking the terrifying battles waged between the angels and devils from Ente Isla and the everyday world of contemporary suburban Tokyo.

The Opening Theme is “ZERO!!” by Minami Kuribayashi which also appears as the Ending Theme in Episode 2. The main Ending Theme is “Tsuki Hana” by nano.RIPE which celebrates Chi in several moe poses (just the one shot for the first episodes, but later episodes earn a short and rather cute animation. Episode 13 has “Tsumabiku Hitori”, also by nano.RIPE, to a longer ‘winding things up’ animation.

Extras include two commentaries, the US trailer, Jamie Marchi’s talk about the Ente Isla language and textless Opening and Ending Themes.

This is probably the most entertaining and amusing new show to be released by Manga Entertainment this autumn and comes highly recommended. 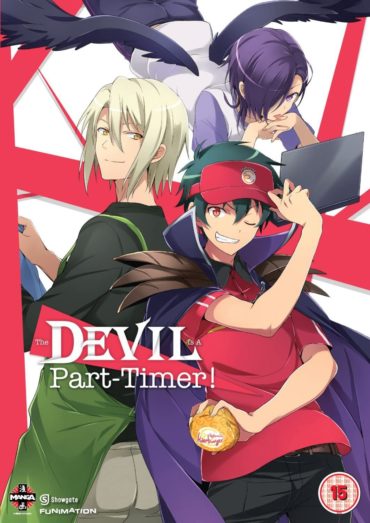 Title
The Devil Is a Part-Timer!

“I am a member of a magic circle – The Secret Six – which is so secret I don’t know the other five.” – Tommy Cooper. This fourth collection of episodes is currently the last scheduled batch of editions to be released by Manga and Funimation. It is something of a shame if they do … Continued

“The universe is full of magical things, patiently waiting for our wits to grow sharper.” – Eden Phillpotts A new collection in the Fairy Tail series has been released, with twelve more episodes of magical fun released in what is the first collection of new material in over a year. The first few episodes in this section … Continued

“I want to destroy the passer-by. I want to be anarchy.” – Sex Pistols This sixth collection of episodes in the fantasy shonen series concludes the Oracion Seis arc, as well as delivering another new separate story. In the previous collection, several wizard guilds were battling against six dark wizards who were planning to revive … Continued

This review may contain spoilers. “When magic becomes scientific fact we refer to it as medicine or astronomy.” – Anton Lavey In this eighth part of Fairy Tail we witness the conclusion of the “Edolas” storyline, which in my opinion has been the best arc in this anime so far. The characters, the ideas, and … Continued

The ‘magical girlfriend’ genre of anime and manga has been a staple for some time. Ever since Rumiko Takahashi’s classic Urusei Yatsura popularised the type, generations of unsuspecting layabouts have found themselves cohabiting with a gorgeous girl with magical powers. One of the best known examples of this genre is Ah! My Goddess. Starting with … Continued