‘The time is out of joint. O cursed spite, that ever I was born to set it right.” Hamlet, William Shakespeare.

Mahiro’s younger sister Aika was murdered a year ago – and since then Mahiro has been skipping high school, bent on revenge. His classmate Yoshino (who was in a secret relationship with Aika) goes to visit her grave, only to held at gunpoint by a glamorous young woman, Fraulein Evangeline (who may be working for the government) demanding to know where Mahiro is. Mahiro comes to Yoshino’s rescue – and, just in time, the two young men escape, only to witness the horrifying effects of the Iron Plague which is turning everyone to metal. Mahiro shows Yoshino a strange wooden doll through which he’s able to communicate with a young woman mage, Hakaze Kusaribe, so powerful that her mage clan has marooned her on a desert island. She is the protector of the Tree of Genesis, and has promised to help Mahiro find Aika’s murderer, gifting him with magic talismans – if he, in turn, will help her stop her brother Samon from reviving the Tree of Exodus and bringing destruction to the world. But Samon’s clan mages wield some very powerful magic – and they will do anything to stop Mahiro and Yoshino bringing Hakaze back.

Episode 12 ends on a note of high melodrama with the whole world at the mercy of the battle for supremacy between the Tree of Genesis and the Tree of Exodus. So the abrupt change of tone when we launch into Part 2 of the series comes as something of a surprise. Suddenly it seems as if we’re in a slice-of-life shoujo romcom with Hakaze, the Princess of Genesis, blushing like a schoolgirl over her crush on Yoshino. Hanemura, the new Mage of Exodus, is portrayed as a bit of a klutz at first – then the super sentai-style uniform he’s persuaded to adopt in his role of mage of Exodus takes us into yet another genre altogether. But, to be fair to the creative team, the second set of episodes works much better than the first – as long as you don’t ask too many questions and just sit back and enjoy the ride. This is because the plot issues are mostly resolved in the final episode (and how many anime series can you say that about?) leading to something approaching a satisfying ending.

By far the most interesting aspect of this story is the uncomfortable ‘friendship’ between Mahiro, Aika and Yoshino; Mahiro must never know that Aika and Yoshino have been secretly going out together behind his back… because Mahiro (in spite of all his protestations) is also attracted to his sister (who is not, as it turns out, related to him by blood, so that’s all right; no incest here, folks!) And yet Yoshino is the only one who has been there for Mahiro – the arrogant, outwardly self-sufficient rich boy – since the boys were in middle grade. This potentially poisonous and complex triangular relationship is frankly rather more compelling than all the ‘end of the world’ gallimaufry.

Why does Blast of Tempest, inspired by the Shakespeare’s play The Tempest, start with a quotation from Hamlet? And then continue (mostly) to quote from Hamlet? Well, the series is based on the manga Civilisation Blaster by Kyo Shirodaira (with art by Ren Saizaki) and Shirodaira is the author of that famously plot-twisty series Spiral.  At first the only element borrowed from The Tempest is the idea of the powerful magician cast adrift by a sibling and washed up on a desert island. But where Shakespeare’s mage is Prospero, Duke of Milan, his role of duke usurped by his villainous brother, here we have a young ‘princess’ mage, the most powerful of the Kusaribe clan, who is put in a barrel and set adrift on the ocean by her brother Samon. Later on we learn that Aika loved to quote from that play – and some (slightly clumsy) analogies come up relating to native islander/monster Caliban and his role in the play. But the parallels between the trio of brother (Mahiro), sister (Aika) and lover (Yoshino) and Laertes, Ophelia and Hamlet are quoted just as often and, arguably, are more apt. Is the outcome going to be a revenge tragedy (Hamlet) or a revenge/reconciliation (The Tempest)? At the end there is a final (and fitting) link to The Tempest… but you’ll have to watch it to discover what exactly that turns out to be.

Another intriguing (or baffling, depending on your point of view) issue is that of the music. Michiru Oshima (FullMetal Alchemist, Patema Inverted, Hal) is responsible for the fully orchestral soundtrack. This is both a bonus (she’s an accomplished composer) and a disadvantage (there’s sometimes so much going on in the orchestral score that it overwhelms the action.) Particularly affecting is the poignant theme that accompanies the preview at the end of every episode; this is Oshima at her best. But what’s this I hear? Something rather more ‘classical’? Why, it’s the third movement from Beethoven’s piano sonata ‘The Tempest,’ orchestrated, no doubt, by Oshima herself and inserted, perhaps, to remind us of the (thus far pretty tenuous) links to Shakespeare’s play.

The Opening Theme “Spirit Inspiration” by Nothing’s Carved in Stone is suitably loud, jangled and brash – with English lyrics.  But, for a show with such heavy emotional content (murdered sister, lost lover, family betrayal, the imminent end of the world…) what on earth is this cutesy little Ending Theme “happy endings” by Kana Hanazawa (who plays Aika) doing? It seems utterly out of place. The second Opening Theme is “Daisuki na noni (Even though I love you)” by Kylee with animation based on the attractive manga artwork by Ren Saizaki. The second Ending Theme is “Bokutachi no Uta (Our Song)” by Sako Tomohisa where the animation portrays the doomed lovers Aika and Yoshino, walking along as the seasons change.

As this release is subbed, we are treated to the original seiyuu, and very good they are, too, especially young male leads Kouki Uchiyama as Yoshino and Toshiyuki Toyonaga as Mahiro. The subtitles are so-so in quality, leaving something to be desired in the long passages of talky exposition (but then, that’s more of a complaint for the script writers who obviously forgot the old rule: ‘Show, don’t tell.’)

Blast of Tempest is a very attractive series from a visual point of view with elegant character designs (the long hair of Fraulein Evangeline, Aika, Hakaze and her brother Samon is romantically Art Nouveau in the way it billows, and drifts in long strands across the screen). The mage duels are thrillingly orchestrated. The destructive powers of the Tree of Exodus and the Tree of Genesis are chillingly portrayed. But its strengths lie in the personal interactions of the main characters; when Hakaze tells Yoshino he should grieve properly for Aika, or when Mahiro and Yoshino are arguing, the series comes alive. 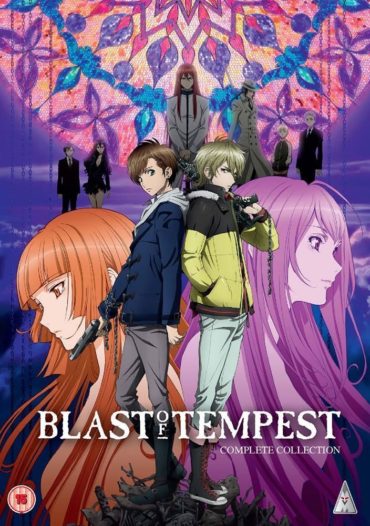