Circus has rescued young Nai’s friend and protector Karoku from the clutches of the sinister organization Kafka at the Smokey Mansion – but to Nai’s distress, Karoku doesn’t recognize him. It seems that Kafka have been tampering with Karoku’s mind and memories, although no one at Circus is sure how to restore him. Gareki begins his new life as a student at Chronome Academy, sponsored by Captain Hirato. When Nai and Karoku manage to activate the old Circus ID bracelet, Gareki hears Nai crying out for help. Forbidden to leave the academy on pain of expulsion, Gareki finds himself suddenly transported far away. Has he been summoned by Nai – and, if so, can he find him in time before something terrible occurs? Whatever happens, his future prospects at the academy look bleak. Meanwhile, Kafka are planning revenge for Circus’s attack. Uro’s replacement, Ryuu, is determined to show utter ruthlessness to prove his worth to Kafka and orders his forces to kill everyone they encounter. A vicious battle ensues – and it’s far from certain who will emerge unscathed from this latest Varuga attack.

Touya Mikanagi really gets into her stride here by seriously upping the ante in these volumes. The Circus combat specialists are forced to fight for their lives as they are ambushed by Varuga, leading to the summoning of ‘Silver’ Yogi, the sweet-natured combatant’s ‘other’ personality. And all the while, the hints increase as to the possible links between the biotechnology that has created the monstrous Varuga also being used in the creation of Nai.

In what begins as a typically frivolous, fun research trip to the Ancient Ocean Mermerai – where, for research purposes, the crew members are required to bathe naked in the warm waters to attract the Peranoa, native marine creatures – Yogi’s underwear goes missing. (Yes, it’s a wonderful excuse for fan service, but…) The thief turns out to be a cat. And the cat turns out to be connected to something – or someone – both sinister and sad. There’s the hint of a parallel with the underwear thief and Nai’s origins; although it’s not ever spelled out in so obvious a way, it gives the reader plenty to think about. And what begins as a farcical hunt for missing panties (no one blushes better than Yogi) turns into something far more dangerous.

As Karneval reaches its fifth volume in Yen Press’s English edition (Volumes 9-10 in the original Japanese) it raises an issue that has been intriguing and annoying me in equal measure. Some manga series which are serialized weekly/monthly manage to maintain a sense of onward momentum, pulling the reader along with the promise that the overarching plot issues set out at the beginning will be resolved and all the mysteries solved. But others dilly-dally along the way, going off down what turn out to be blind alleys and losing the narrative drive that is so important for sustaining reader involvement. I realize that this is often not just the fault of the mangaka; we see in series about the way manga is written and delivered from Monthly Girl’s Nozaki-Kun to The World’s Greatest First Love (okay, these are often emphasizing the crazy/humorous side of the process but nevertheless…) the very significant role played by editors in the final product we get to read.

Karneval is published in Zero Sum, the magazine that has also brought us Loveless, Devils and Realist and 07-Ghost. All of these popular series have been made into anime before the manga was anyway near a conclusion – and this also seems to put the mangaka off their stride in terms of plot development (because why would you, when someone else – the anime script writer – has already finished it off for you or taken it in a different direction from the one you were intending?) Karneval’s strengths lie in its artwork and the character interactions, as young fugitives Nai and Gareki are rescued and then sheltered and educated by the eccentric and colourful crews of both ships of Circus. But the underlying mysteries are developing painfully slowly: who – or what – is Nai? Why was Gareki shipwrecked as a child from what seemed to be a sinister slave ship? Who was responsible for developing the terrifying genetically altered monsters called Varuga? Are Circus really the Good Guys? And how are all these issues related (as they most assuredly are)?

(This cover image is taken from the French Ki-oon edition but is also used on the reverse of Volume 4 from Yen Press.)

It seems that mangaka are very much at the mercy of the popularity of their series (the magazines carry out frequent reader polls). If the series is popular, they’re encouraged to eke out the material as far as it will go. If its popularity starts to wane, editorial pressure is imposed to bring things to a swift (sometimes brutally swift) conclusion. This wreaks havoc for the mangaka in sustaining anything resembling a coherent, satisfying plot. So how well has Touka Miyanagi coped in what is (after all) her first major series (it’s been running for nine years now)? The good news is that she’s really developed as a storyteller. Karneval was full of good ideas at the start but the delivery was rather random at best. A shame, because this may have deterred some readers. But by now the story’s well underway and she’s much better at pacing the action and directing the reader to what’s really important without distracting them with fun but irrelevant stuff (like the charming rabbit and sheep crews on the two Circus ships). Well, most of the time, anyway.

The artwork is just as attractive as before and these trade paperback Yen Press editions are very handsome indeed, with the original colour splash pages and all the delightful extras (including, if you’re a seiyuu fan, the mangaka’s drawings of the cast of the drama CDs and the anime).

If you’re looking for a fantasy steampunk manga with a likable cast of characters and an underlying mystery that needs to be solved, then Karneval is well worth your time – as long as you don’t mind the occasional meander down a plot side-street. 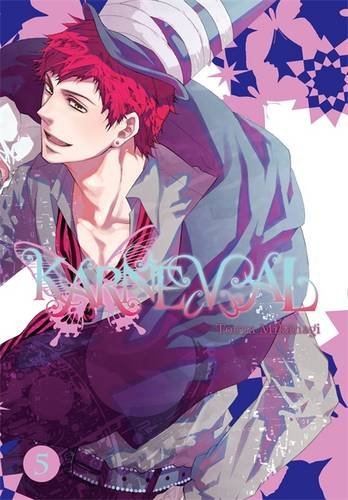