The cover of this book states that this collection is: “Eight new short stories from the creator of Fairy Tail”. However, this only counts as “new” in the sense that this is the first time these stories have been published in English. This collection, which is actually a two-in-one complete edition, dates back to three years before the series we now know as Fairy Tail began.

Most of these stories are fantasies, some with more real-world settings than others. The first, Magician, follows the members of a school magic club which is in danger of shutting down because of a lack of members. We eventually learn that one member of this club has more magical abilities than they seem to have on the surface. It has a nice twist ending and features certain elements now common in Hiro Mashima’s work: for instance, it has the first appearance of Plue, the snowman-like mascot which in this series is actually a dog. This story also won Weekly Shonen Magazine’s “Rookie Prize”, helping him to establish himself.

The second story is the one of most interest: the original pilot for Fairy Tail. While it is still set in a fantasy world, it bears little resemblance to the series we now know, other than its protagonist Silva having the ability to control fire like Natsu Dragneel. The story sees him teaming up with member of a water tribe (whom he cannot touch because if he did they would both be killed) trying to recover a magic book. However it still features plenty of the trademark action you would associate with the series.

Cocona is a more romantic story in which the title character, a devil, decides to visit a druid who can turn her into a human in order to win the affection of someone she is madly in love with. While having a slightly different tone to the other stories, it does still return to the normal fight sequences when Cocona becomes the victim of an evil plot.

Plue’s Adventure II is the oddest work in the collection. It is not really a story, but a game based on Plue in his role in Mashima’s first major successful work, Rave Master, which he was still writing at the time of Playground’s release. Plue’s Adventure I can be found in Volume 16 of Rave Master, and thus this section is more of a bonus for those who have read the original manga.

The second half of the collection begins with Bad Boy’s Song, described by Mashima as his “only set-in-real-ish-life story”, and the only one he hesitated about adding to the collection, given how much it differs in tone to most of his work. Also, while he completed Magician first, this was his first story to be published, so he admits he is not sure which is his debut work. The story, partly based on his own time at school, follows four friends nearing their graduation who decide to leave their mark by forming a band and performing during the graduation ceremony, coming into conflict with some teachers and being embraced by others. The story is perfectly fine in my opinion and adds some diversity to the book, but it is understandable if this is something you were not expecting to read.

MP (Magic Party) is much more similar in tone to Fairy Tail. It actually feels more like the series now than the original pilot, with protagonist Elena having similar looks to Lucy Heartfilia. Elena is attempting to find a book in order for her to qualify as a magic pro. It features more of the standard fight sequences, with Elena’s magic boosting her physical abilities.

Appropriately, given when this review is being written, the next story is of a festive nature. Xmas Hearts is mostly set in a land populated by various different Santas as they prepare to bring toys to children across the world, but rather focuses on one Santa, a boy named Strat, who is not interested in the season and would rather just eat cake. Again, a big fight sequence occurs when some “nightmare” monsters try to stop the Santas from sending their gifts, and Strat is the only one who can save the day.

The final story, Combo Squad Mixture, is a superhero story, following Mafuya Mitsurugi, an incredibly feeble hero who is forced out of his current hero gang and forced to join another one consisting of other failed heroes, who have to try and make themselves as popular with children as fast as they can, otherwise they will be fired altogether. Perhaps disturbingly, when it comes to the only woman in the group, in order to make herself more popular she is told that fan service should be encouraged.

Regarding the best elements of this collection, Mashima’s artwork is up to its normal good standard. There also appear to be no issues with translations on the page done by Kevin Steinbach (Fairy Tail was done by different translator named William Flanagan for those interested), with translation notes released in the back of the book.  Plus there are plenty of notes by Mashima at the end of each story, which provide much of the background information.

However, I would advise that you don’t read this collection all in one go. Many of the stories follow the same basic structure of someone with magical abilities fighting off some wrongdoer, and thus they eventually become a bit predictable. While the Fairy Tail pilot is the main draw for most people, for me it was his earliest works, Magician and Bad Boy’s Song, that were the most interesting: Magician as it demonstrates what would be his signature style of storytelling, and Bad Boy’s Song for being drastically different to everything else in the collection. 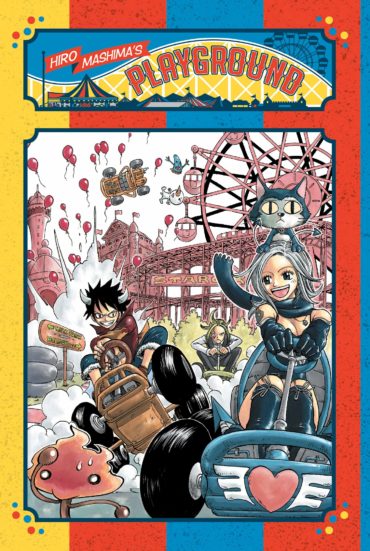