Prince Freya is a series where you can see elements of other works, whether it be from Western fiction like The Prince and the Pauper, or other manga like Yona of the Dawn, Princess Knight or even Ouran High School Host Club. Elements of these stories appear to crop up in which title now out from VIZ Media.

Although VIZ describe the manga as being a fantasy series, you might want to look elsewhere if you are into anything magical as nothing (in this opening volume at least) appears to fit that description. It is a fantasy in the sense that it takes place in a fictional world. However, author Keiko Ishihara says that she is inspired by medieval western fantasies.

The story takes place in a small country called Tyr, which is currently trying to fight off the neighbouring expansionist Sigurdian empire. The title character, Freya, is a girl from a village who spots some Sigurd soldiers nearby. Fortunately, before she is harmed, she is helped by one of Tyr’s greatest heroes. This is Aaron, the “Black Knight” who is one of the personal guards to Prince Edvard, Tyr’s leader. Freya and Aaron’s relationship is a long one, as she once saved Aaron and his brother Aleksi as young children when the boys were held captive by Sigurd. While Aaron is now a guard, Aleksi is currently an ordinary soldier in Tyr’s army.

A few days later, with Aaron and Aleksi leaving the village to return to their duties, Freya is in the countryside where she spies more Sigurd soldiers. She overhears that they have poisoned Prince Edvard and that he is on the verge of death. They also plot to kill Aaron, as the death of both men will mean that Tyr will crumble. Freya goes to the palace where she encounters the dying Edvard, a man who happens to bear a striking resemblance to Freya. So Freya decides to cut her long hair and take the place of the dying prince, tricking Sigurd into thinking that Edvard is well. This results in a battle in the palace grounds, where Aaron is struck with a poisoned arrow before being beheaded – and this is just Chapter One.

While Tyr wins the battle, the death of Aaron and the prince finally succumbing to the poison and also dying, means that Tyr has very few options left. Freya will now have to stand in as Prince Edvard permanently. The only people who know that Freya has taken his place are Aleksi, the commander of Tyr’s armed forces, General Baldr, and another member of Edvard’s personal guards, the “White Knight” Julius Freivalds. Thus sees the start of a new chapter in Freya’s life to protect her home. Among the first steps she takes is forcing Julius to take Aleksi as a pupil.

Given the setting, you can see why the allusion to The Prince and the Pauper comes into play – albeit that in that story the prince in question is the future Tudor king Edward VI, who really did die young. Anime fans may spotted the similarities to the other series mentioned earlier – with Yona of the Dawn having a princess who finds herself struggling when she is displaced from power, Princess Knight with a girl who is forced to act like a prince in order to rule, and even Ouran where the main character is forced to act like a boy all the time. Not only that, but with Freya being surrounded by all of these male characters this does come across as a reverse harem story. You might argue that the Shakespearean manga Requiem of the Rose King has added connections, with the similarities between Freya‘s cross-dressing prince and Requiem‘s intersex Richard III.

You can see that the series will appeal due to all of these different elements. Plus there is also the added action and drama. While this fantasy may not be magical, it does have a lot of fighting in it, with the beheading in battle of Aaron being a truly shocking moment. Reading the opening chapter, you are led to believe that he would probably act as a love interest to Freya, but, alas, it is not to be. Freya is certainly an interesting character. In her first encounter with Sigurd’s soldiers she comes across as a damsel in distress being saved by Aaron, which feels a bit stereotypical, but then you get the fact that she in turn has saved him in the past.

As well as the writing, accompanied by a fine translation by Emi Louie-Nishikawa, Ishihara’s artwork is also appealing. Her depiction of Freya, changing from the country girl to the prince is a gracious one. Plus, the landscape and architecture all add to the look of the work.

It will be interesting to see how the story will now develop, as the first volume ends with Freya coming to the rescue of a kidnapped soldier. Let’s hope for some added intrigue appears as the story progresses. 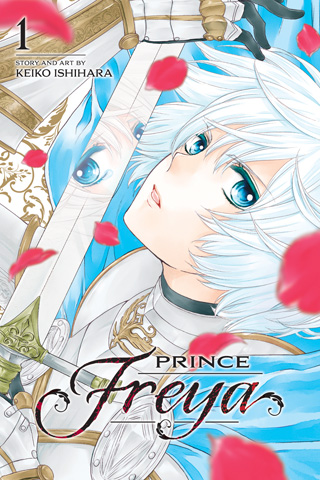